Objective: To determine the prevalence, predictors, and characteristics of health-related internet searches by adult emergency department (ED) patients; to examine the effect of searching on the doctor–patient relationship and treatment compliance.

Design: A multi-centre, observational, cross-sectional study; a purpose-designed 51-item survey, including tools for assessing e-health literacy (eHEALS) and the effects of internet searching on the doctor–patient relationship (ISMII).

Conclusion: Online health care information was frequently sought before presenting to an ED, especially by younger and e-health literate patients. Searching had a positive impact on the doctor–patient interaction and was unlikely to reduce adherence to treatment.

The known Health-related questions comprise the second most searched thematic area in Google, these topics providing 5% of the more than two trillion searches undertaken in 2016.

The new More than one-third of adult patients searched the internet for information on their problem before attending the emergency department; almost half regularly searched for such information, particularly younger and e-health literate patients. Searching had a positive impact on the doctor–patient interaction in most cases, and was unlikely to cause patients to question the diagnosis or advice of their treating doctor.

The implications It may be beneficial for doctors to acknowledge and discuss health-related internet searches with adult emergency department patients.

It has been reported that 43–56% of parents of children presenting to emergency departments (EDs) had searched online for health information at some time,1-3 and that 6–12% had undertaken a health-related search before taking their child to an ED.1-3 How such behaviour affects the doctor–patient relationship during an ED consultation is poorly understood.

Health is the second most frequently searched thematic area in Google, providing almost 5%7 of the worldwide total of more than two trillion searches in 2016.8 Health care providers can apply this information on a population level; for example, ED patient load has been predicted from the volume of website visits during the preceding night,9 and presentations to EDs with flu-like illness have been correlated with search engine metadata for the term “flu”.10

The influence of these searches on the doctor–patient relationship in the ED has not been investigated, but their effect has been studied in other contexts, especially general practice.11 General practitioners respond to internet-derived information described by patients in one of three ways: by reacting defensively and asserting their expert opinion; by collaborating with the patient to analyse the information; and by guiding the patient to reliable health information websites.12 It has been reported that general practice patients regard the internet as a supplementary resource that provides information supporting the doctor’s advice and enhancing their relationship,13 particularly patients who had the opportunity to discuss their online findings.14 However, internet searching can lead to conflict if the patient values internet-derived information above that of the doctor, causing them to ignore their advice.15,16

We undertook a cross-sectional study of adults presenting to the two large metropolitan tertiary centre EDs in Melbourne, at St. Vincent’s Hospital Melbourne and Austin Health, during 1 February – 31 May 2017. During 2016–17, the two EDs respectively received about 46 00017 and 84 00018 patients.

A representative sample of ED attenders was obtained during 60 recruitment shifts: 25 on weekdays (8 am – 6 pm), 25 during evenings (3 pm – 11 pm), and ten on weekends or overnight. Patients presenting to the ED during these shifts were included if they were over 18 years of age, but were excluded if they did not speak English, were prisoners, were unable to participate for medical reasons, or were cognitively impaired as assessed by the researcher (dementia, intellectual disability, psychiatric illness, intoxication, Glasgow coma scale score below 15 throughout emergency admission) (Box 1). Patients were screened for eligibility using triage notes and in person, and were approached for consent after their consultation with the treating clinician.

Participants were advised that their responses would be anonymised. They completed a 51-item purpose-designed survey on paper or on an iPad (SurveyMonkey software). Demographic information collected included age, sex, income, education, first language, country of origin, and e-health literacy. Participants who indicated that they had searched for medical information regularly or for the current presentation also completed the Internet Search effect on Medical Interaction Index (ISMII) and compliance questions, as detailed below.

An extensive literature review found no measures of the effect of health-related internet searching on the doctor–patient relationship. An iterative process was therefore undertaken to develop a suitable measure. The result was the ISMII, a nine-item measure with Likert scale responses ranging from strongly disagree (1) to strongly agree (5). The ISMII includes seven positively worded questions (eg, “Information from the internet allows me to better understand my health provider”) and two reverse-scored negatively worded questions (eg, “Gathering internet health information makes me more anxious”). Each item was analysed individually, and the net effect of searching on the doctor–patient relationship was assessed with the total score. Scores above 27 indicate a positive influence on the relationship, scores below 27 a negative influence. The ISMII has not been formally validated but its face validity is supported by the iterative formation process and its acceptable internal consistency (see ).

The effect of internet searching on treatment compliance was measured with four purpose-designed, frequency-based Likert scale questions, developed with the same iterative process used to create the ISMII; response options ranged from never (1) to always (5).

We calculated that a sample size of 377 patients was required to accurately estimate prevalence with a precision of 5%, assuming an underlying prevalence of 50%.

Regression models were pre-specified to guard against spurious findings. The effect of each demographic variable on the outcome variable “searching for e-health information regarding the problem for which you presented to ED” was assessed in Pearson χ2 tests; if a significant association was found, the variable was included in the regression analysis. A binary multivariable logistic regression model (enter simultaneous method) that included age, sex, country of birth, highest level of education, and e-health literacy assessed the influence of these variables on the likelihood of searching the internet for health information. A multivariable linear regression model (enter simultaneous method) including the same variables (there were no significant associations with this outcome other than with e-health literacy and these demographic variables) assessed their influence on ISMII score.

The internal consistency of the e-HEALS and the ISMII question sets were assessed with the Cronbach α statistic; α ≥ 0.7 was deemed acceptable for analysing total scores.

The median number of searches by the 139 patients who searched regarding the problem for which they presented to the ED was three (interquartile range [IQR], 2–6); the median time spent searching was 20 minutes (IQR, 10–60 min). Searching was less prevalent closer in time to ED presentation; 86 searches (62%; 96% CI, 59–70%) were conducted more than 24 hours before presentation, compared with 12 searches (8.6%; 96% CI, 5.0–14%) while waiting in the ED (Box 5). Most searches were performed on smartphones (76%) and used the Google search engine (94%), primarily to search for information on symptoms (68%) or treatment (51%) (Box 5). The types and specific internet sites visited and trusted by patients are summarised in Box 6.

Search effect on the doctor–patient relationship

We found that almost half of our sample of adult ED patients regularly searched the internet for health-related information, and more than one-third undertook a search regarding their presenting problem before attending the ED. Three earlier studies that examined search behaviour found that 24.5%20 and 45.8%11 of patients specifically searched for information on their current health problem before presentation, comparable with the 34.8% prevalence we found. The studies that found highest rates differed from ours methodologically; one, for example, excluded patients referred by general practitioners or delivered by ambulance.11

Some studies have identified that being female21 or younger22 is associated with a greater likelihood of seeking information from other health professionals, family, or online before presenting to an ED. However, other studies,20 like ours, have not found sex to a significant factor. We found that e-health literacy was a significant predictor of searching before presenting to an ED, indicating that those who are confident about internet-derived health information are more likely to seek it before they obtain professional assistance.

We found that searching the internet for information before presenting to an ED generally had a positive effect (from the patient’s perspective) on the doctor–patient interaction. Specifically, patients reported they were more able to ask informed questions, communicate effectively, and understand their health provider. This indicates that searching before attending an ED may have a positive effect by informing patients and improving communication between patients and health practitioners, consistent with earlier findings.11,13,14 In addition, it was shown that searching does not usually reduce the patient’s confidence in the diagnosis or treatment plan provided by the practitioner, nor is it associated with reduced compliance with these treatment plans. However, some patients reported that searching increased their anxiety, and this should be acknowledged by practitioners during the consultation.

Strengths of our study included the good response rate during recruitment from two large metropolitan public tertiary referral centres with differing demographic profiles. The age distribution of the sample was similar to that of all adult patients attending Victorian EDs.23 These strengths, in addition to the employment of the validated eHEALS tool, mean that our findings may be applicable to the broader Australian ED population.

The participating EDs did not generally receive pregnant patients, and patients presenting with psychiatric problems were excluded for ethical reasons, although people with a history of psychiatric illness but presenting for a physical problem were included. The development and first use of the ISMII questionnaire, and its lack of formal validation and largely quantitative nature are further limitations.

More than one-third of adults presenting to two Melbourne EDs had searched the internet for information on the problem for which they had presented to the ED; nearly one-half had regularly sought health information on the internet, particularly younger and e-health literate patients. Searching for online health information had a positive impact on the doctor–patient relationship, particularly for patients with greater e-health literacy, and was unlikely to cause patients to doubt the diagnosis by a practitioner or to affect adherence to treatment. We therefore suggest that doctors acknowledge and be prepared to discuss with adult ED patients their online searches for health information.

Box 1 – Flow of participants through recruitment for survey 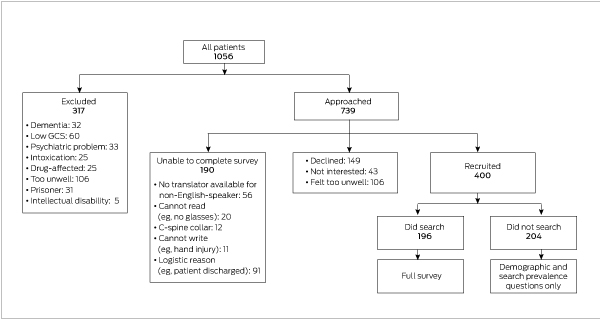 Box 8 – Linear regression analysis: effect of Internet Search on Medical Interaction Index (ISMII) total score, for 195 patients who searched regarding the problem for which they presented to the emergency department