Objectives: To compare the prevalence of multimorbidity and its impact on mortality among Aboriginal and non-Aboriginal Australians who had been hospitalised in New South Wales in the previous 10 years.

Design, setting and participants: Cohort study analysis of linked NSW hospital (Admitted Patient Data Collection) and mortality data for 5 437 018 New South Wales residents with an admission to a NSW hospital between 1 March 2003 and 1 March 2013, and alive at 1 March 2013.

The known Aboriginal and Torres Strait Islander Australians have a lower life expectancy and a higher burden of disease than non-Indigenous Australians, but it is not known whether the prevalence of multimorbidity is also different.

The new The prevalence of multimorbidity was higher among Aboriginal than non-Aboriginal patients in all age groups. This difference accounts for a large proportion of the difference in one-year mortality between the two groups of patients.

The implications Implementing evidence-based, integrated care should be a high priority for Aboriginal and Torres Strait Islander Australians, particularly focusing on reducing the prevalence of mental and combined mental and physical comorbidity.

Australia is currently ranked sixth among OECD nations for life expectancy at birth.1 This excellent health status is not shared by all Australians: the life expectancy at birth of Aboriginal and Torres Strait Islander people is estimated to be 11.5 years lower for men and 9.7 years lower for women than for other Australians.2 The burden of disease for Aboriginal and Torres Strait Islander Australians (as measured in disability adjusted life years [DALYs]) is more than twice that of other Australians, and non-communicable diseases are responsible for 70% of the difference.3

This greater burden of disease is attributable to the higher prevalence of conditions such as diabetes and kidney disease4 as well as to higher rates of comorbidity,5-7 which have been linked with higher mortality7 and less intensive treatment5 than for age-matched non-Aboriginal Australians. Further, deaths with multiple causes are more frequent among Indigenous than non-Indigenous Australians.4

Multimorbidity, or the presence of two or more chronic morbidities in an individual,8 is increasingly recognised as a challenge to the current focus of health systems on single diseases and clinical specialities.8,9 A representative national survey found that nearly half the patients attending general practices in Australia had multiple chronic diseases (47.4%, equating to 32.6% of the general population).9 The only assessment of multimorbidity in Indigenous Australians found a higher prevalence of multimorbidity among Aboriginal people attending a Fremantle street health clinic serving a marginalised population than among its non-Aboriginal patients (50.4% v 44.6%).10

The aims of our study were to compare the prevalence of multimorbidity and its impact on mortality among Aboriginal and non-Aboriginal Australians in New South Wales who had been hospitalised at least once during the previous 10 years. Given the small proportion of Torres Strait Islander people in the NSW hospital data (0.1%),11 in this article we use the descriptor “Aboriginal” to refer to the original people of NSW and their descendants.

The NSW Admitted Patient Data Collection (hospital data) was linked to NSW Registry of Births, Deaths and Marriages mortality data (deaths data). The hospital data included all public and private hospital admissions ending in a discharge, transfer, type change, or death. Diagnoses were coded according to the International Statistical Classification of Diseases and Related Problems, 10th revision, Australian modification (ICD-10-AM). The mortality dataset captured all deaths registered in NSW. Probabilistic linkage of data extracts was performed by the NSW Centre for Health Record Linkage (CHeReL, www.cherel.org.au), who supplied de-identified records to the investigators.

Thirty target morbidities, classified as physical or mental, were selected from the Elixhauser and Charlson Comorbidity Indices.13 Some morbidity categories were grouped (eg, complicated and uncomplicated hypertension) or split (eg, multiple sclerosis and epilepsy/convulsions were each separated from “other neurological disorders”), and one was added (chronic ischaemic heart disease) (online Appendix, table 1), all according to recent recommendations.8,14 If a target morbidity was coded in any hospital admission diagnosis field at least once during the lookback period, it was recorded as being present on 1 March 2013. Multimorbidity was defined as having two or more morbidities. Patients with no target morbidities coded in a hospital admission record were classified as having no morbidities at 1 March 2013. Indicators were constructed from combinations of morbidities, such as mental and physical comorbidity and cumulative morbidity count.

Potential covariates examined included age at 1 March 2013 (in 5-year age groups and in three broad age groups), sex, and quintiles of socio-economic status according to the Australian Bureau of Statistics Socio-Economic Indices for Areas (SEIFA) Index of Relative Socio-economic Advantage and Disadvantage (IRSAD), based on geocoded Census Collection District of residence.15

The primary outcome was the presence or absence of multimorbidity during the 10-year lookback period. The secondary outcome was mortality in the 12 months from 1 March 2013 to 1 March 2014 (follow-up period), as ascertained in linked death records.

The study was approved by the NSW Population and Health Services Research (reference, 2009/03/141) and the Aboriginal Health and Medical Research Council (reference, 684/09) Ethics Committees.

Of the 5 437 018 NSW residents alive at 1 March 2013 and who had been admitted to hospital during the previous 10 years, 117 999 (2.2%) were Aboriginal Australians; 54% were female (online Appendix, table 2). The age profile of Aboriginal patients was skewed to younger age groups compared with that of non-Aboriginal Australians (Box 1), and a greater proportion lived in the most disadvantaged areas (lowest quintile, 55% v 18%; online Appendix, table 2).

The numbers of morbidities per person increased with age, but was higher in all age groups for Aboriginal Australian patients, particularly from the age of 25 years; the difference declined from around 75 years of age as the prevalence of multiple morbidities among non-Aboriginal people increased (Box 3).

The rate ratio for multimorbidity (Aboriginal v non-Aboriginal Australians), adjusted for age group, sex, and socio-economic status, was 2.59 (95% CI, 2.55–2.62). After adjusting for the same covariates, the hazard ratio for mortality within a year was 2.43 (95% CI, 2.24–2.62); after also adjusting for morbidity count, the hazard ratio was 1.51 (95% CI, 1.39–1.63). We also examined the effect of geographic location (rurality), but found that socio-economic status was more strongly associated with multimorbidity and mortality, and that including both socio-economic status and rurality as covariates led to instability in the coefficients for rurality (a reduction or reversal in direction of effect) caused by multicollinearity. The relative hazard of one-year mortality (v people with no morbidities) increased with the number of morbidities, from 3.83 (95% CI, 3.69–3.98) for one morbidity to 22.8 (95% CI, 21.8–23.8) for eight or more morbidities (online Appendix, table 4).

Our estimates of multimorbidity were lower than recent estimates based on a sample of patients attending Australian general practices (47.4% of the study sample and 32.6% of the general population).9 This is not unexpected, given that many chronic diseases are treated outside the hospital system. A validation study comparing self-report and recording of morbidities in NSW hospital data found good agreement for rates of diabetes, and fair agreement for heart disease, stroke, and hypertension.19 Our prevalence estimates should be viewed in this context. There is currently no alternative population-based resource for comparing the prevalence of multimorbidity across age groups by Indigenous status, and our study provides a valuable insight into the complex morbidity profiles of Aboriginal Australians. The 10-year lookback period was chosen to maximise ascertainment of morbidities; however, some conditions may have resolved by the time of follow-up.

We found that one-year all-cause mortality increased with the number of morbidities. A systematic review of the impact of multimorbidity on mortality among older adults found that it increased the risk of death, no matter how multimorbidity was defined.20 Detailed analysis of cause-specific mortality was beyond the scope of our study; difficulties in attributing deaths to specific morbidities mean that it has also not been investigated elsewhere.

Challenges for patients with multimorbidity include communication with health care professionals, their involvement in decision making, coordination of care, assistance with self-care, and focusing on holistic and continuing care.21 These challenges are exacerbated for Aboriginal and Torres Strait Islander people by discrimination and prejudice in mainstream care and difficulties in accessing culturally safe and appropriate care.22 A qualitative study found that sustained engagement of Indigenous people with health care providers was most likely when they felt that the health care service was part of the community and the staff were Indigenous Australians or had a willingness to understand the cultural, community and kinship contexts of the community.23 Providing high quality care and evidence-based interventions, particularly interventions targeting alcohol and other substance use disorders, is crucial to reducing multimorbidity among Aboriginal and Torres Strait Islander Australians. Unfortunately, there have been few quality evaluations of interventions for substance use disorders in these populations.24 Further, the weathering and premature ageing of Indigenous Australians are as related to poverty and stress as to poor access to health care, so it is vital that the societal position of Aboriginal and Torres Strait Islander Australians be improved, that poverty and disadvantage be eliminated, and that the social determinants of health — including early development, education, employment, and income — be improved to remove the disparities in multimorbidity and mortality between Indigenous and non-Indigenous Australians.25 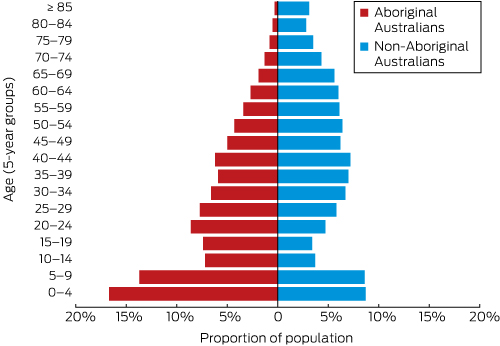 Box 3 – Numbers of morbidities for non-Aboriginal (A) and Aboriginal (B) patients, as proportions of patients in each 5-year age group 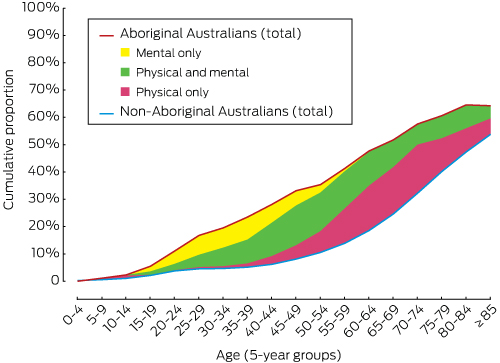 * The shaded areas between the two curves correspond to the difference between Aboriginal and non-Aboriginal Australians in the age-specific prevalence of, for example, mental multimorbidity.

This investigation was supported by the National Health and Medical Research Council (573113). We acknowledge the NSW Ministry of Health and NSW Register of Births, Deaths and Marriages for allowing access to the data, and the Centre for Health Record Linkage for conducting the probabilistic linkage of records.