Conclusions: The number of children who presented to Victorian public hospital EDs for mental health problems increased during 2008–2015, particularly for self-harm, depression, and behavioural disorders.

The known Mental health disorders in children and adolescents are common, but their impact on presentations to emergency departments (EDs) is unknown.

The implications The number of children presenting to EDs with mental health problems is rising. The reasons should be determined so that mental health care for young people can be improved.

Mental health and substance use disorders are the leading cause of disability in children and young adults worldwide.1 Over a 12-month period, 14% of 4–17-year-olds in Australia — 580 000 children and adolescents — are experiencing mental health problems.2 Mental health disorders during childhood have adverse effects throughout life,3,4 and the onset of 50% of all mental disorders occurs before the age of 14 years.5

Australian children receive mental health care from a variety of community-based organisations,6 but it has been anecdotally reported that an increasing number of children and young people are presenting to emergency departments (EDs) with mental health problems. This is worrying; while EDs are equipped to help children who self-harm or take drug overdoses, they are usually noisy, stimulating environments, not conducive to calming agitated patients.7 Further, patients who require mental health care can disturb the routine and flow of the ED, and can place a greater demand on resources than medical or trauma patients.7 Specialised screening tools and mental health consultants trained in paediatric medicine can reduce the likelihood of hospitalisation and the length of stay in the ED, and also ease security problems,8 but they are not available in all EDs.8,9

Two Australian studies have assessed presentations to EDs by children for mental health problems; both were undertaken more than ten years ago and were single site, cross-sectional studies in tertiary level paediatric EDs. An audit during 2002–03 found that children with psychological emergencies accounted for 0.5% of all presentations over a 10-month period, and that they were more likely to be admitted to hospital than other ED patients.10 A retrospective review in another ED over the same period identified 203 adolescents aged 12–18 years with mental health problems, 47% of whom were admitted to hospital.11 A national study in the United States found that the number of ED visits for mental health problems by children aged 10–14 years increased by 21% during 2006–2011, with a 34% increase for substance-related disorders and a 71% rise for impulse control disorders.12

Mental health problems may place a greater burden on EDs than physical health presentations in terms of triage category, length of stay, proportion meeting the National Emergency Access Target (NEAT) of being admitted or discharged within 4 hours,13 and admission rates. A multi-site study in the US found that paediatric patients with mental health problems were up to three times more likely to be admitted to hospital than patients of the same age with physical problems,14 while another multi-site study found that they were more likely to stay in the ED longer.15

Data were obtained from the Victorian Emergency Minimum Dataset16 (VEMD) for the financial years 2008–09 to 2014–15. The VEMD is a standardised state dataset comprising de-identified demographic, administrative, and clinical data for presentations to Victorian public hospitals with 24-hour EDs. However, diagnostic codes are usually entered by clinicians who have limited training in coding, which can compromise the diagnostic accuracy of the dataset.17

Variables obtained from the VEMD included presentation data (eg, length of stay), departure status (eg, admission), demographic data (eg, age, sex), and diagnosis (full list: online Appendix). Data were collected for children and adolescents aged 0–19 years who presented to general or children’s hospitals; it was assumed that young people with mental health problems would not have visited specialty hospitals (eg, maternity hospitals). Hospital campus data were coded by VEMD as metropolitan or rural in a manner that prevented identification of individual patients.

We calculated the absolute number of mental and physical health presentations by children and adolescents to Victorian EDs for each 12-month period. As it was possible that shifts in the age and sex distributions of the general population contributed to changes in ED presentation numbers, we examined annual trends in population growth for Victoria, by VEMD age band and sex, using Australian Bureau of Statistics data for the 7 years assessed.18

Mental health presentations were defined as those leading to an F group diagnosis (F00–F99, Mental and behavioural disorders) according to the International Classification of Diseases, revision 10, Australian modification19 (ICD-10-AM) or a diagnosis of intentional self-harm. As there is no ICD-10-AM diagnostic code for self-harm, we identified these cases by a primary diagnosis of any physical injury together with coding of human intent equal to intentional self-harm. Differences in the numbers of mental and physical health presentations between the first and last years of the study period were expressed as percentages.

We transformed the Statistical Local Area score in the VEMD to a quintile on the Socio-Economic Index for Areas (SEIFA) — Index of Relative Socio-Economic Advantage and Disadvantage (IRSAD).20 The IRSAD is an index of economic and social conditions of people and households in an area, based on census data; a lower score corresponds to greater disadvantage.21

We compared patient and presentation characteristics associated with mental and physical health presentations for each financial year. The independence of categorical variables was assessed in χ2 tests. All data were analysed in R 3.3.2 (R Foundation for Statistical Computing).

Over the 7-year period, the number of children aged 0–9 years in Victoria increased, but there was only a negligible increase in the older age groups in which the number of mental health presentations had increased (data not shown). The numbers of girls and boys in Victoria each increased by 1.07% per annum over the 7 years, but the proportion of boys who presented to an emergency department with a mental health problem decreased while that of girls increased (Box 2); further, the presentation rates for self-harm, stress-related, mood, and behavioural and emotional disorders each increased markedly over the study period (Box 3).

Relative burden of mental and physical health presentations during 2014–15

Our study had several strengths. While other authors have reported the increasing number of children presenting to Victorian EDs,23,24 our data extend this work by differentiating between trends in the relative proportions and burdens of mental and physical health presentations. While there were some changes to ICD-10-AM coding during the study period, their impact would have been minimal; we examined broad diagnostic categories rather than individual diagnoses, and commenced analyses during the 2008–09 financial year, when diagnoses related to depression became available. Coding of diagnoses in VEMD data are not independently verified by third party assessors, but their integrity is regularly assessed by an external advisory group.

Our study was limited by the quality of the VEMD data, particularly by inaccuracies in diagnostic coding, as codes are generally entered by busy clinicians with limited training in coding.17 Data on presentations to private EDs (around 20% of Victorian EDs that receive children25) were not available because private EDs are not required to supply data to the VEMD. In addition, we could not compare the characteristics of presentations to community and paediatric hospitals, as hospital campus coding was applied in the dataset. Investigating these differences is important, as presentation characteristics, hospital resources, and management of paediatric mental health presentations may differ between the two hospital types. Further, the VEMD captures only one diagnosis per presentation, as a result of which some physical health presentations (eg, abdominal pain) by patients with underlying mental health problems (eg, anxiety) were probably excluded from the mental health presentation category. Finally, although attention deficit/hyperactivity disorder is the most common mental health diagnosis in Australian young people,2 the VEMD does not include an ICD-10-AM code for this diagnosis.

Mental health disorders in children and adolescents account for an increasing number of presentations to EDs, with particularly large increases in the numbers of presentations for depression and behavioural problems. In the 2013–14 Australian Child and Adolescent Survey of Mental Health and Wellbeing (completed by 6310 caregivers of children aged 4–17 years, 13.9% of whom were assessed as having had a mental disorder during the previous 12 months), 39.6% of those who did not seek help for their children’s mental health problems did not know where to obtain help, while 36.4% were uncertain whether assistance was necessary.22 General practitioners were the most common source of professional help, but they typically referred children to specialist services that often involved out-of-pocket costs that caregivers could not afford. All these factors may delay treatment, resulting in crisis presentations to EDs.

Potential solutions include public health campaigns to improve recognition by caregivers of the symptoms of mental health problems in children and awareness of where to seek help. Providing GPs with skills and financial resources for managing social, emotional and behavioural problems during early childhood is also important. While Headspace provides mental health services for those aged 12–25 years, our data suggest that younger children need more help. Hubs of care for younger children should include clinicians who offer not only co-located services, but also outreach support to the community and schools to share their expertise and, ultimately, to reduce the number of children who present to EDs with mental health problems. 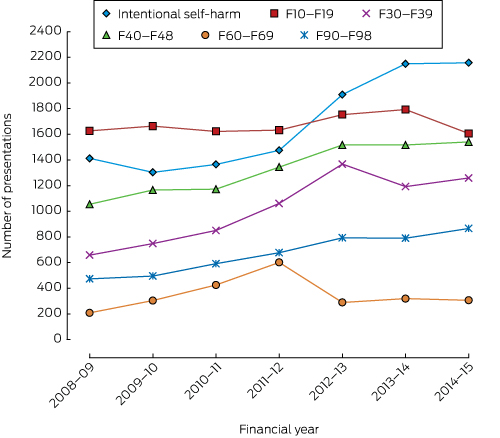 Box 2 – Characteristics of people aged 0–19 years who presented to Victorian emergency departments, 2008–09 to 2014–15, for mental or physical health problems