Objectives: To investigate the incidence and demographic features of anterior cruciate ligament (ACL) reconstructions in Australia by age and sex, and to determine whether the incidence has changed during the past 15 years.

Conclusions: The increasing incidence of ACL reconstructions in young Australians over 15 years is worrying. The individuals at greatest risk are men aged 20–24 years and women aged 15–19 years; the rate of reconstruction is increasing most rapidly among those aged 5–14 years. Revision rates are increasing more rapidly than those of primary reconstructions.

The known Rupture of the anterior cruciate ligament (ACL) is a common and devastating injury that is largely preventable by neuromuscular agility training.

Rupture of the anterior cruciate ligament (ACL) is a common and debilitating injury that typically results from a non-contact event in which a previously healthy individual changes direction at speed while playing a multi-directional sport. ACL ruptures were once thought to be uncommon in the skeletally immature,1 but recent evidence suggests that the global burden of ACL injury falls increasingly on adolescents and young adults.2,3 The short term consequences of ACL rupture include the inability to participate in sport, reconstructive surgery, and prolonged rehabilitation.4 In the long term, regardless of whether or not an ACL reconstruction is performed, almost all individuals who tear an ACL are at increased risk of osteoarthritis and disability,4-6 and this risk is substantially increased by concurrent meniscal injury.4

Descriptive analyses of population-based data indicate that the incidence of ACL reconstruction in Australia is among the highest in the world.2,7 Recent analyses of data in Victorian injury databases have found increasing rates of sport-related hospitalisations and lower limb injuries in older children and young adults,3,8 but it is uncertain whether this trend applies to the entire country, is confined to younger people, or is sex-specific.

Several studies have found that neuromuscular agility and proprioceptive training programs are effective as preventive measures, averting 50–80% of ACL injuries.9-11 Sports injuries, particularly ACL injuries, are emerging as an internationally recognised public health problem, making it vital that the demographic features associated with an increased risk of ACL injury are characterised.

Longitudinal data for ACL reconstructions were extracted from the National Hospital Morbidity Database (NHMD) of the Australian Institute of Health and Welfare (AIHW) (http://www.aihw.gov.au/hospitals-data/procedures-data-cubes). The NHMD comprises confidential electronic record summaries for episodes of care provided by state and territory health authorities, including data from public and private hospitals, as well as from private surgical centres. The database affords national coverage of information on inpatient hospital treatments, with a negligible proportion of missing data (0.004% of cases per year).12 The database collects information on the type of procedure (according to the International Statistical Classification of Diseases and Related Health Problems, 10th revision, Australian modification [ICD-10-AM]13 and the third to eighth editions of the Australian Classification of Health Interventions [ACHI]14), year of procedure, sex and age group of patient, and whether the procedure required day or overnight admission.

ACL incidence rates were expressed as number per 100 000 population for each year of the study, based on Australian Bureau of Statistics population figures.15

The base data for this investigation were de-identified data publicly available from the AIHW. Our investigation was therefore granted exemption from formal ethics review by the Griffith University Human Research Ethics Committee.

According to the 2017 variance report of the Royal Australasian College of Surgeons and Medibank, the average direct hospital and surgery cost per ACL reconstruction was $8364.16 The estimated direct costs of primary ACL reconstruction surgery in 2014–15 were $142 million. This figure does not include the rehabilitation, disease burden, and societal costs associated with the injury.

Our calculated primary ACL reconstruction incidence of 77.4 per 100 000 population is the highest population-adjusted rate in the world; lower rates in comparable Organisation for Economic Cooperation and Development (OECD) nations include those for the United States (52), New Zealand (37), Denmark (38), Norway (34), and Sweden (32 per 100 000 population).7

We identified age and sex differences in the incidence of ACL reconstruction surgery, with the peak incidence in males being for a slightly older age group and 73% higher than the peak incidence in females. This is consistent with studies that have reported higher rates of ACL reconstruction in males,2,18,19 despite females being two to ten times more likely to rupture their ACL when participating in high risk sports such as basketball and soccer.20,21 It is conceivable that the higher incidence in males reflects greater participation in sports such as Australian rules football, in which pivoting, jumping and rapid deceleration increase the risk of ACL injury.22 That the peak incidence for females is in a younger age group is consistent with their higher rates of sports participation during early adolescence, declining when they reach 18–24 years.23

ACL rupture imposes a considerable health burden on a young and active population. We identified an annual incidence growth in its incidence for Australians under 25 of 3.8%, compared with 1.7% for those over 25. Moreover, growth in reconstruction incidence was most rapid for boys (7.7%) and girls (8.8%) aged 5–14 years, although it should be noted that the base ACL reconstruction incidence in this age group was low. The increased incidence in children is nevertheless of particular concern, as ACL injury in this age group was previously rare. The burden of future degenerative disease falls most heavily on our youngest patients.24

The rising incidence of ACL reconstruction during 2000–2015 can be attributed to several factors, including increasing medical and public awareness of the procedure, diagnostic improvements, the availability of magnetic resonance imaging, and increased access to orthopaedic surgeons.3,25,26 About 72% of ACL reconstructions in Australia are sport-related; the sports most frequently involved are Australian rules football, rugby union, rugby league, netball, basketball, soccer, and skiing.2,4 The rise of ACL injury in young people has been attributed to earlier specialisation by younger athletes, longer sporting seasons, more intense training, higher levels of competition,1 and a lack of free play.25-27

The costs of ACL injury can be divided into direct and indirect costs. We estimated the direct hospital costs for ACL reconstructions were $142 million in 2014–15, a substantial cost to the health care system that is growing with the incidence of ACL injuries. Despite the considerable direct hospital costs, ACL reconstruction surgery is significantly more cost-effective than rehabilitation alone in both the short and long term, with patients experiencing greater improvements in quality-adjusted life-years at a lower cost.28 An American group calculated the average lifetime costs to society per ACL rupture to be $US88 938 with rehabilitation only and $US38 121 with ACL reconstruction.28 In young people, delaying ACL reconstruction surgery or opting for non-operative management is associated with significantly poorer outcomes in both the short and long terms.29

Nevertheless, prevention is much more cost-effective than either ACL reconstruction or rehabilitation. Establishing a national ACL injury prevention program has been reported as a cost-effective strategy for improving sporting health outcomes for young Australians, with low barriers to implementation.4 In addition to reducing health care costs, prevention programs allow athletes to avoid the consequences of injury, including reduced functional capacity because of pain, chronic knee instability,28 and time away from work or education.30 In the longer term, the future complications of osteoarthritis4 can lead to loss of productivity, fewer employment opportunities, reduced social interaction, and lower quality of life.31

The link between ACL injury and knee replacement later in life is also important.5,6 The incidence of knee replacements in Australia is high compared with other OECD nations, and it is expected to continue to increase.32 An estimated annual loss of $9.4 billion in GDP has been attributed to early retirement caused by arthritis in Australia.33 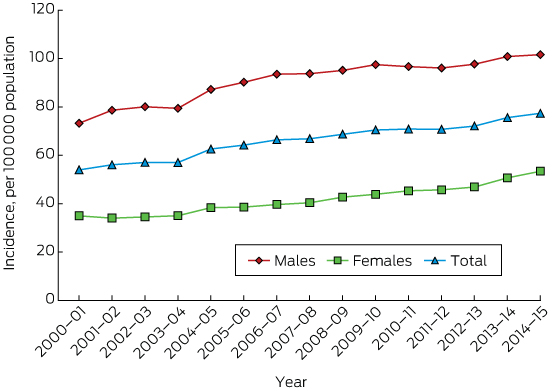 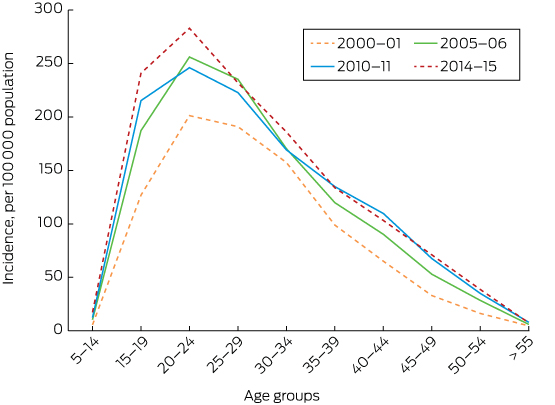 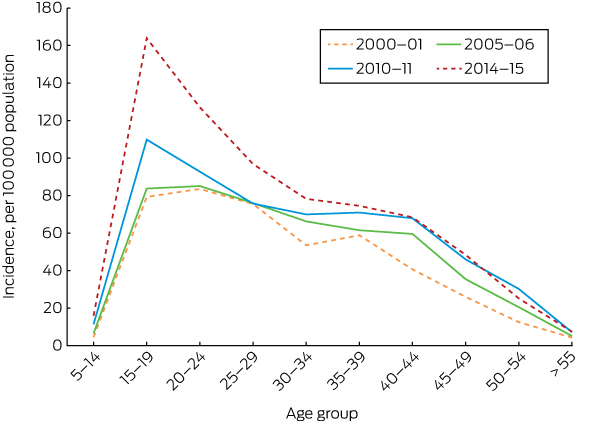 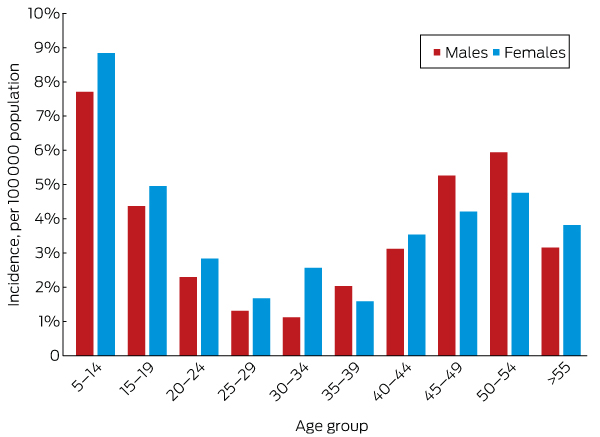 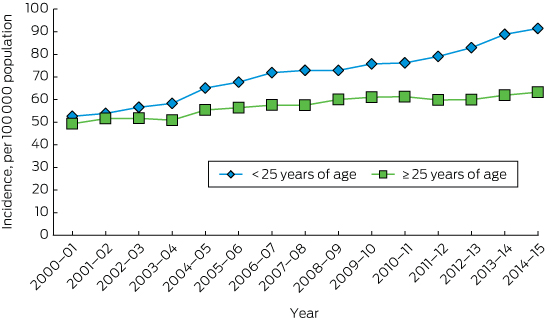 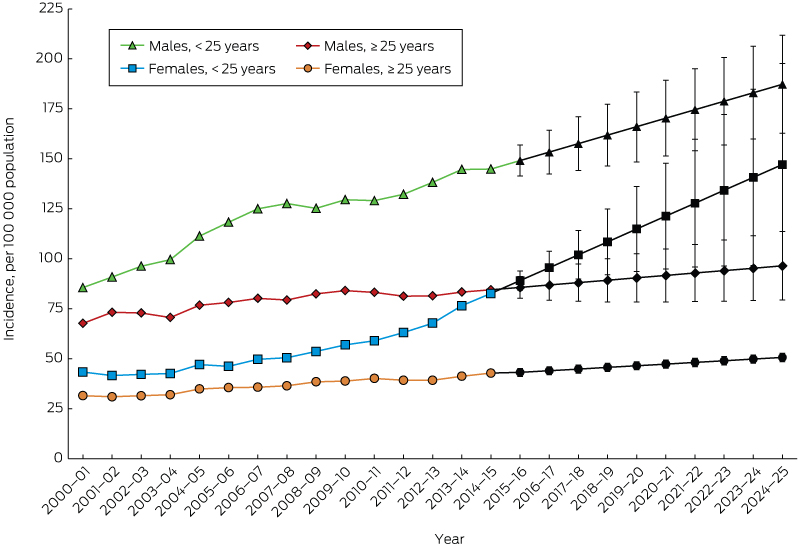 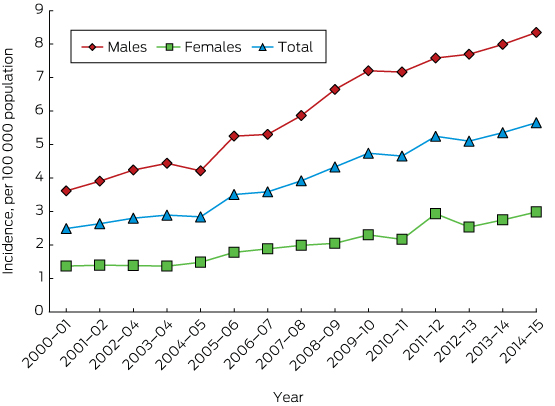