Objective: To determine the frequency of general practice administrative encounters, and to determine whether they represent low value care.

Design: Secondary analysis of data from the Bettering Evaluation and Care of Health (BEACH) dataset.

Participants: An annual nationally representative random sample of about 1000 GPs, who each recorded the details of 100 consecutive encounters with patients.

Conclusion: Most patients requested certificates, medications and referrals in the context of seeking help for other health needs. Additional health care, particularly for chronic diseases, was provided at most GP administrative encounters. The MBS Review should consider the hidden value of these encounters.

The review by the Australian government of the Medicare Benefits Schedule (MBS) has triggered conversations about maximising the efficiency and effectiveness of health care for the Australian community, particularly about how “low value care” should be defined, and by whom.1 The interim report of the MBS Review Taskforce defines low value care as “use of an intervention where evidence suggests it confers no or very little benefit on patients, or risk of harm exceeds likely benefit, or, more broadly, the added costs of the intervention do not provide proportional added benefits.”2

The MBS Review Taskforce interim report highlighted a perception among those who responded to the consultation survey that visits to general practitioners for medical certificates, repeat prescriptions and referrals (ie, administrative visits) were of low value, and subsequent media reports suggested that such visits were responsible for a health budget “blowout”.3 The interim report noted that the respondent group of health professionals during the consultation process was dominated by allied health care providers with an interest in having more of their services available through the MBS without patients requiring a referral from a GP.2 Media controversy and a Twitter campaign followed a radio interview by the Health Minister that coincided with the report's release.

Little information, however, is available about whether administrative visits to GPs actually represent low value care. The concept of low value care had its inception in the United States, from where the “Choosing Wisely” campaign has spread to many countries, including Australia. We should be judicious about how we allocate health resources and minimise harm to our patients, but the role of the GP in care coordination deserves greater consideration, particularly as people in our ageing societies are living longer with chronic disease. GPs in Australia are trained to take the initiative in preventing disease and promoting healthy practices, and to provide patient-centred, holistic care.

In the study reported in this article, we investigated whether administrative visits to GPs for medical certificates, repeat prescriptions and referrals met the definition of low value care cited by the interim report of the MBS Taskforce.2 We analysed data from the Bettering Evaluation and Care of Health (BEACH) dataset. This dataset documents the range of problems managed by GPs during these encounters and the types of management subsequently undertaken, providing a unique resource for exploring the frequency of these visits and assessing whether they represent low value care. Further, we investigated whether an opportunity cost might be associated with shifting administrative, medication and referral tasks from GPs, as doctors can deliver additional health care to patients during visits for these purposes.

We analysed BEACH data collected during April 2000 – March 2016. BEACH was a continuous national, cross-sectional survey of GP activity in Australia. Its methods have been described in detail elsewhere.4 Briefly, each year about 1000 randomly sampled GPs recorded on structured paper forms the details of 100 consecutive encounters with patients who had provided consent. About 80% of the GPs who agreed to participate provided complete data records each year. The age and sex distributions of patients at consultations included in the BEACH surveys accurately reflected the age–sex distribution of patients at all GP service encounters for which Medicare claims had been made.4

Details recorded for each encounter included the patient’s characteristics, one to three reasons (given by the patient) for the encounter, problems managed (one to four), medications (prescribed, advised, or supplied), pathology or imaging tests ordered, and any other clinical or procedural management actions provided by the GP. All actions were directly linked by the GP with the problem managed. The reasons for the encounters, problems managed, clinical and procedural treatments, referrals, pathology and imaging test orders were classified according to the International Classification of Primary Care (version 2) (ICPC-2)5 after being coded according to Australian ICPC-2 PLUS terminology.6,7 ICPC-2 has a biaxial structure, with 17 chapters for body systems on one axis (each with an alphabetic code) and seven components on the second (individual items denoted by numeric codes).

During the data collection period assessed by this study (April 2000 – March 2016), the BEACH program was approved by the Human Research Ethics Committee of the University of Sydney (reference, 2012/130). The Australian Institute of Health and Welfare Ethics Committee approved the BEACH study during the period the two organisations were affiliated (2000–10).

At 57.9% of the general practice visits during 2015–16 for which a medication request was one of the reasons, further health care beyond that requested was provided, including advice, counselling and education (23.4% of all encounters) and pathology test ordering (16.7%). Additional health care was also provided at 35.5% of medication only request encounters, including advice, education and counselling (15.8%) and pathology test ordering (9.2%) (Box 2).

A substantial proportion of administrative tasks for Australian GPs involve care planning and coordination. Visits to GPs motivated by medication requests often resulted in the GP affording additional health care, including managing other problems, providing education and advice, and pathology testing. The most common problems managed at the potentially low value care only encounters were chronic diseases, for which continuity and coordination of care are important. Depression was the problem most frequently managed at referral request only encounters; this is probably associated with the GP completing mental health care plans that enable patients to receive subsidised care from a psychologist as part of the management.

There are very few alternative sources of encounter data with which to compare our findings, but it is widely recognised that achieving the highest quality health care possible requires that value-based health care be patient-focused and that health resources be judiciously allocated.8-10 Identifying and defining low value care continues to be challenging.10 The high proportion of administrative request encounters at which care planning and coordination were undertaken (35.4%) is encouraging, given the evidence that they can improve health, self-management and psychological outcomes in patients with long term health conditions.11 As the workload in this area increases for GPs, however, the MBS review must ensure that care planning continues to be comprehensive, intensive and integrated, as this maximises its benefits. Calls for direct access of patients to allied health care claimable from Medicare must be considered carefully by the review to ensure that any loosening of controls is consistent with the evidence for its benefit and safety.

It has been suggested during the review and in the media that pharmacists should be permitted to directly provide health certificates and medications to patients.12 However, our results indicate that most medication requests to GPs result in additional health care being provided during the visit. Losing this important opportunity for comprehensive and integrated care could be detrimental to patients.

We were not able to fully explore the role of health care stewardship by GPs, but this important aspect deserves greater attention before policies are changed. Direct access to specialists and allied health care may increase health care costs, and potentially undermine the important coordination role we have highlighted. Recent studies in the United Kingdom and the Netherlands have underlined the importance of strengthening the stewardship by GPs of patients’ access to medical specialists, and their authors have called for caution in reducing their gatekeeper role.13,14

In summary, our results suggest that most GP administrative encounters included hidden value care rather than low value care, as frequently more than one problem was managed, care was coordinated, and treatment effects were monitored. To shift the administrative, medication and referral tasks of GPs to other members of the health care team may further fragment care for patients with chronic disease, responsible for the largest proportion of these visits in our study.

We found no evidence that GP administrative encounters with patients seeking certificates, medications and referrals should be considered low value care. On the contrary, GP encounters for administrative, medication and referral tasks alone are relatively uncommon in general practice. Most encounters initiated by patients for these purposes lead to the GP providing additional health care, particularly for managing chronic conditions. Moving these tasks from general practice may not save money, but could reduce the continuity and quality of care for patients with chronic diseases. 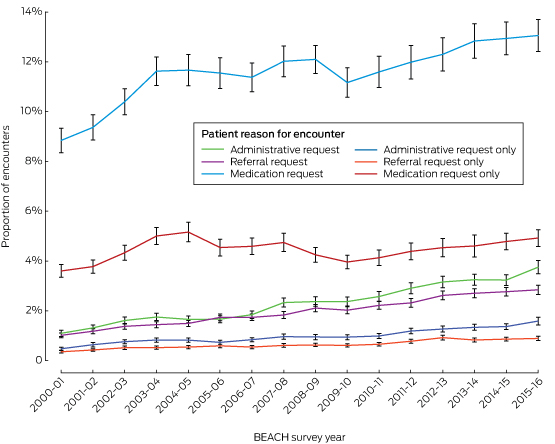