The Australian population is rapidly ageing, largely because of declining mortality rates. These changes have significant implications for prevention policy that are not fully appreciated by policy makers and the public.

We analysed epidemiological life table data (source: The Human Mortality Database, www.mortality.org) to simulate cohorts of 100 000 people experiencing the population mortality rates for 10-year intervals from 1960 to 2010. For example: for the simulated population of individuals aged 20 years in 1960, we applied 1960 mortality rates throughout their transition to 70 years of age. The probabilities of surviving to age 70 were modelled by subtracting the estimated numbers of deaths in each age band according to the age-specific death rates applicable during the 10-year interval. As we analysed publicly available aggregated data, formal ethics approval was not required.

Applying 1960 mortality rates, 54% of men and 72% of women survived to 70 years, compared with 82% and 89% using 2010 rates (Box 1). We examined the major causes of death, using data from the Australian Institute of Health and Welfare General Record of Incidence of Mortality database.1 Applying 1960 mortality rates, 29% of men and 16% of women died of cardiovascular disease (CVD) before age 70, compared with 5% of men and 2% of women with 2010 rates. That is, the estimated number of people who would have died of CVD had declined between 1960 and 2010 by 85% for men and 88% for women. Cancer mortality has also declined (by 21% in men, 22% in women), but the greater decline in CVD mortality means that cancer-related deaths have exceeded CVD deaths in men since the 2000s and in women since the 1990s (Box 2).

To consolidate these gains, the drivers of declines in the major causes of death in middle-aged Australians should be investigated. Continuous monitoring of disease trends is important for detecting undesirable changes early. The unexpected, sharp increase in mortality among middle-aged white, non-Hispanic men and women in the United States, for instance, may negate health gains over the past 50 years if not reversed.2 In Australia, the slowing of the decline in CVD-related adult mortality similarly requires investigation.3

Declining mortality among middle-aged Australians has implications for people aged 70 years or more. Disability, dementia and comorbidities are prevalent in this age group and substantially reduce quality of life. In 2012, 53% of the 3.3 million Australians aged 65 years or more had some form of disability, compared with 16% of those aged 25–64 years.4 While the disability rate among older Australians has been relatively steady since 1981, projections based on 1998 prevalence rates predict that the absolute number of older people with profound disabilities will double between 2006 and 2031.5

The high levels of morbidity among older Australians highlight the need for preventive measures that reduce disease burden and minimise the broader impacts of an ageing population. Clinical trials that investigate interventions for extending disability-free survival in the elderly are required. 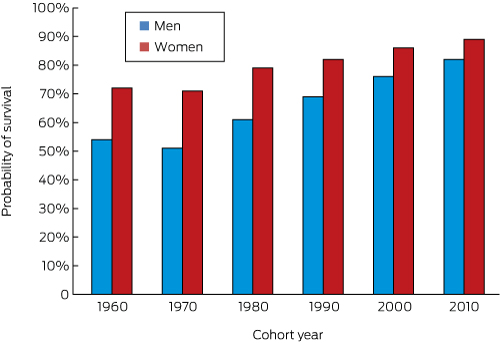 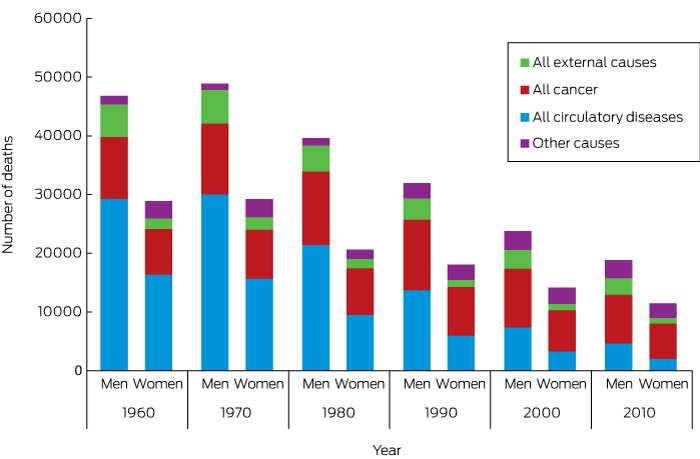