Design: Retrospective cohort study of patients hospitalised with a principal diagnosis of atrial fibrillation/flutter (AF) or venous thromboembolism (VTE) during 2014–2015.

Participants: 609 patients with an indication for anticoagulation therapy recorded in their hospital discharge summary for index admission.

Main outcome measures: Prescribing rates of anticoagulation therapies by indication for anticoagulation and distance of patient residence from their hospital. The primary safety outcome was re-hospitalisation with a major or clinically relevant non-major bleeding event; the primary lack-of-efficacy outcome was re-hospitalisation for a thromboembolic event.

The new About one-quarter of patients in rural Western Australia with a relevant indication were not prescribed anticoagulation therapy. Proximity of the patient to the treating hospital influenced the choice of therapy. Treating rural patients with NOACs was both convenient and safe.

Anticoagulation treatment reduces the incidence of ischaemic stroke in patients at risk of arterial thromboembolism and reduces mortality in patients with venous thromboembolism.1,2 Although effective, it also increases the propensity for bleeding and haemorrhagic complications in some patients.

Vitamin K antagonists such as warfarin have long been the mainstay of anticoagulation therapy. Their highly variable metabolism is influenced by food and drug interactions, genetic polymorphisms, age, and medical comorbidities.3 Individualised dose adjustment, guided by frequent laboratory testing of the international normalised ratio (INR) for prothrombin time, optimises the time in therapeutic range and minimises the risk of thromboembolic and haemorrhagic events.3 For warfarin therapy to be safe and effective, adequate access to health care services is therefore essential.

Twenty-nine per cent of Australians live in rural and remote areas where limited access to health care services is associated with higher mortality rates.4 Optimising warfarin therapy in this population can be challenging; while point-of-care testing may be helpful, it reduces neither the frequency of testing nor the frequency of visits to a general practitioner.5 Accordingly, remoteness in Australia is a major barrier to warfarin therapy.6

Non-vitamin K antagonist oral anticoagulants (NOACs) are an established therapeutic option for long term anticoagulation therapy, and are safer than warfarin in urban settings.7,8 Although frequent laboratory testing is not required, NOACs require satisfactory renal function and strict adherence (because of their shorter plasma half-lives), and there is also concern about their reversibility.9 Rural patients requiring long term anticoagulation therapy may benefit from the convenience of NOACs, particularly when warfarin therapy is logistically challenging.

We retrospectively identified patients with indications for anticoagulation therapy in four rural hospitals in WA. Albany, Geraldton and Bunbury are classified by the Australian Rural, Remote and Metropolitan classification system10 as Small Rural Centres, while Kalgoorlie is a Remote Centre; they are respectively 413 km, 417 km, 174 km and 593 km from Perth, the metropolitan capital of WA and itself one of the most isolated cities in the world. Each site acts as a regional centre for the corresponding WA Country Health Service region; together these regions include more than two-thirds of the WA rural population.

Medical coding services identified admissions of patients for an overnight stay with a principal diagnosis of atrial fibrillation/flutter (AF; International Classification of Diseases, revision 10 [ICD-10] codes I48.x) or venous thromboembolism (VTE; includes pulmonary embolism and deep vein thrombosis: ICD-10 codes I26.x and I82.x) between 1 January 2014 and 31 December 2015. Discharge summaries for all hospital admissions before and including the index admission were reviewed for demographic data, results of relevant investigations, and medical comorbidities. Anticoagulation therapies were identified as warfarin, NOACs (dabigatran, apixaban, rivaroxaban) or low molecular weight heparin (LMWH), as prescribed prior to and at discharge from the index admission. Patients were excluded if insufficient medical or medication history was available in their index discharge summary, or if significant discrepancies between medications prescribed and medical comorbidities were identified. HAS-BLED bleeding risk scores11 were calculated for all patients, as were CHA2DS2–VASc stroke risk scores12 for patients with AF. Scores were calculated according to access to relevant laboratory investigations and information available in index and previous discharge summaries. A falls risk was identified if a patient had previously been admitted to hospital for complications of a fall, or if a falls risk was recorded in the index discharge summary. Distance from hospital of admission was estimated from postcodes and shortest road distances between two sites; patients living in the same postcode as their index hospital were deemed to live locally. Patients with no fixed address or from interstate were classified as “out of region”.

A patient-specific statewide medical record number was allocated to each patient before or during their index admission. Any patient with a subsequent admission (to October 2016) was identified in a statewide electronic medical record database by their medical record number, and corresponding discharge summaries were inspected for reason for admission, changes in anticoagulation therapy, and the outcomes of interest (safety and lack-of-efficacy events).

A safety event was defined as a hospital admission in WA for either a major bleeding event or a clinically relevant non-major bleeding event according to the International Society of Thrombosis and Haemostasis classification criteria.13,14 For the purpose of this study, patients with a severe INR elevation (greater than 9) requiring in-hospital intervention were classified as having clinically relevant non-major bleeding events, and patients with significant unexplained anaemia requiring transfusion of two or more units of blood products were classified as having major bleeding events. Lack-of-efficacy events were defined as re-admission to a public hospital in WA with a principal or secondary diagnosis of a new transient ischaemic attack, ischaemic stroke, systemic arterial thromboembolism, or VTE, as diagnosed by the treating team at the time of admission.

Data were analysed in SPSS Statistics 21 (IBM). Baseline characteristics are reported as frequencies, means (with standard deviations [SDs]), or medians (with interquartile ranges [IQRs]). The statistical significance of differences between categorical variables was assessed in χ2 tests, and of continuous variables in Mann–Whitney U tests. Non-local patients were grouped into tertiles of distance to their index hospital.

This research was approved by the Western Australian Country Health Services, Human Research and Ethics Committee; a waiver of informed consent by patients was granted (reference, 2016/19).

In total, 731 admitted patients with an indication for anticoagulation therapy were identified; a discharge summary was unavailable for 75 patients (10%), and information for a further 47 (6.4%) was insufficient or inconsistent. Discharge summaries for 609 patients were appropriate for inclusion (Box 1). The characteristics of excluded patients were similar to those of the study cohort (data not shown): their mean age was 67.2 years (SD, 15.0 years), 67 patients (55%) were men, and 93 (76%) had an index admission for AF.

Remoteness as a factor in selection of anticoagulation therapy

Remoteness as a factor in the prescribing of anticoagulation therapy

Warfarin was prescribed more frequently than NOACs for local patients; for patients located more than 3 km from the treating hospital, NOACs were prescribed more frequently than warfarin, but the difference was not statistically significant. These results suggest that remoteness influences the choice of anticoagulation therapy. A study of 597 patients with AF in Missouri found that rural patients were significantly less likely to receive anticoagulation therapy than urban patients.19 In contrast, a Canadian study of 83 513 patients with AF found no difference between anticoagulation prescription rates for rural and urban patients.20 Although there are significant differences between rural Australians and Canadians in cardiovascular health and health care services,21 the Australian study of 241 rural and urban women with AF found no significant difference in prescription rates.16 Improving anticoagulation therapy rates for people with AF provides the greatest opportunity for reducing the incidence of ischaemic stroke in rural Australia.22

Warfarin was associated with higher rates of safety events than NOACs, and with similar rates of lack-of-efficacy events. This difference in the frequency of safety events was not reflected by a difference between the anticoagulation groups in HAS-BLED scores; there was, however, a significant difference in median CHA2DS2–VASc score, which is also a predictor of bleeding risk.23 The high rates of bleeding in patients receiving LMWH (Box 4) is difficult to explain, but may be connected with comorbidities not examined in our study. Increasing evidence for the safety of NOACs, coupled with the development of reversal agents, might increase their use, and consequently improve anticoagulation rates for rural patients with AF.

We found that warfarin was prescribed more frequently than NOACs for patients with VTE, suggesting a slower uptake of NOACs for this indication, perhaps because VTE is a more recent indication for NOAC therapy.

Limitations of our study

The retrospective design of our study is the major limitation. Medical coding services probably allow capture of all patients hospitalised because of AF or VTE in the regions we examined, but about 17% of patients were excluded because discharge summaries were unavailable, incomplete, or inconsistent. The ability to identify safety and lack-of-efficacy outcomes was limited to re-hospitalisations, and mortality data outside the hospital setting were not accessible. Most major bleeding events in rural WA result in hospital admission, and the higher rates of comorbidities among patients receiving warfarin mean that unidentified deaths may be more likely in this group. About one-third of rural WA was not represented in our data, perhaps limiting the generalisability of our findings.

Box 1 – Flowchart for the selection of patients for inclusion in our study, and their outcomes 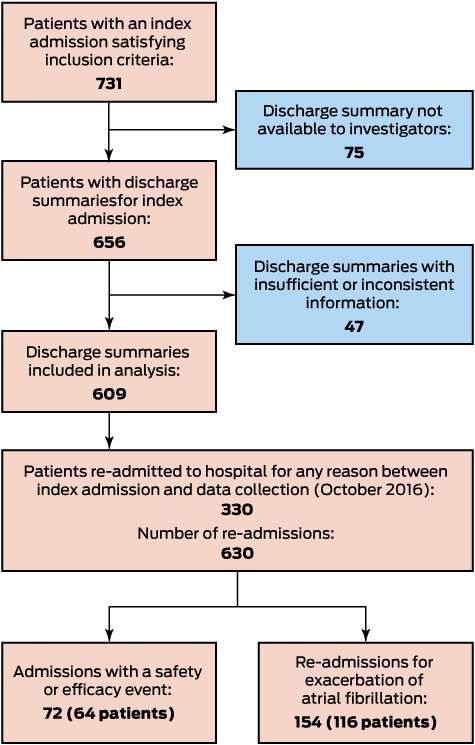 Box 3 – Choice of anticoagulation therapy, by location and indication for therapy 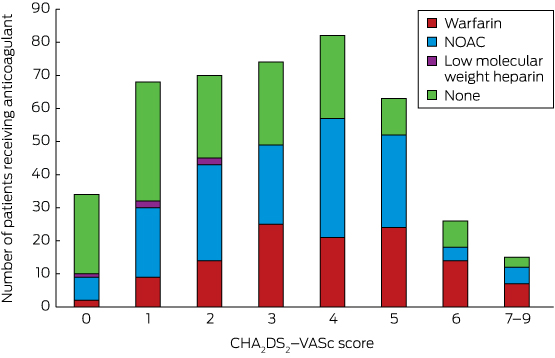