Melioidosis is an opportunistic tropical infection caused by the environmental bacterium Burkholderia pseudomallei. In northern Australia, most patients present with the disease during the wet season, when heavy rainfall increases the B. pseudomallei load in the top soil.1 An increase in the number of pneumonic presentations has been noted after cyclones and tropical storms;2 it has been proposed that heavy rainfall during severe weather events increases the environmental load of B. pseudomallei, while the associated high winds aerosolise the organism, increasing the risk of inhalation and, in susceptible hosts, disease.1 As the frequency of severe weather events is predicted to increase as a result of global climate change, some authors have warned of a potential rise in the burden of melioidosis.3

More than 280 000 people live in Far North Queensland (FNQ), an area where severe weather events are common and the incidence of melioidosis is among the highest in the world.4 The Queensland electronic laboratory database (AUSLAB) was established in January 1997. Between this time and December 2016, 197 microbiologically confirmed cases of melioidosis in FNQ were registered; they were categorised as being associated with a severe weather event if they occurred within 21 days and 150 kilometres of a tropical cyclone.2 During this 20-year study period, 37 tropical cyclones made landfall or passed within 150 kilometres of the FNQ coastline (online Appendix). There was no consistent association between these severe weather events and the incidence of melioidosis; ten cases of the disease (5% of all melioidosis cases) were associated with a tropical cyclone, of which only seven (4%) included pulmonary symptoms (Box). The significance of even these low numbers is confounded by the fact that the cyclone season coincides with the December–April wet season, when most melioidosis cases are reported (154 of the 197 cases [78%] between 1997 and 2016).

While the population density in some parts of FNQ is relatively low, this does not explain our findings. Most tropical cyclones passed through populated areas, and two of the largest ever recorded in Australia (Yasi and Larry) passed through the Cassowary Coast region, which has more than 30 000 residents. Further, no cases were associated with the three tropical cyclones that affected the Torres Strait region, where the incidence of melioidosis is particularly high.4

Even when a correlation between severe weather events and melioidosis has been reported, it has concerned only a minority of cases; in one Northern Territory report, only two of 13 severe weather events were associated with an increase in case numbers,2 suggesting that other environmental factors are more important for explaining variations in the incidence of melioidosis. The strong association with the wet season highlights the significance of rainfall, but other factors include the timing of the rainfall, the physico-chemical properties of the local soil, and fluctuations in the dewpoint and groundwater levels.1,3,5 Improving understanding of these more subtle factors may help clinicians predict the temporo-spatial epidemiology of the disease more reliably. 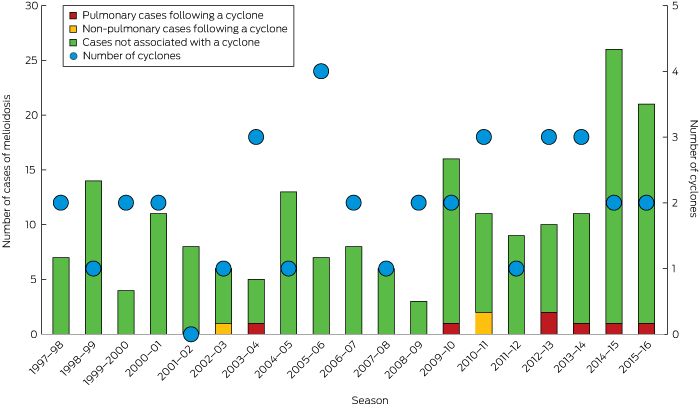