Design, setting and participants: Cross-sectional study of all patients with nodular and superficial spreading melanomas diagnosed between 1994 and 2015 at the Victorian Melanoma Service, Melbourne.

Conclusion: Melanomas are most likely to arise in the absence of a pre-existing naevus, particularly nodular melanomas. Public health campaigns should therefore emphasise the detection of suspicious de novo lesions, as well as of changing lesions.

The known Primary cutaneous melanomas may arise de novo or in association with a pre-existing naevus. Understanding the initial presentation of superficial spreading and nodular melanoma subtypes is vital for facilitating their early detection.

The new Most melanomas develop without a pre-existing naevus, particularly nodular melanomas, melanomas in patients over 70 years of age, and amelanotic/hypomelanotic melanomas.

The implications It is important for public health campaigns to emphasise the importance of detecting suspicious de novo lesions, as well as changing lesions.

Although only 10–15% of all invasive melanomas are nodular melanomas, this subtype is the predominant contributor to melanoma-related deaths.1 Nodular melanomas often elude early detection and account for a disproportionately high number of thick primary melanomas, partly because of their atypical clinical presentation (Box 1).1-3 Superficial spreading melanoma is the most common melanoma subtype, accounting for 55–65% of all melanomas (Box 2).1

Primary cutaneous melanomas may arise de novo or in association with a pre-existing naevus. Based on histological assessment, naevus-associated melanomas are estimated to represent 19–58% of all cutaneous melanomas.6-17 A clinical history of a longstanding precursor pigmented lesion is reported by patients for 40–45% of all biopsy-proven melanomas.11 However, a reported precursor pigmented lesion may be a slowly progressing early melanoma or a benign naevus, so that this information is not always reliable.16 Indeed, it has been reported that about one-third of patients without histological evidence of a naevus erroneously recall a pre-existing naevus.18

The Victorian Melanoma Service (VMS) is a statewide, multidisciplinary tertiary referral service based at the Alfred Hospital in Melbourne; it reviews about one-quarter of new melanoma cases in Victoria. The VMS database includes data on all patients treated at the service. Data for all patients with nodular melanomas and superficial spreading melanomas diagnosed at the VMS during 1994–2015 were included in this study.

An expert VMS dermatopathologist provided histopathological review of each melanoma. Tumour histological subtype was classified according to the World Health Organization classification system as superficial spreading melanoma, nodular melanoma, lentigo maligna melanoma, acral lentiginous melanoma, or desmoplastic melanoma. Our study assessed only the superficial spreading and nodular melanoma subtypes. The histopathological review recorded the presence or absence of an associated naevus for each melanoma. Data for patients were excluded from our study if information on the presence or absence of an associated naevus was not recorded.

The anatomic location of the primary tumour was categorised into the following groups: head and neck, trunk, and extremities. Patient-related variables were recorded by the treating doctor during the patients’ initial presentation.

Clinical and pathological characteristics extracted from the database included age, sex, Fitzpatrick skin type, personal history of melanoma, family history of melanoma, anatomic location of the primary tumour, Breslow thickness, histological subtype and amelanosis/hypomelanosis as assessed by the patient and family. Amelanosis/hypomelanosis describes melanomas with no or little pigment apparent to visual inspection.20

For statistical analysis, Breslow thickness was analysed as a continuous variable. Age was classified into ordinal groups (< 30, 30–49, 50–69, ≥ 70 years). Clinical and pathological characteristics of naevus-associated melanomas and de novo melanomas were compared in χ2 tests, and in univariable and multivariable logistic regression analyses; P < 0.05 was defined as statistically significant. Effect modification was assessed by calculating the strata-specific association between the proportion of naevus-associated melanoma and superficial spreading and nodular subtypes for multiple covariates (Breslow thickness, age, sex, amelanosis/hypomelanosis). All statistical analyses were performed in Stata 13 (StataCorp).

Institutional ethics approval to conduct a cross-sectional study based on data from the prospectively maintained database at the VMS was granted by the Alfred Hospital (project number, 38/16).

After adjusting for Breslow thickness, amelanosis/hypomelanosis, anatomic location, age, sex, personal and family history of melanoma, and Fitzpatrick skin type, the odds of being associated with a naevus were 3.05 times as high for superficial spreading melanomas as for nodular melanomas (OR, 3.05; 95% CI, 2.24–4.17, P < 0.001) (Box 4).

The strata-specific association between the proportion of naevus-associated melanomas and age group was the same for superficial spreading and nodular melanomas (P = 0.88), suggesting no effect modification by histologic subtype (Box 5, A). Further, there was no effect modification by sex (P = 0.27), amelanotic/hypomelanotic status (P = 0.79), and Breslow thickness (P = 0.96) (Box 5, B-D).

We also determined that the odds of an amelanotic/hypomelanotic melanoma being associated with a naevus were 32% lower than for pigmented melanomas. Amelanotic/hypomelanotic melanomas have been associated with the nodular subtype, head and neck location, and increased Breslow thickness.21-24 After controlling for potentially confounding covariates, we found an independent association between amelanotic/hypomelanotic melanoma and de novo development. This association has been reported by only one previous study: Thomas and colleagues21 compared the clinico-pathological features and survival of amelanotic and pigmented melanomas, and were the first to find a relationship between amelanosis and the absence of a pre-existing naevus (OR, 0.6; 95% CI, 0.4–1.0; P = 0.03).21 Their study assessed amelanosis histologically, while we assessed reports by patients and their families. Our study therefore contributes to the limited literature on an independent relationship between amelanosis/hypomelanosis and the absence of a pre-existing naevus.

An inverse relationship between tumour thickness and the presence of an associated pre-existing naevus has been reported in previous studies: Shitara and colleagues14 found that the median Breslow thickness of naevus-associated melanomas was significantly lower than for de novo melanomas, while Sagebiel10 reported that 65% of nodular and superficial spreading melanomas less than 1.69 mm thick, 46% of those 1.70–3.60 mm thick, and 32% of tumours more than 3.60 mm thick were histopathologically associated with benign naevus cells. Nonetheless, a recent prospective, single centre, observational study found that naevus-associated melanomas were more frequently associated with in situ tumours than invasive tumours; for invasive melanomas, however, being associated with a naevus was not related to tumour thickness.16

There is accumulating evidence for the aetiological heterogeneity of de novo naevus-associated melanomas.12,25 Whitehead and colleagues proposed a divergent pathway for cutaneous melanoma, premised on the propensity of the host to develop naevi.25,26 The first pathway describes naevus-prone individuals, in whom melanomas often arise in association with naevi, and require only modest amounts of sun exposure, after which tumour progression is predominantly driven by host factors. The second pathway describes individuals with a low propensity for developing naevi; these individuals are more likely to have de novo melanomas, and melanoma development requires a high degree of cumulative sun exposure.25,26

Consistent with this hypothesis, earlier observational studies found an association between naevus-associated melanoma and anatomic sites of intermittent sun exposure, such as the trunk.6,9,12,14-16,19 Accordingly, melanomas on sites associated with cumulative sun exposure, such as the head and neck, are less likely to be associated with a pre-existing naevus.6,9,12,14,25 This is consistent with our results, as the odds of a trunk melanoma being associated with a naevus were 2.27 times as high as for melanomas on the head and neck. Further, we found that naevus-associated melanomas were more common in younger patients, consistent with one previous study,9 although others have not found this association.12,16

Limitations of our study include likely referral bias, as the VMS is a statewide tertiary referral service to which patients with more advanced or aggressive disease are more likely to have been referred. A further limitation is that it may be difficult to histologically recognise the presence of a naevus in association with a melanoma, particularly dysplastic naevi and naevoid melanomas, despite the review of all melanomas by a dermatopathologist. The possibility of a fortuitous collision event — the coincidental coexistence of an adjacent naevus — must be acknowledged as a non-differential error. Nonetheless, the strengths of our study include the large sample size and the prospectively collected data in the VMS database, providing a clinically and histologically well characterised cohort of patients.

Consistent with earlier research, our study found that the vast majority of nodular melanomas arise in the absence of a pre-existing naevus. Melanoma development in association with a naevus was positively and independently associated with the superficial spreading melanoma subtype, location of the melanoma on the trunk, younger patient age, thinner primary tumours, and pigmented melanomas.

Most public education campaigns have focused the attention of people on observing suspicious changes in pre-existing naevi.7 While this message is undeniably important, it may be similarly imperative to emphasise the detection of suspicious de novo lesions, as melanomas of all subtypes are most likely to arise as new lesions. This is particularly the case for nodular melanoma, which contributes a disproportionately high fraction of thick primary tumours and melanoma-related deaths.1,3 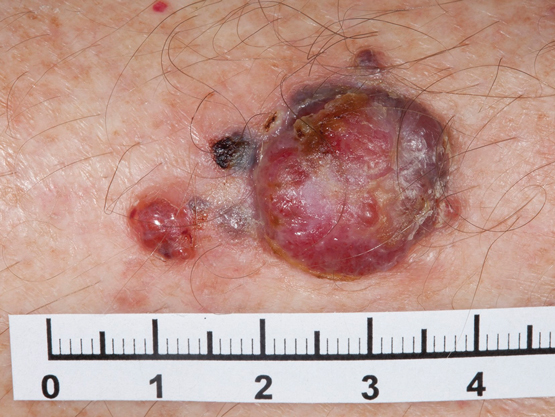 Box 2 – Superficial spreading melanoma. Breslow thickness, 1 mm, Clark level IV, non-ulcerated with one mitosis; arose within a pre-existing naevus on the left lower back of a 39-year-old man 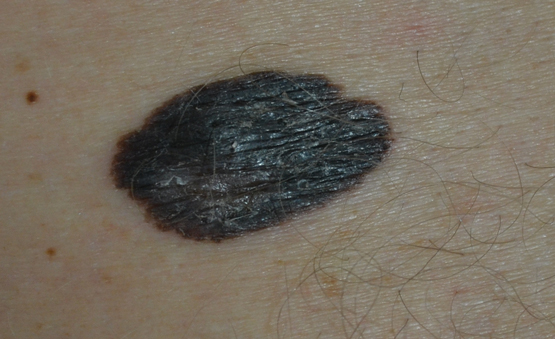 Box 5 – Proportion of superficial spreading and nodular melanomas associated with pre-existing naevi, according to A. age group; B. sex; C. amelanosis/hypomelanosis; and D. Breslow thickness 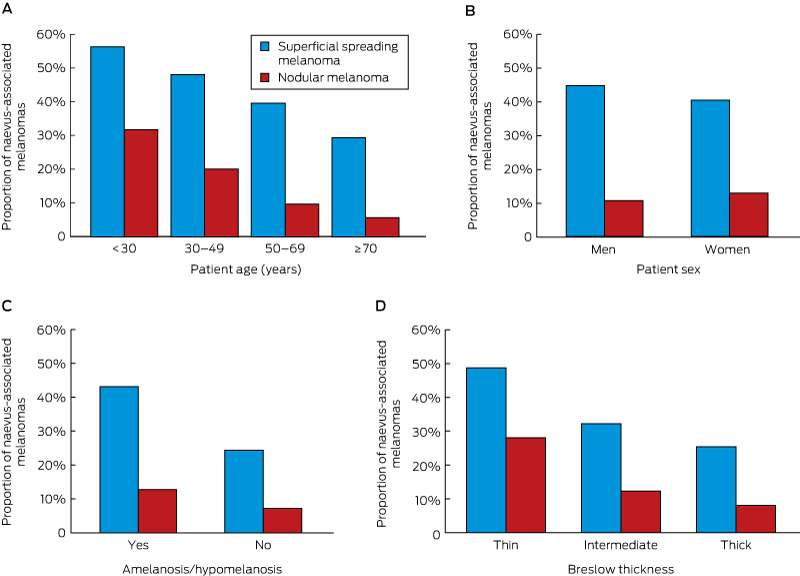