Objective: To evaluate hospital length of stay (LOS) and admission rates before and after implementation of an evidence-based, accelerated diagnostic protocol (ADP) for patients presenting to emergency departments (EDs) with chest pain.

Intervention: Implementation of the ADP by structured clinical re-design.

Conclusions: Implementing an evidence-based ADP for assessing patients with chest pain was feasible across a range of hospital types, and achieved a substantial release of health service capacity through reductions in hospital admissions and ED LOS.

The known Chest pain is among the most common primary problems with which patients present to emergency departments. Excluding acute coronary syndrome in most patients without missing cases requires a conservative approach, but places a considerable burden on service delivery.

The implications Implementing ADPs for assessing chest pain, such as those described in recently revised national clinical guidelines, should be actively encouraged. Similar strategies for managing other common and resource-intensive clinical problems merit evaluation.

Chest pain is among the most common primary problems with which patients present to emergency departments (EDs) in Australia.1 Causes of acute chest pain include pulmonary embolus and aortic dissection, but by far the most common life-threatening causes are acute coronary syndromes (ACS), which must accordingly be investigated in all patients presenting with chest pain. Minimising the risk of missing a serious condition while recognising that most patients do not have serious underlying causes for their symptoms constitutes a management dilemma for clinicians.2 Consensus guidelines have traditionally adopted a conservative approach, recommending clinical pathways that include comprehensive diagnostic assessment at the time of the initial presentation, and this often requires admitting the patient to hospital.3

The 2006 guidelines of the National Heart Foundation and the Cardiac Society of Australia and New Zealand (NHF/CSANZ) recommend stratifying patients presenting with possible ACS into low, intermediate and high risk categories.3 We have previously reported that adherence to these guidelines results in a small proportion of patients satisfying the criteria for low risk (1%), while the incidence of ACS in the intermediate risk group (62.6% of patients) is less than 2%.2 These guidelines recommend that intermediate risk patients undergo evaluation for 6–8 hours when sensitive troponin assays and other early objective testing for coronary artery disease are employed. The cost of identifying one ACS event in intermediate risk patients has recently been estimated to be $174 191, compared with $31 895 in patients with high risk features.4

Accelerated diagnostic protocols (ADPs) that can improve efficiency while maintaining patient safety have been described. The ADP based on the 2-hour Accelerated Diagnostic protocol to Assess Patients with chest pain symptoms using contemporary Troponins as the only biomarker (ADAPT) study allows identification of patients at very low short term risk (30 days) of a major adverse cardiac event who could be redefined as “low risk” after clinical risk stratification, serial troponin tests, and electrocardiography (ECG) 0 and 2 hours after presentation to the ED (Box 1).5 These patients can be discharged from the ED earlier, with further care undertaken in an ambulatory setting. The reported outcomes of implementing the ADAPT ADP at a single site indicated that the strategy translated well into clinical practice.6 Other studies have reported varying proportions of patients identified with the ADAPT ADP as being at low risk.7,8

The Accelerated Chest pain Risk Evaluation (ACRE) Project was a large scale initiative that aimed to translate the ADAPT ADP into clinical practice across Queensland public hospitals. Our aims were to assess the feasibility of applying the ADP in a broad range of acute hospital settings, to quantify changes in hospital length of stay (LOS) and admission rates, and to estimate its net cost.

All public hospitals with EDs treating adult patients and with 24-hour access to laboratory-based troponin testing were eligible for inclusion in the project. Access to pathology testing was required to ensure that clinical pathways were aligned with the core elements of the ADAPT ADP. Clinical pathways were applicable to patients with possible cardiac chest pain once other serious causes had been considered and excluded. The protocol was implemented incrementally across sites between October 2013 and September 2015, as previously described in detail.9

Data were collected from the Emergency Department Information System (EDIS; CSC Healthcare) and the Hospital Based Corporate Information System (HBCIS) by extracting reports from the Queensland Health Enterprise Reporting Service (QHERS), stratified by study site. Pre-implementation data were collected for the 12 months prior to implementation at each hospital, using a pre-existing QHERS report to obtain all ED presentations by adults for the relevant diagnosis-related groups (online Appendix, table 1). Diagnosis codes were inclusive, to maximise the probability of capturing patients with possible cardiac chest pain while excluding patients with clearly non-cardiac causes (eg, trauma).

Post-implementation EDIS data were collected between May 2014 and November 2015. Following implementation at each site, EDIS was reprogrammed to prompt clinicians to identify patients in relevant diagnosis-related groups with chest pain who were at low risk for ACS according to the ADP (using a binary code: 1 = yes, 2 = no). After implementation, a customised QHERS report containing the same parameters as the pre-implementation report was prepared, stratified by risk group (low risk v not low risk). EDIS data were linked with HBCIS inpatient records by the Queensland Health Research Linkage Group when relevant.

The primary outcome was the total hospital LOS for patients presenting to an ED with chest pain. Secondary outcome measures included hospital admission rate, ED LOS, and the proportion of patients identified by the ADP as being at low risk of an ACS within 30 days.

The Queensland Health Human Research Ethics Committee waived review of the study (reference, HREC/13/QGC/142) as the project was a quality activity and not recognised as research according to the definition in the National Statement on Ethical Conduct in Human Research of the National Health and Medical Research Council.

We report several important findings. Firstly, implementing an ADP to identify patients at very low 30-day risk of an ACS was associated with significant reductions in ED LOS, total hospital LOS, and hospital admissions. Secondly, the implementation of the ADP was feasible across a variety of hospital types, including large metropolitan centres and smaller regional hospitals; the proportion of patients defined as low risk was comparable with that in the original observational study in which the ADP was developed. Thirdly, a widespread, sustainable change in clinical practice was achieved within 4 years of the publication of the original evidence by applying a structured program of clinician-led knowledge transfer (clinical re-design). Finally, using contemporary estimates of the cost of evaluating patients with possible cardiac chest pain, we found that a substantial release of health service capacity was achieved within 12 months of implementing the program.

Timely and safe evaluation of patients with possible cardiac chest pain is an essential service in acute care hospitals. However, a large majority of patients presenting with chest pain are at low risk of an ACS, and earlier clinical guidelines have been inefficient in identifying these individuals. We found that an efficient ADP, such as the ADAPT ADP, can substantially improve the efficiency of health service delivery without compromising patient safety. The need to increase the value of care delivered by improving or maintaining outcomes relative to expenditure is widely recognised. Health service providers face a major challenge from increased demand in an environment of constrained funding. As the total cost for implementing the ADP in all 16 hospitals was about $1.6 million, the return on investment was better than 8:1 during the first year.

Successful knowledge transfer in health service provision is difficult. Non-adherence to clinical pathways is a common problem, and the full impact of novel strategies is often diminished when translated from the research setting to clinical care.10 Reassuringly, we found that the proportion of patients defined as being at low risk was similar to that in the pilot study; two randomised controlled trials employing the ADAPT ADP have also reported that 20–30% of patients were eligible for early discharge.8,11 Further, reductions in hospital admission rates and LOS were sustained for up to 12 months after implementing the program.

When introducing a simple innovation into a complex health care environment at several sites, each with its own barriers and enablers, some heterogeneity of response is expected. A detailed consideration of the causes of such heterogeneity is beyond the scope of this article, but has been discussed previously.9 The ADP aimed to facilitate reductions in LOS and admission rates; it achieved lower admission rates at all sites, and reduced LOS at all but one of 16 sites (Box 4).

Translation of the ADAPT ADP into practice was achieved more rapidly than is often the case with more traditional approaches to change. These rely on incorporating research evidence into consensus clinical guidelines that are not always supported by local or broader health policies and programs. This time lag in translating health research into practice has been estimated to average 17 years.12 The time between publishing the ADAPT study and completing and evaluating its implementation was 4 years. Our findings should encourage those considering evidence-based ADPs, such as those described in the recently revised national clinical guidelines for managing ACS.13

One limitation of our study was that tracking clinical outcomes for individual patients was beyond the ambit of our analysis. However, the clinical pathway at all sites complied with the ADP derived from the original ADAPT study, at the time of its publication the largest observational study of chest pain evaluation in Australia and New Zealand. The sensitivity and negative predictive value of its approach to risk stratification has been validated overseas.8,14 Further, the ADAPT principle (Box 1) has subsequently been endorsed in recent revisions of clinical practice guidelines for the management of ACS in Australia, New Zealand, and Europe.13,15 Secondly, we relied on administrative datasets for hospital admissions and LOS data, which may have introduced some error that might have been excluded by a study-specific research dataset. Our results are nevertheless likely to be representative, given the importance of measures of patient flow in EDs following the introduction of National Emergency Access Targets in 2011. Thirdly, the before-and-after design of our study, without control data, means that other changes in the health care system may have influenced our findings. Finally, we relied on local clinicians to identify patients who were at low risk of ACS according to the ADP, and central adjudication of this risk stratification was not undertaken. However, implementing the ADP at each site was supported by education and site-specific documentation. The similarity of the proportions of low risk patients in the ADAPT study (20%) and this study (22%) suggest that this process was robust.

Implementing an evidence-based ADP for evaluating patients with possible cardiac chest pain through a structured program of clinical re-design was associated with a substantial release of health service capacity. This approach to reform could be applied to other high volume clinical services in order to increase the value of health care delivery.

Box 1 – Criteria for classifying a patient as being at low risk of an acute coronary syndrome, according to the ADAPT accelerated diagnostic protocol

Box 4 – Primary and secondary outcomes of the implementation of the ADAPT accelerated diagnostic protocol, by hospital 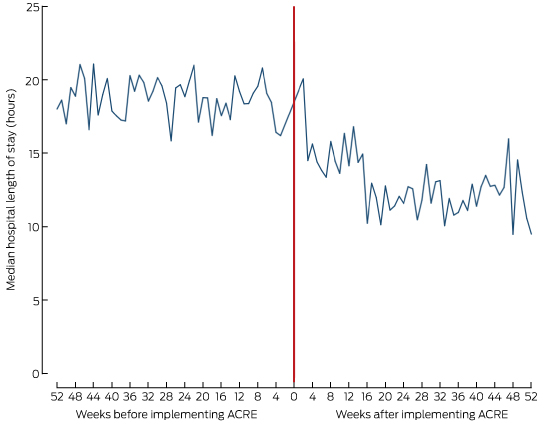 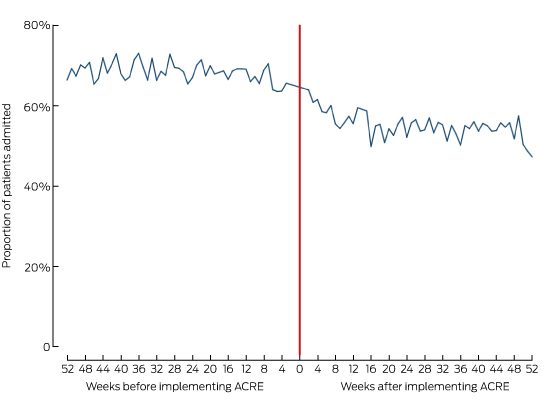