Design, setting and participants: Prospective follow-up of 56 652 women commencing ART in Australian and New Zealand during 2009–2012, and followed until 2014 or the first treatment-dependent live birth.

Main outcome measures: CLBRs and cycle-specific live birth rates were calculated for up to eight cycles, stratified by the age of the women (< 30, 30–34, 35–39, 40–44, > 44 years). Conservative CLBRs assumed that women discontinuing treatment had no chance of achieving a live birth if had they continued treatment; optimal CLBRs assumed that they would have had the same chance as women who continued treatment.

Conclusion: CLBRs based on complete cycles are meaningful estimates of ART success, reflecting contemporary clinical practice and encouraging safe practice. These estimates can be used when counselling patients and to inform public policy on ART treatment.

The known Almost 70 000 assisted reproductive technology (ART) cycles are performed each year in Australia and New Zealand. Success rates are generally reported per individual cycle attempt, rather than from the overall perspective of a course of ART treatment.

The new This is the first study to report cumulative success rates based on complete ovarian stimulation cycles for women undergoing ART in Australia and New Zealand, and also provides estimates that take into account women who discontinued treatment.

The implications These estimates can be used when counselling women about their likelihood of having a baby using ART treatment, and to inform public policy.

Infertility is experienced by about one in six couples, causing significant personal anguish to millions around the world.1,2 Assisted reproductive technologies (ARTs) such as in vitro fertilisation (IVF) have revolutionised the treatment of infertility. It is estimated that more than 1.8 million ART cycles were undertaken worldwide in 2010, and that more than 6 million children have been conceived using these technologies over the past three decades.3 The Australian and New Zealand Assisted Reproductive Database (ANZARD) recorded 33 750 women having 67 707 ART cycles during 2014, resulting in the births of 12 875 babies; this was one in 25 children born in Australia, and 1 in 12 children to women over 35.4

A fresh ART treatment cycle typically involves ovarian stimulation and the retrieval of several mature oocytes (eggs) for fertilisation. The resulting embryos are cultured in vitro for 2–6 days before one or, occasionally, two embryos are transferred to the woman’s uterus. Unused embryos are cryopreserved for potential transfer in subsequent frozen/thaw cycles.

The success rate of ARTs is generally reported as the number of clinical pregnancies or live births per single fresh or frozen/thaw cycle.4-6 However, cryopreservation has become increasingly central to clinical practice over the past decade, calling into question the relevance of this measure of success. The shift to frozen/thaw cycles has been largely driven by the move to single embryo transfers — to minimise the health risks associated with multiple gestation pregnancies — and by strategies that delay embryo transfer, to improve synchronicity between the endometrium and embryo and to accommodate pre-implantation genetic testing. Further, evidence that fetal wellbeing is not harmed by embryo cryopreservation, and higher ART success rates per embryo transfer (particularly with frozen/thaw embryos), have elevated the importance of the cryopreservation program.7-9 This shift in practice means that, when informing patients about the chances of ART success, a more meaningful measure would be based on “complete cycles”, encompassing the outcomes from all fresh and frozen/thaw embryo transfers following one ovarian stimulation10,11 (Box 1).

Our objective was to report the cumulative live birth rate (CLBRs) for all complete ART cycles a woman might undergo, with a minimum 2-year period follow-up from the commencement of her first cycle; that is, to determine the chance of a woman having her first live birth after repeated ART treatment cycles.

ANZARD, managed by the National Epidemiology and Perinatal Statistics Unit of the University of New South Wales, collects information on all ART treatment cycles undertaken in the 90 fertility clinics in Australia and New Zealand. All fertility clinics report ART treatment information to ANZARD as part of their licensing requirements, so that full registration of ART cycles is assumed. Records of all frozen/thaw transfers were linked to the associated episode of ovarian stimulation for each woman. This allowed each complete treatment cycle to be identified, and the reproductive outcome to be measured. Cycles were excluded for women who used donated oocytes or embryos, or surrogacy arrangements, and when the purpose of treatment was the long term storage of oocytes or embryos (eg, onco-fertility preservation).

The follow-up period was chosen to allow sufficient time to achieve at least one live birth and a sufficient number of complete cycles for reliable estimates of live birth rates. Live birth was defined as the birth of at least one infant of at least 20 weeks’ gestation or a minimum 400 g birth weight; ie, the birth of twins or triplets was counted as one live birth. CLBRs were reported according to age group at the commencement of treatment (under 30 years, 30–34 years, 35–39 years, 40–44 years, 45 years or older).

The optimal CLBR assumed that women who discontinued treatment would have had the same chance of a live birth with continued ART as those who did continue; it was estimated (with 95% CIs) by the Kaplan–Meier method.

Cycle-specific live birth rates were calculated as the number of live births resulting from a cycle divided by the number of women who commenced that cycle. Analyses were conducted in Stata 14 (StataCorp).

The characteristics of the 56 652 women who commenced ART treatment during 2009–2012 and of the 120 930 complete treatment cycles they underwent by 2014 are summarised in Box 2 and online Appendix 2. The median age of women commencing treatment was 35 years (interquartile range [IQR], 31–39 years), 30% presented with infertility caused by female factors, 37% with infertility caused by male or a combination of male and female factors; for 25% of women the cause of infertility was unexplained. Women underwent an average of 2.1 complete cycles, and 3.0 single fresh or frozen/thaw cycles. The median number of oocytes retrieved per fresh stimulated cycle was eight (IQR, 4–12), and 73% of embryo transfer procedures transferred a single embryo. Of the women who commenced treatment, 54.5% achieved at least one live birth; 25.5% of complete cycles resulted in a live birth. The live birth rate per embryo transfer cycle was 22.9% for fresh embryo transfers.

The discontinuation rates after each complete cycle for women who commenced treatment before 45 years of age were similar for all age groups (23–35% during the first six cycles). Discontinuation rates for women who commenced treatment when 45 years or older were much higher, ranging from 49.1% after the first cycle to 35.2% after the fifth cycle (Box 3 and online Appendix 3).

The sensitivity analysis found that when the CLBR was adjusted for the proportion of women likely to discontinue ART treatment because of doctor censoring, the CLBR after three complete cycles was 55.2% (95% CI, 56.5–53.8%), closer to the optimal (58.8%) than the conservative rate (49.9%). This finding was similar for all age groups (online Appendix 1).

This is the first report of CLBRs based on complete ART treatment cycles derived from population-based Australian and New Zealand fertility clinic data. The perspective of a complete cycle, which links all fresh and frozen/thaw embryo transfers to the associated ovarian stimulation, allows cycle-specific and CLBRs to be calculated. The cycle-specific rates inform women about their chances of their first live birth from one course of ovarian stimulation followed by all embryo transfers. The CLBR informs women about their chances of at least one live birth after a given number of repeated ovarian stimulation cycles. For example, for women commencing ART treatment when aged 30–34 years, the estimated chance of a live birth lies between 64.5% (95% CI, 63.8–65.2%) and 73.6% (95% CI, 72.8–74.4%) after three complete cycles, and the chance of a live birth during the third complete cycle is 28.0% (95% CI, 26.3–29.8%).

Although cycle-specific rates declined with successive cycles, conservative and optimal CLBRs increased for most age groups for up to seven or eight cycles. The exception was women who commenced ART treatment at 45 years of age or later (655 women), of whom only 12 had had a live birth after five complete cycles.

Two recent analyses of data from the Human Fertilisation and Embryology Authority (HFEA) national database (United Kingdom) have also calculated conservative and optimal complete cycle CLBRs.13,14 We cannot directly compare our results with those of these studies because the UK data were older, one study did not report age-specific rates,13 and the other applied different age groupings.14 However, our all-age conservative and optimal CLBRs were generally higher. For example, we calculated a CLBR of 32.7% for the first complete cycle, compared with 28.5–29.5% in the UK; after six complete cycles, the conservative CLBR was 53.9% in Australia and New Zealand, 43.9–46.8% in the UK. These differences may relate to differences in the patient populations, laboratory expertise, or clinical practice. However, as with other studies of ART CLBRs,13-16 and because the Kaplan–Meier method includes only the first event of interest, CLBRs and cycle-specific rates do not account for women who achieve more than one live birth as the result of ART treatment, and are therefore underestimates.

The conservative CLBR is pessimistic in that it assumes that women who discontinue treatment without a live birth have no future prospect of treatment success. Conversely, the optimal CLBR is probably overly optimistic, as it assumes that women who discontinued treatment had the same chance of a live birth with continued treatment as those who did continue. The range between the two provides a reasonable appraisal of the probability of achieving at least one live birth from repeated ART treatment. Our sensitivity analysis accounted for the likely proportion of women who discontinued because the prognosis was poor (doctor censoring), and consistently found that the prognosis-adjusted CLBRs were closer to the optimal than the conservative estimate (online Appendix 1).

A limitation of our study is that our estimates are based on population estimates and do not account for individual prognostic factors that affect a woman’s chance of ART success, including duration of infertility, body mass index, previous childbearing, and ovarian reserve.17 Whether ART treatment should be commenced or continued should ultimately be a decision for the fertility clinician and the patient, taking into account all medical and non-medical factors.

CLBR estimates do not report the probability of a multiple birth. However, given that ART multiple birth rates in Australia and New Zealand are among the lowest in the world (fewer than 5% of all ART births3,4), the safety of ART in the current funding environment in Australia and New Zealand is reassuring. Almost all ART treatment is eligible for partial re-imbursement by Medicare, without limitations on the number of cycles or the woman’s age. The cost of fresh stimulated ART cycles is estimated to be about $10 000, of which $6000–7000 is reimbursed by Medicare.18 Several studies have found that the out-of-pocket cost of ART treatment for patients influences the number of embryos transferred: higher out-of-pockets costs encourage multiple embryo transfers to maximise pregnancy rates with fewer funded cycles.19,20 Australia has one of the most supportive funding arrangements for ART, which partially explains its relatively high utilisation rate,21 as well as its low multiple birth rate. This not only makes Australia one of the safest countries in the world to receive ART treatment, but also reduces the costs arising from multiple gestation births.22 In New Zealand, access to two publicly funded ART cycles is based on meeting specific criteria, including restrictions according to age and body mass index, and only single embryo transfers are permitted,23 resulting in similarly low multiple birth rates, but also more limited access.4

CLBRs based on complete ART cycles are meaningful estimates of the success of ART treatment, reflecting contemporary clinical practice and encouraging safe embryo transfer practices. These estimates can be used when counselling prospective parents about the likelihood of treatment success, as well as for educating the public and informing policy on ART treatments. 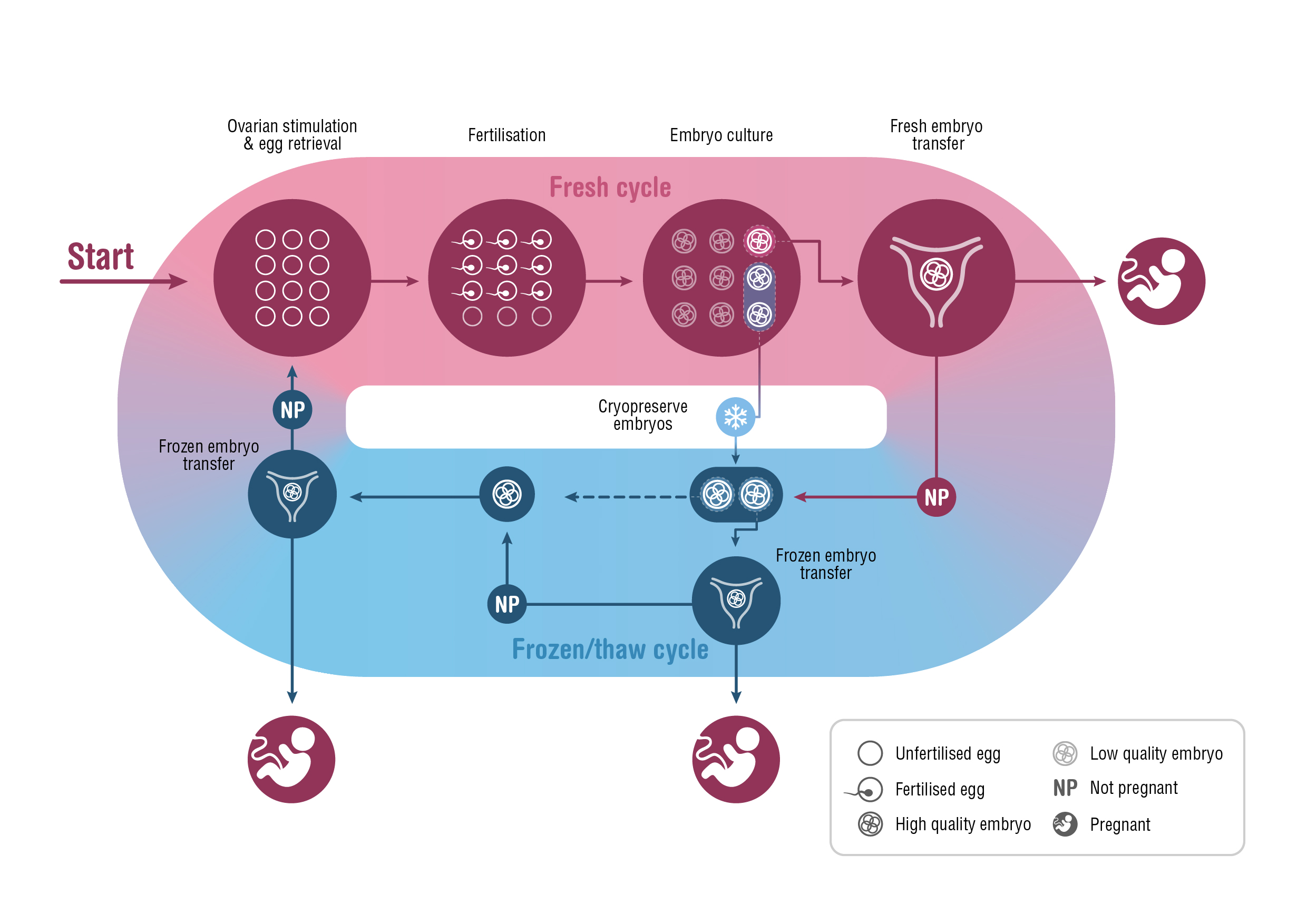