Objectives: To determine the relationship between glycaemic control trajectory and the long term risk of severe complications in people with type 1 diabetes mellitus, as well as the effects of paediatric and adult HbA1c levels.

The known Microvascular complications in people with type 1 diabetes mellitus are directly related to glycaemic control.

The implications Target-based treatment from the time of diagnosis of type 1 diabetes in childhood is required to reduce the risk of SDR during adulthood.

Whether microvascular complications develop in people with type 1 diabetes mellitus is critically dependent on their glycaemic control.1-3 In the large Diabetes Control and Complications Trial (DCCT) and the Epidemiology of Diabetes Complications (EDIC) trial, however, mean glycated haemoglobin A1c (HbA1c) levels could only be estimated from data acquired at trial entry; consequently, the effect of the cumulative glycaemic exposure of the 195 adolescents in these studies during their 1–5 years of diabetes could not be analysed. As a result, the importance and contribution of childhood glycaemic control could not be fully assessed, which may explain some of the differences between adolescent and adult outcomes at follow-up.4 Apart from these two large scale studies, few investigations have followed individuals with childhood-onset type 1 diabetes into adult life.5,6 One longitudinal study (15 participants) found that mean HbA1c levels at diagnosis in childhood were higher for those who developed retinopathy during the 20-year follow-up, and that differences in HbA1c levels between those with and without retinopathy gradually declined with time.7 However, no study has compared the effect of optimal and poor glycaemic control across life on the risk of later complications.

We undertook a retrospective cohort study of data collected from the time of diagnosis of type 1 diabetes in childhood until the time of our analysis (November 2013). Adults with a diagnosis of type 1 diabetes8 (diagnosed in childhood during 1975–2010) were included if they had attended at least one specialist adult diabetes clinic at the Royal Melbourne Hospital, and their care had been transferred from the paediatric diabetes clinic at the Royal Children’s Hospital (Melbourne) during 1992–2013. Individuals who had been lost to follow-up at the time of care transition from the paediatric diabetes clinic or who had died were therefore excluded. The choice of transition referral centre follows a discussion between the physician and young adult, and is not based on any biological or clinical criteria. Because of its proximity, the Royal Melbourne is the main adult referral centre for patients who transition from the Royal Children’s Hospital, receiving about 40% of its transitioning cohort.

We used a data linkage system, BioGrid Australia, that facilitates linkage of de-identified clinical data from member institutions. All individuals with type 1 diabetes common to both hospitals were identified. Data obtained from clinical department databases at each institution, including standardised clinical data for all routine outpatient clinic visits, were combined with mortality outcome data from the National Death Index (NDI), which has recorded all deaths in Australia since 1980. The process of sequential data linkage was performed with SAS 9.2 (SAS Institute).

The primary outcome of interest was a database record of diabetes-specific microvascular complications; in this study, only the most severe forms were considered. The date and cause of death were obtained from the NDI. Severe diabetic retinopathy (SDR) included one or more of maculopathy, proliferative retinopathy, and a need for photocoagulation surgery. Chronic kidney disease (CKD) was defined by a glomerular filtration rate of less than 60 mL/min/1.73 m2 (stage 3 CKD or worse),9 calculated from serial creatinine measurements using the Chronic Kidney Disease Epidemiology Collaboration (CKD-EPI) equation.10 Ulceration and amputation were recorded according to the clinical database files.

HbA1c levels were summarised as paediatric (mean of all pre-transition paediatric clinic measurements), adult (mean of all post-transition measurements as an adult), and life course values (mean HbA1c level from diagnosis to November 2013). The glycaemic control trajectory was defined across the life course, with 66 mmol/mol set as the upper cut-off value for good glycaemic control. This value was preferred to the standard paediatric target of 58 mmol/mol because it was anticipated that some of the cohort had commenced treatment before publication of the DCCT findings1,2 upon which the current HbA1c target values are based.8,11 The median HbA1c level in children aged 0–18 years with type 1 diabetes in Australia in 2009 was reported to be 66 mmol/mol;12 this was also the median HbA1c level for a cohort of children who had recently transitioned from care at the Royal Children’s Hospital.13

Each individual was assigned to one of four glycaemic control trajectory groups:

Differences between the trajectory groups in participant characteristics, HbA1c levels, and complications were examined by one-way ANOVA (continuous variables) or in χ2 tests (categorical variables). The standardised mortality ratio was calculated as the ratio of the number of observed deaths to the number of expected deaths in the general population, based on 2012 Australian Bureau of Statistics data for Victoria. SDR was the only complication we examined in a regression analysis, as the aetiology of the other outcome measures could not be precisely defined. The relative effect of paediatric and adult glycaemic control on the risk of developing SDR was assessed by generalised estimating equation (GEE) analysis, which could allow for unmeasured variables and confounders. Statistical analyses were performed in Stata 13.0 (StataCorp); P < 0.05 was deemed statistically significant.

By incorporating all recorded HbA1c data from diagnosis onwards, this study offers a unique insight into a cohort of adults with childhood-onset type 1 diabetes who were not managed in clinical trials. None of those who maintained a mean HbA1c level of 66 mmol/mol or less from the time of diagnosis (the stable low group) developed SDR. The mean paediatric, adult and overall HbA1c levels in this group were each 58 mmol/mol or less, supporting the adoption of this target in paediatric practice.11 Each additional year of diabetes conferred a significant increase in the risk of SDR, and our data indicate that both paediatric and adult mean HbA1c levels are modifiable factors that moderate this risk. This is important for paediatric care providers, as 64.6% of participants remained in the same HbA1c level category (low or high) during the paediatric and adult periods, indicating that glycaemic control generally neither markedly deteriorates nor improves after the transition to adult services. This challenges the widely held belief that glycaemic control in young adults with type 1 diabetes improves during their mid- to late 20s following deterioration during the adolescent years,14 a premise that may not apply to every patient.

The major limitations of this study are its retrospective design and the low numbers of severe complications reported. Detailed clinical information beyond that recorded in the clinical databases was not available; as the data were de-identified, this problem could not be overcome. Assessing the potential relevance of lifetime glycaemic control for the risk of complications, with the exception of retinopathy, is therefore difficult. Further, we lacked information about outcomes for those who were lost to follow-up immediately after the transition from paediatric care, for whom we consequently have no information about glycaemic control trajectory or complication rates. This could account for the discrepancy between the standardised mortality ratio we estimated and that based on a population-based dataset in Western Australia (1.7 for men, 10.1 for women).15 Although glycaemic control for most of the participants had been suboptimal throughout their lives, the SDR rate was low, but consistent with the recent report that 3.7% of young people (14–30 years old) with type 1 diabetes in Norway required laser therapy within 20 years of the onset of diabetes.16

A number of factors contribute to a higher risk of diabetes-related complications, including genetic susceptibility and cardiovascular risk factors (such as smoking, higher body mass index, greater waist:hip ratio, hyperlipidaemia, hypertension). Data on these factors were not available, and the omission of these known confounders from our analyses is a major limitation of this study. The duration of follow-up varied between individuals, and a shorter period of follow-up during adulthood may have led to misclassification of trajectory category. Cohort studies that assess individuals from diagnosis to death could overcome this limitation, but would be possible only for population-based registries or in large, multicentre cohort studies.

As the study period was broad, we also assessed the effect of era of diagnosis on SDR outcome (data not shown). While SDR was more common among those diagnosed prior to the publication of the DCCT findings (1994), the effect was not independent of the collinear higher glycaemic control that commenced before contemporary target-based practice.

Our report describes the risk of diabetes-specific microvascular complications in a cohort of Australian adults who were diagnosed with type 1 diabetes during childhood. It is the first to assess clinical outcomes according to glycaemic control trajectory between childhood and adulthood, and is the largest to use all available metabolic data from the diagnosis of type 1 diabetes onwards, with a longer duration of follow-up than reported elsewhere. In the absence of an Australian population-based registry of individuals with type 1 diabetes, this data linkage study facilitated assessment of the effects of glycaemic control during the paediatric and adult periods. From this novel perspective, we found that, after adjusting for duration of diabetes (a non-modifiable factor), HbA1c level throughout the course of life was independently associated with the risk of retinopathy in adulthood; the predictive effects of paediatric and adult HbA1c levels were equivalent. However, as severe retinopathy commenced during the third decade of life in our cohort and most people had similar glycaemic control levels in childhood and adulthood, the contribution of metabolic memory (the concept that hyperglycaemia appears to have a chronic rather than an acute effect on the development of complications)4 from the paediatric period was integral to this risk.

Box 1 – Participant characteristics, HbA1c levels, and complication rates for all participants and for each glycaemic control trajectory group 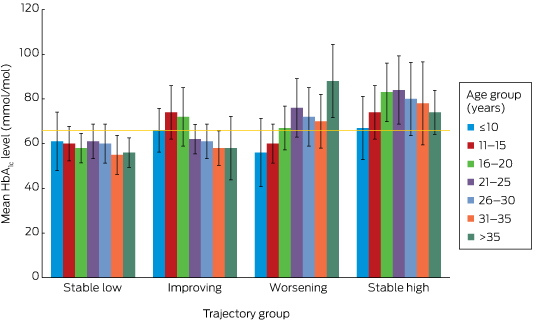 We acknowledge the assistance of the staff of BioGrid Australia during planning, ethics applications and data extraction for this article, particularly Leon Heffer and Knight Wang.