Time to increase our focus on immunising adults

In recent years, there has been increasing attention on parents who actively refuse to vaccinate their children. Successive federal governments have increased the amount of family assistance payments at stake for those who do not vaccinate, and removed most incentives for providers to vaccinate.1 In 2016, the federal government removed vaccine objection as an alternative to vaccination for eligibility to receive family assistance payments. Two states — Victoria and Queensland — introduced legislation to allow the exclusion of unvaccinated children from child care, with no exemption for objectors. The abolition of the conscientious objection process has been championed in sections of the media2 and by some advocacy groups. Responses to people expressing dissenting views have sometimes been vitriolic.3

These measures, however, do not address the vast numbers of undervaccinated adults. We estimate that there are about 4.1 million undervaccinated Australians each year; that is, people who are eligible to receive free vaccine(s) under the National Immunisation Program (NIP) but do not receive them (Box). Of these, the children of parents with ideological objections to vaccination are a small subset; the vast majority are adults.

Many vaccines are officially recommended for Australians in a range of circumstances, at full cost to the individual, at a subsidised cost or free of charge.4 The latter category are vaccines that have been added to the NIP Schedule for eligible groups, following expert advice that they should be provided free of charge, based on an analysis of the disease burden, vaccine efficacy, safety and cost. In this article, we specifically discuss NIP vaccines and eligible groups.

There are about 1.8 million children aged over 6 years in Australia.5 Vaccination coverage rates in children are high by international standards — over 90% of children have received all recommended vaccines by the age milestones of 12, 24 and 60 months.6 It has been estimated that about 150 000 (8.1%) were recorded as having not received one or more recommended doses in 2013. About 37 000 of these, or 2.0% of children, were registered as having a conscientious objection.6 Of the remaining 6.1%, most were incompletely vaccinated or unvaccinated owing to difficulties accessing immunisation services, false contraindications, or having parents who had concerns but did not report an objection.6 A proportion were in fact vaccinated but the information had not been reported or transmitted to the Australian Childhood Immunisation Register (ACIR).

In contrast to high rates of early childhood immunisation coverage, three-dose completion of the HPV vaccine course in adolescent girls is currently 73%.7 Coverage for other adolescent vaccines is not collected at the national level but is estimated to have been lower for some other NIP vaccines for this age group.8 Based on HPV coverage for adolescent girls and applying that to a 2-year cohort of both sexes, we estimate that there are currently about 150 000 undervaccinated adolescents aged 13–14 years. The likely major contributors are difficulty in obtaining informed consent, school attendance rates and limited facility for catch-up vaccination.8

The vaccines currently on the NIP for adults are influenza vaccine (since 1999), 23-valent pneumococcal polysaccharide vaccine (23vPPV; since 2005) and herpes zoster (since November 2016). Influenza is estimated to be responsible for 300 000 general practitioner consultations, 18 000 hospital admissions9 and 3000 deaths4 each year in Australia. Annually, there are about 360 cases of invasive pneumococcal disease due to serotypes included in the 23vPPV in people aged ≥ 65 years, including at least 45 deaths.10 Low vaccination coverage is a substantial contributor to these continuing disease burdens. Improved performance in program delivery to this group is required, especially given the addition of zoster vaccine at 70 years of age from November 2016, and perhaps 13-valent pneumococcal conjugate vaccine at 65 years and pertussis vaccine for pregnant women, following recent Pharmaceutical Benefits Advisory Committee recommendations.11 There are about 3.5 million Australians aged ≥ 65 years,5 all of whom are eligible for pneumococcal and annual influenza vaccines. Yet only 51% of this population had received both vaccines when last measured, reflecting a large gap between funded infant and adult vaccine programs.12 The most important factor influencing vaccination uptake in older patients is a recommendation from a health professional.12 Perceptions about the severity of influenza disease, the effectiveness of the currently available vaccines, and the severity of side effects are also associated with the likelihood of being vaccinated.12 Further, there is good evidence on a wide variety of effective measures to improve coverage rates in the older population, including reminders for patients and providers, educational interventions and incentives.13

For programs targeted at high risk individuals, mostly adults, the situation is even less satisfactory. The dilemma of these programs is that, while they target individuals at highest risk and with the most to gain from immunisation, they routinely achieve lower coverage than programs with simpler age-based recommendations.14 This is likely to be due to the greater difficulty in identifying and reaching eligible people, and missed opportunities to vaccinate during other health care encounters. Since 2010, influenza vaccine has been available under the NIP for all people aged ≥ 6 months who are medically at risk of severe complications following influenza infection. A quarter of the adult population (aged ≥ 18 years) falls into this category.12 The coverage achieved by this program since its introduction is not known — we have used an estimate of 36% from 2009,12 or about 1.8 million unvaccinated adults each year. The World Health Organization recommends pregnant women as the highest priority to receive influenza vaccine. In a 2015 study from Western Australia, 41% of pregnant women had received the vaccine,15 and unpublished data indicate this to be rising.16 For Aboriginal and Torres Strait Islander people aged 15–49 years with medical risk factors, the most recent pneumococcal coverage estimate is an unacceptable 13%.14 Concerted efforts — over and above those required for age-based programs — are required to achieve good coverage in these programs. In addition to the measures mentioned above, population-based data and the ability to follow up unvaccinated eligible individuals are required but are more difficult to implement than for age-based programs. Improving access through nurse immunisers, flexible clinic hours,17 performance measures18 and active individual case management19 have all been successful in hard-to-reach and high risk populations.

The reasons for the neglect of adult immunisation are multifactorial and are not limited to Australia. In the United States, where vaccination coverage in adults is also suboptimal, an estimated 70 000 adults die from vaccine-preventable diseases each year.20 Lack of provider confidence in adult vaccines, value judgements on prevention in older people and lack of an adult vaccination register may all contribute to this gap.21 The ACIR supports the improvement of childhood vaccination coverage in a range of critical ways, including the documentation of immunisation for parents and providers, administering immunisation incentives for parents and providers, timely and accurate coverage estimates for providers and program managers, capacity to implement reminder systems, and performance indicators for program managers. In contrast for adults, the most recent coverage data are from 2009,12 and none of the other supporting mechanisms listed above are available. The 2015 federal Budget announcement that the ACIR would be expanded across the lifespan is a welcome development but is not in itself sufficient. Capturing the relevant data and providing all this functionality for adolescents, older Australians and risk-based programs will be a greater challenge than establishing the ACIR. Adult vaccination includes a wider range of immunisation providers and subpopulations of vaccines, such as those with medical risk factors. It will require substantial support, resourcing and ongoing consultation.

Achieving high vaccination coverage in adults is challenging, given their greater mobility and diversity of settings. However, this is likely to be more successful in preventing disease than policies that sanction vaccine-hesitant parents. There is a need for governments, the media, providers and individuals to direct more attention towards the large numbers of adults who are unnecessarily susceptible to vaccine-preventable disease each year. Immunisation is just as important for adolescents, older people, those with medical risk factors, pregnant women and other high risk groups as it is for children.

Box – Number of Australians eligible for vaccination under the National Immunisation Program, by age group and vaccination status, each year5,7,12,14 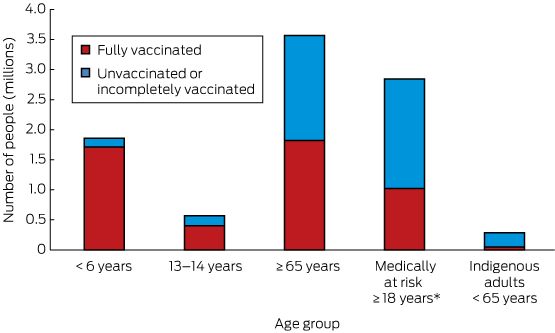 * Medically at-risk children aged 6 months to 17 years are also funded but are not included in these numbers.

Raina MacIntyre has participated in advisory boards for Pfizer, Merck and GSK, and has received in-kind support for investigator-driven research from Pfizer and CSL.