Objectives: To examine geographic and demographic trends in objection to vaccination in Australia.

Main outcome measures: Immunisation status according to whether an objection had been registered, and remoteness and socio-economic status of area of residence. Registration of children with Medicare after 12 months of age was used as a proxy indicator of being overseas-born.

Results: The proportion of children affected by a registered vaccination objection increased from 1.1% in 2002 to 2.0% in 2013. Children with a registered objection were clustered in regional areas. The proportion was lower among children living in areas in the lowest decile of socio-economic status (1.1%) than in areas in the highest socio-economic decile (1.9%). The proportion not affected by a recorded objection but who were only partly vaccinated for vaccines due at 2, 4 and 6 months of age was higher among those in the lowest decile (5.0% v 3.4%), suggesting problems of access to health services, missed opportunities, and logistic difficulties. The proportion of proxy overseas-born for whom neither vaccinations nor an objection were recorded was 14 times higher than for other children (17.1% v 1.2%). These children, who are likely to be vaccinated although this is not recorded on the ACIR, resided predominantly in major cities.

Considerable media and public attention has been focused in recent years on the refusal by some parents to vaccinate their children as recommended by health authorities. Vaccination coverage has often been purported to be declining nationally as a result, particularly in more affluent inner-city suburbs (for example, 1).

Until the end of 2015, the Australian Childhood Immunisation Register (ACIR) recorded registered objection to vaccination based on personal, philosophical or religious beliefs. Registration of objection required a vaccination provider to complete a conscientious objection form; this was necessary only when the parents wished to remain eligible for family assistance payments from the federal government or, in some states, to be able to enrol their child in childcare. It is therefore likely that ACIR data have not captured all instances of parental objection to vaccination.

We examined the following four subgroups of children, defined according to ACIR data:

We examined trends over time for cohorts aged 12 months to less than 7 years for the period 2002–2013. Children under 12 months old were excluded to allow time for parents to have registered an objection to vaccination. We analysed the 2013 data further, mainly for children born 1 January 2007 – 31 December 2012.

If a child was registered with Medicare later than 365 days after birth, we assumed that they had been born overseas.

We compared children living in postcodes in the bottom and top 10% of all postcodes with regard to economic resources, according to the Socio-Economic Indexes for Areas: Index of Economic Resources.6 For small area analyses, we used Australian Bureau of Statistics (ABS) Statistical Area 3 (SA3) areas.7 Maps were created using MapInfo version 12.0 (Pitney Bowes) and ABS census boundary information. The ABS Postal Area to SA3 Concordance 20118 was used to match ACIR postcodes to SA3.9 If a postcode was matched to more than one SA3, the SA3 with the greatest proportion of the population of that postcode was used.

Due to the extremely large number of children included in this study, statistical comparisons were unnecessary.

Ethics approval was not required for this study, as de-identified population-based data were used only for routine public health surveillance.

The proportion of children with an objection to vaccination recorded on the ACIR varied substantially at the small area level. Most areas with high levels of recorded objection were in regional zones, with marked clustering in northern New South Wales and south-east Queensland (Box 3).

Registered objection to vaccination in Australia, as a percentage of the total population aged from 12 months to less than 7 years, increased by less than one percentage point between 2002 and 2013. During this period, the percentage of children with no recorded objection but incompletely vaccinated (either no vaccinations or only some scheduled vaccinations recorded) decreased, while vaccination coverage remained relatively high and stable.4,9 Contrary to frequent claims in the media, this suggests that overall levels of objection (registered and unregistered) have not changed, and increases in registered objection may have been driven by increased awareness that registration preserved eligibility for family assistance payments, which rose in value during this period.10

Among the 5.8% of children in 2013 who were incompletely vaccinated but with no recorded objection, potential explanatory factors include unregistered objection, reporting and recording errors, and problems of access, opportunity and logistics.

Another important subgroup of incompletely vaccinated children includes the 3.4% of children for whom there was no recorded objection, but who were only partially vaccinated with respect to vaccines due at 2, 4 and 6 months of age. This group included a substantially higher proportion of children living in the bottom 10% of socio-economic status postcodes, suggesting delayed vaccination caused by problems related to disadvantage, logistic difficulties, access to health services, and missed opportunities in primary, secondary and tertiary health care. Incomplete vaccination has previously been associated with socio-economic factors in Australian and overseas studies.16,17

This figure includes fully vaccinated children with a registered objection. Our findings indicate that, at earlier vaccination milestones, the objection was typically registered after scheduled vaccinations were given. At the 60 months’ milestone, however, appropriate vaccinations had usually been given after the objection had been registered, which may reflect a change of mind by the parent(s) and subsequent (ie, delayed) vaccination.

The distribution of recorded vaccination objection shows marked geographical clustering, posing a risk of local disease outbreaks.18-21 Teasing out the various issues contributing to incomplete vaccination will be particularly important now that data on registered objection is no longer collected: from 1 January 2016, philosophical and religious beliefs are no longer legally valid reasons for exemption from vaccination requirements for receiving family assistance payments.22 Our findings provide a baseline against which to track trends in objection, although limitations include our use of ACIR data without directly interviewing parents, and the limited nature of recent information on the completeness and accuracy of ACIR data. The most recent national survey of parents of incompletely vaccinated children estimated in 2001 that 2.5–3.0% of the annual birth cohort were affected by parents who had registered an objection or had significant concerns about vaccination.2,23 Our estimate (3.3%) was only slightly higher, suggesting that there has been little change in the overall impact of vaccination objection since 2001. A national survey, focusing on incompletely vaccinated children, equipped to evaluate data quality, and using personal interviews to assess parental attitudes, would allow verification of our findings.

In light of our conclusions, primary care clinicians should pay close attention to ensuring that the vaccination history of overseas-born children is correctly recorded in the ACIR. Clinicians should also be on the alert for appropriate catch-up opportunities for partially vaccinated children, as in most cases they are probably not up to date for reasons other than parental objection. 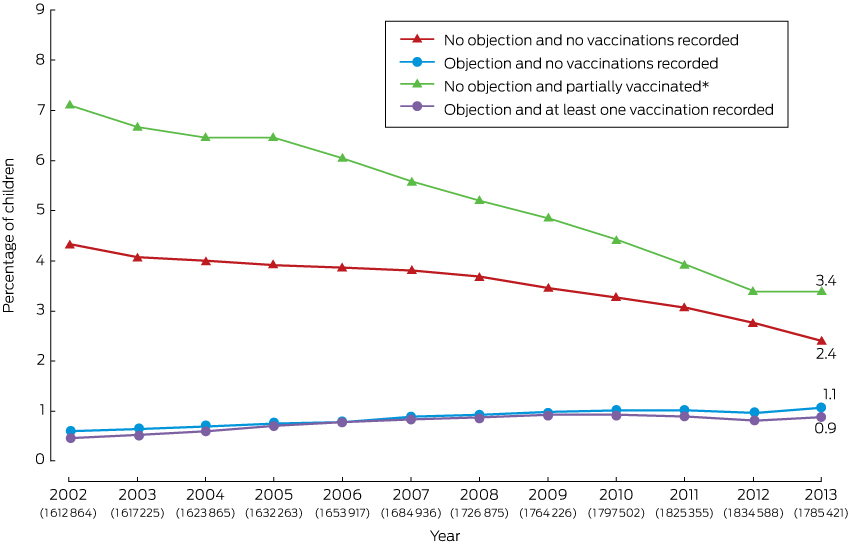 * For vaccines due at 2, 4 and 6 months of age. The number of children in each annual cohort is given below the respective year number. 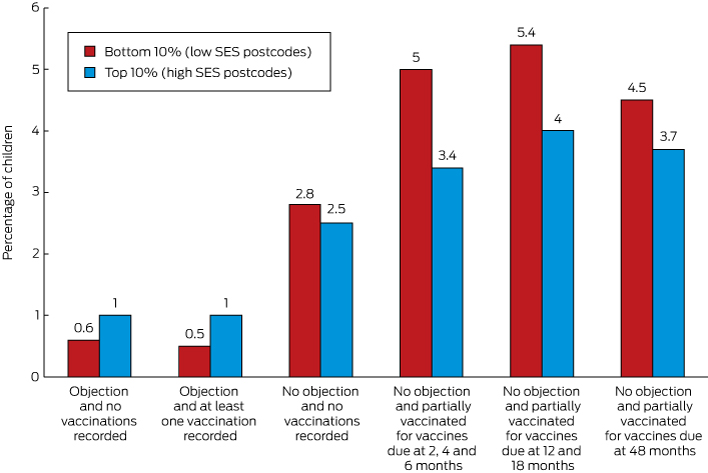 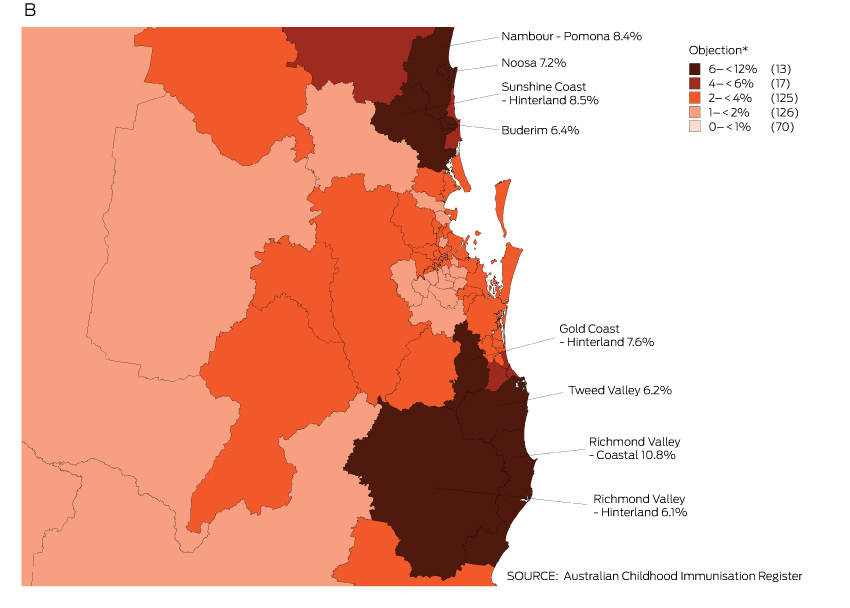 Box 4 – Estimates of the proportions of children aged from 12 months to less than 7 years affected by registered and unregistered vaccination objection, Australia, 2013

The National Centre for Immunisation Research and Surveillance is supported by the Australian Government Department of Health, the NSW Ministry of Health and the Children’s Hospital at Westmead. The opinions expressed in this paper are those of the authors, and do not necessarily represent the views of these agencies.

We are all employed full- or part-time by the National Centre for Immunisation Research and Surveillance, which receives most of its funding from the Australian Government Department of Health.