Objectives: To describe the incidence and mortality of invasive infections in Indigenous children admitted to paediatric and general intensive care units (ICUs) in Australia.

Participants: All children under 16 years of age admitted to an ICU in Australia, 1 January 2002 – 31 December 2013. Indigenous children were defined as those identified as Aboriginal and/or Torres Strait Islander in a mandatory admissions dataset.

The known Sepsis is one the main causes of death in children worldwide. Childhood mortality in high income countries is higher in indigenous populations, but the contribution of infections to excess mortality in this vulnerable group is unknown.

The new Intensive care unit admission rates for invasive infections were higher for Aboriginal and/or Torres Strait Islander children than for non-Indigenous Australians, particularly for staphylococcal infections, and the population-based ICU mortality attributable to infections was more than twice that of non-Indigenous children.

The implications Our results highlight an important area of health care inequity in a high income country that must be redressed.

Of the estimated 6.3 million deaths of children under 5 years of age worldwide in 2013, 51.8% were attributable to infectious diseases.1,2 While most infection-related deaths occur in low income countries, infectious diseases also continue to cause significant mortality in high income countries.3 We have recently reported that the incidence of severe infections in children that require admission to an intensive care unit (ICU) was increasing in Australia and New Zealand,4 consistent with recent reports from the United States.5 About 25% of deaths in paediatric ICUs are related to severe infections, and case fatality rates are as high as 17%.4

In countries such as Canada, the US, Australia and New Zealand, indigenous status is a risk factor for childhood mortality because of a complex interplay of factors, including remoteness and access to health care, socio-economic and educational resources.6 In Australia, children of Aboriginal and Torres Strait Islander background are more than twice as likely to die during childhood than non-Indigenous Australian children.6 Indigenous Australian children have a higher risk of contracting infectious diseases, including otitis media and pyoderma, as well as invasive infections, including bloodstream infections, pneumonia and bronchiectasis;7-11 invasive infection rates are comparable with those in low and middle income countries. While the population-based incidence of sepsis, ICU admission, and mortality are reported to be significantly higher for Indigenous Australian adults,9 analogous data for Indigenous children have not been published.

We performed a multi-centre, retrospective national cohort study of Australian and New Zealand Paediatric Intensive Care (ANZPIC) Registry data (http://www.anzics.com.au/pages/CORE/ANZPICR-registry.aspx). The ANZPIC Registry is a state-funded mandatory registry that prospectively records data for paediatric admissions to all Australian and New Zealand paediatric and general ICUs, collected by trained ICU data collectors, with central data validation and auditing. Details of our study methods and use of registry data have been published previously.4 Only data from Australian units were included in the analysis reported in this article.

Infection groups were defined according to the diagnostic coding for each patient in the ANZPIC Registry, including the principal diagnosis, underlying diagnosis, and any of the associated diagnoses. “Invasive infection” included sepsis, septic shock, toxic shock, meningitis, pneumonia/pneumonitis, peritonitis, necrotising fasciitis, septic arthritis, osteomyelitis, endocarditis, tracheitis, and epiglottitis. We performed subgroup analyses of data for children with coded diagnoses of sepsis, septic shock or toxic shock. Sepsis and septic shock were defined according to the consensus definition.12

The primary outcome was ICU mortality. Severity of illness at ICU admission was assessed with the Paediatric Index of Mortality 2 (PIM2).13 Secondary outcomes included duration of invasive and non-invasive ventilation, length of stay in the ICU, length of stay in hospital, hospital mortality, and blood culture results.

Analyses included every ICU admission. We compared differences between the first 6 years of the study (2002–2007: initiation of the “Surviving Sepsis Campaign”, after publication of the sepsis consensus definition), and the second 6 years of the study (2008–2013: period following publication of the second edition of the “Surviving Sepsis” guidelines16). In addition, trends during the 12-year study period were assessed by linear regression. We used the PIM2 score to adjust for the severity of illness of children. For risk prediction models, we used a saturated logistic regression model, clustering on site. For multivariable models, all significant predictors from the univariable analyses were included. We used a backward stepwise elimination procedure to eliminate non-significant predictors (P > 0.05). The severity of illness for Indigenous and non-Indigenous children admitted to an ICU were compared in a Wilcoxon rank-sum test.

We used the 2006 Australian Bureau of Statistics Remoteness Structure to classify each patient’s residential postcode as a major city, inner regional, outer regional, remote, or very remote Australia. Where postcodes contained different remoteness classifications, we assigned the classification applicable to the greater land area of the postcode.17

All analyses were conducted in Stata 12.1 (StataCorp). P < 0.05 was deemed statistically significant.

The development of the research proposal was conducted in consultation with local Aboriginal Liaison officers and medical experts working with Aboriginal and Torres Strait Islander children in ICUs, and in accordance with national guidelines for ensuring cultural sensitivity. Approval was obtained from the Mater Health Services Aboriginal liaison officer. Ethics approval, including for waiver of informed consent, was obtained from the Mater Health Services Human Research Ethics Committee, Brisbane (reference, MHS HREC EC00332; HREC/13/MHS/153/AM02). The Registry was approved by the Human Research and Ethics Committee of the Royal Children’s Hospital (Brisbane).

The most frequent invasive infectious conditions in Indigenous patients were pneumonia (394 of 726, 54.3%), meningitis (89 of 726, 12.3%), peritonitis (22 of 726, 3.0%), and osteomyelitis (16 of 726, 2.2%). The main pathogens identified in critically ill Indigenous children admitted with sepsis/septic shock were Staphylococcus aureus (22% of patients) and Neisseria meningitidis (11%; Box 3). A bacterial aetiology was identified in 54% of patients and a viral co-infection was reported in 11% of cases. No pathogen was recorded for 38% of episodes of sepsis/septic shock. The proportion of patients diagnosed with N. meningitidis infection decreased from 16% in 2002–2007 to 8% of those with sepsis/septic shock during 2008–2013 (P = 0.044), but no substantial changes in the frequency of infection with other pathogens were observed.

Univariate logistic regression models (Box 4, Appendix 3) identified that a comorbidity (in particular, immunosuppression or chronic neurological disease) and severity markers (including need for mechanical ventilation, extracorporeal membrane oxygenation, and renal replacement) were significant predictors of mortality of Indigenous children with invasive infections. In multivariate analyses, immunosuppression, chronic neurological disease, and need for mechanical ventilation or renal replacement remained significantly associated with mortality; the strongest effect size was associated with the need for mechanical ventilation. Similar findings were made for children with sepsis, except that congenital heart disease, rather than immunosuppression or neurological disease, was a significant predictor of mortality in both uni- and multivariate analyses.

Our findings parallel reports of disproportionate infectious disease burdens in other indigenous populations.6,8,18-20 High rates of infectious diseases, including ear and respiratory tract infections, have consistently been reported for Canadian First Nations, Inuit and Métis peoples, Native Americans, Alaskan and Hawaiian Natives, and New Zealand Pacific and Māori peoples. Children in these populations experience poorer overall health outcomes than non-indigenous children, including higher infant and childhood mortality.6 Risk factors that contribute to the high incidence of infectious diseases among indigenous children include lower socio-economic status, overcrowding, poor access to sanitation, clean water and health facilities, and differences in hygiene and health-seeking behaviour.21 These key social and economic factors, recognised as major causes of poor health in low income countries, must also receive attention in high income countries if we are to improve national and global health outcomes for disadvantaged groups.22

Remoteness and difficulties in access to health care may also significantly increase the incidence of invasive infections in indigenous children that require treatment in ICUs, as delays in initiating appropriate treatment allow disease progression.23 This is consistent with our finding that Indigenous Australian children admitted to ICUs with invasive infections had higher median illness severity scores (PIM2) than non-Indigenous children during 2008–2013. This finding also suggests that a lower admission threshold for Indigenous children is unlikely to have contributed to their higher admission rate in our study. Further investigations in which outcomes are stratified according to the length of time to medical care may clarify the impact of remoteness on outcomes for children with infectious diseases.

The incidence of pneumococcal, group A streptococcal, and meningococcal disease in Indigenous Australian children has been reported to be 2–10 times that for non-Indigenous children residing in the same geographical area, despite 7-valent pneumococcal and meningococcal C vaccinations.20,24,25 We measured a significant decrease in meningococcal sepsis among Indigenous children that coincided with the introduction of the conjugate meningococcal vaccine. While expanding targeted vaccination may lead to further reductions in bacterial sepsis rates, vaccine-based interventions are unlikely to be available soon for S. aureus, identified in 40% of Indigenous patients from whom bacteria were isolated in our study. In the overall Australian and New Zealand paediatric sepsis ICU study,4 only 10% of sepsis cases were attributable to S. aureus, comparable with other cohorts.26 Prospective studies that assess the continuing impact of vaccinations on severe infection rates among Indigenous children in Australia are needed to further define this important area of public health.

Very high rates of invasive staphylococcal infection have been reported in adult and paediatric Indigenous populations in Australia.11 Excess rates of S. aureus infection have also been documented among Māori, Pacific Islanders and Samoans in New Zealand, Canadian Aboriginals, Alaskan Natives, Pacific Islanders in Hawaii, and Native Americans. Miles and colleagues27 found that 81% of patients admitted to paediatric ICUs in New Zealand for invasive S. aureus infections were Pacific Island and Māori children, although these ethnic groups comprise only 22% of the population. It is possible that genetic susceptibility may contribute to differences in biological susceptibility to sepsis,21 but further research is needed to clarify this question.

A number of limitations of our study need to be considered. It was based on a prospective paediatric ICU registry that does not capture infectious disease outcomes for newborns in neonatal nurseries or for children who die before they can be admitted to an ICU. The ANZPIC Registry captures 92–94% of paediatric patients admitted to ICUs in Australia, and the number of general ICUs contributing data to the registry increased during the study period. Admissions to general ICUs represented 17.1% of non-elective admissions recorded by this registry during 2008–2013, and 9.4% of admissions during 2002–2007. We therefore cannot exclude the possibility that we underestimated the true population-based incidence of severe infections.

Our primary outcome measure was ICU mortality. We did not detect major changes over time in mortality for Indigenous children admitted to ICUs with severe infections, but our study was not powered for subgroup mortality analyses. It is noteworthy that using mortality as an endpoint does not capture the impact of ICU admission on quality of life and health after discharge; clinically significant short and long term effects in former paediatric ICU patients have been documented.27,28 Finally, Indigenous children in Australia live in diverse environments, ranging from cities to remote Indigenous communities. Our study did not stratify outcomes according to these potentially important differences, nor did we have access to data on socio-economic status. 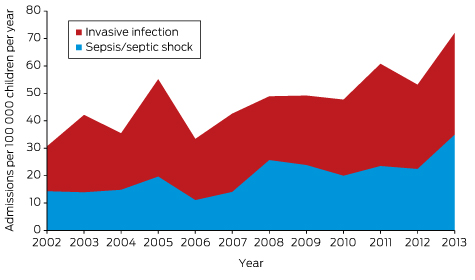 A. All invasive infectionsB. Children admitted with sepsis or septic shock