Cupping: the risk of burns

The practice of cupping has been employed for 3000 years, and is described in the writings of Hippocrates, Celsus and Aretaeus.1 A cup is heated with the aid of an accelerant, and then placed on or near the region being treated, inducing local negative pressure (of up to –1 atmosphere2) and stimulating focal hyperaemia. While cupping is employed to treat headaches, the common cold, indigestion,2 fibromyalgia, hypertension, neuralgia, menstrual disorders, and even cardiopulmonary disorders,3 the effect on the patient may be influenced more by psychological factors than physiological processes.2 Cupping has been recently popularised by high performance athletes,4 including the American Olympic Games swimmer, Michael Phelps.5

Cupping can, however, potentially have adverse outcomes; in particular, burn injuries. We recently treated a 34-year-old man who sustained burns during a cupping procedure for treatment of his cold. A container of methylated spirits had spilled onto the patient’s right upper limb and right flank during the procedure and caught fire. This caused 5% total body surface area (TBSA) burns, all of which were superficial partial dermal thickness burns (Box 1).

This presentation prompted us to review the data for the 18 703 patients enrolled in the Burns Registry of Australia and New Zealand (BRANZ) over a 7-year period (2009–2016). Twenty patients (0.11%) had sustained cupping-associated burn injuries (Box 2). Their mean age was 48.2 years (standard deviation [SD], 22.2 years); 11 (55%) were men. Eight patients identified as being Vietnamese, five as Australian, four as Greek, and one as Turkish.

Most cupping burns occurred at home (16 of 20 patients); all but two were flame burns. An accelerant was employed in at least 19 cases (17, methylated spirits; 2, hot oil). All injuries were accidental; there was one report of clothing catching fire. The indication for cupping was unstated in 16 cases; two patients underwent cupping for a cold, one for rheumatoid arthritic pain, and one for abdominal pain. The areas burned included the trunk (15 patients), breast (seven), hand (six), upper limb (five), lower limb (four), gluteal region (two) and face (two). The mean TBSA affected was 7.9% (SD, 4.5%). Seventeen patients underwent debridement under anaesthesia, and eight required a skin graft. The mean length of stay in hospital was 10.9 days (SD, 15.0 days).

Cupping is a traditional practice with limited empirical evidence for its efficacy. One study found a possible benefit in reducing musculoskeletal pain,6 and another, investigating reproductive problems in women, found that cupping reduced natural killer lymphocyte toxicity (without an overall change in immune status).7 A systematic review, however, concluded that Level 1 evidence of efficacy was very limited.8 The physiological benefit of cupping is therefore dubious.

Box 1 – Cupping marks on the upper back of the patient, and burn injury to the right upper limb and flank 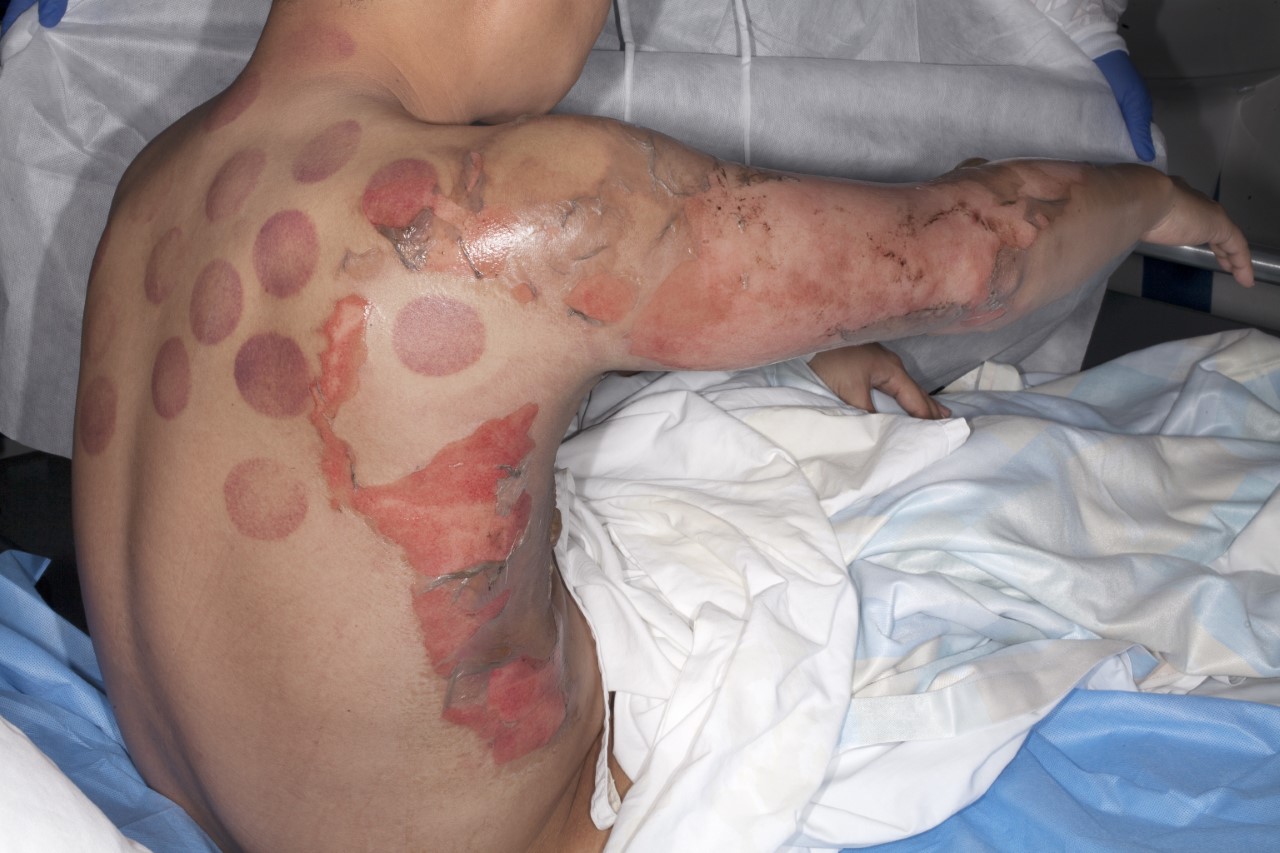 Box 2 – Characteristics of cupping-related burns, as recorded in the Burns Registry of Australia and New Zealand