The sugar content of soft drinks in Australia, Europe and the United States

Despite recommendations by the World Health Organization and the National Health and Medical Research Council to limit the drinking of sugar-sweetened beverages (SSBs), Australians are particularly high consumers of such products.1 In the report of the Australian Health Survey, 39% of males and 29% of females over 2 years of age had consumed SSBs on the day prior to the interview in 2011–2012,1 and these drinks were the largest sources of sugar in the Australian diet.2

The concentrations of sugars in five samples each of soft drinks marketed under the trade names Fanta, Sprite, Coca-Cola and Pepsi in the three regions Australia, Europe and the US (that is, 60 samples in total) were analysed by an independent, certified laboratory (National Measurement Institute, Australia) with high performance liquid chromatography. European samples of Fanta, Sprite, and Coca-Cola manufactured by the Coca-Cola Hellenic Bottling Company (HBC) Italia were representative of the corresponding soft drinks available in 28 European countries; samples of Pepsi manufactured by PepsiCo Beverages Italia were representative of the beverage available in 18 European countries. Each soft drink sample was derived from a different production batch; none contained intense sweeteners, such as aspartame or stevia. Total fructose and glucose concentrations (calculated final monosaccharide concentrations), allowing for contributions from sucrose, were calculated for each drink. Concentrations in each drink brand were compared in one-way analyses of variance (ANOVA) and, where appropriate, individual means were compared in post hoc least significant difference tests.

The potential health implications of regional differences in soft drink sugar content have not previously been examined, despite the differing metabolic effects of glucose and fructose.4 While the potential adverse effects of fructose overconsumption, particularly lipid accumulation, have been widely reported,4,5 those of Australian soft drinks containing high glucose concentrations have not been investigated.

Our short report should motivate specific examination of the health effects of Australian soft drink formulations.

Box – Mean concentrations of total glucose (A) and total fructose (B) in popular soft drinks in Australia, Europe and the United States 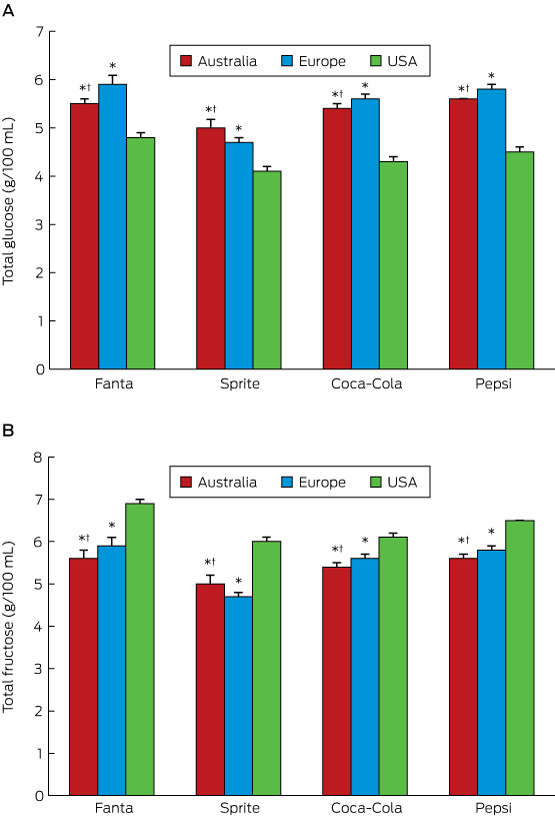 Five samples of each soft drink from each region were analysed. * P < 0.05 v US concentration; † P < 0.05 v European concentration. The full data for the concentrations of glucose, fructose, and sucrose, and of total glucose and total fructose in each drink is included in the online Appendix.

This work was funded by a National Health and Medical Research Council Program grant and the Victorian Government Operational Infrastructure Support scheme.