What’s in your hot dog? A histological comparative analysis

The contents of hot dogs (also known as street meat, tube steaks, frankfurters, wieners, etc) have been a source of speculation in popular culture. However, a search of published literature did not identify any studies analysing the histological composition of these products. The oral mucosa from the vermillion border and anuses of large mammalian domesticated animals has been postulated. We sought to not only determine the varieties of tissues that make up hot dogs, but also to do a comparative analysis of various brands of hot dogs to study the amount of skeletal muscle (which most people consider to represent meat) within each type.

Specimens were procured both from vendors in a public location (“street meat”) and from a commercial supermarket. The street meat specifically came from a vendor located at a major sporting event, and the store-bought one came from a large regional chain supermarket located in the author’s city of employment. Both a low-cost, no-name brand and an all-beef variety were purchased for examination. And in accordance with Canadian law, two French language specimens from Quebec were also included — again, both low-cost and all-beef varieties.

A single specimen from each package was selected, and at least five separate segments were submitted to be fixed in formalin overnight and then sectioned and stained with haematoxylin and eosin for light microscopic analysis by both authors. In addition, one section from each specimen was stained with immunohistochemical markers to analyse for specific tissue types, including desmin (a general muscle marker), smooth muscle actin and myosin (for smooth muscle) and S100 (for neural tissue).

Sections from all specimens showed similar histological composition. Somewhat surprisingly, the majority of the cross-sections of hot dogs consisted of fat globules. There was a wide but consistent range of tissues present, including but not limited to: bone, cartilage, blood vessels, skeletal muscle and, perhaps most disturbingly, fragments of vegetable matter (Box 1 and Box 2). The authors will not speculate on the source of this material. However, no squamous mucosa was identified. Immunohistochemical studies demonstrate the presence of neural tissue as well as poorly preserved tissue that stains for smooth muscle markers, presumably representing organ tissue of some type. The amount of desmin positive, smooth muscle negative tissue was depressingly minimal (Box 3). Qualitatively, the no-name brand demonstrated more skeletal muscle tissue, with the all-beef brand having the next most muscle tissue and the street meat specimen having the least.

Where do we begin? The results of this study were surprising to these authors. Although the absence of identifiable squamous mucosa definitively refutes the oral and anal mucosa hypothesis, the truth, if possible, seems much worse. The surprising lack of skeletal muscle may have been depressingly expected; however, the wide variety of tissues present and the extensive amount of fat making up the majority of the specimen were not. And as stated before, the origin of the recognisable vegetable matter does not bear thinking about, but one result of this study is that these authors may never eat hot dogs again.

In the course of our research, we determined that hot dogs are also consumed in Australia, often in the form of being battered and deep fried and served on a stick (depending on regional variations, they are alternately called a “dagwood dog”, “pluto pup” or “dippy dog”, all of which are apparently real). We can only postulate that the histological findings would be similar. However, we also discovered that a sausage called a “saveloy” is popular Down Under, and in the early 20th century they were stated to be made of pig brains.1 Although it is now claimed that they are made of young pork, the authors would gladly accept a fully funded research trip to Australia to investigate further. 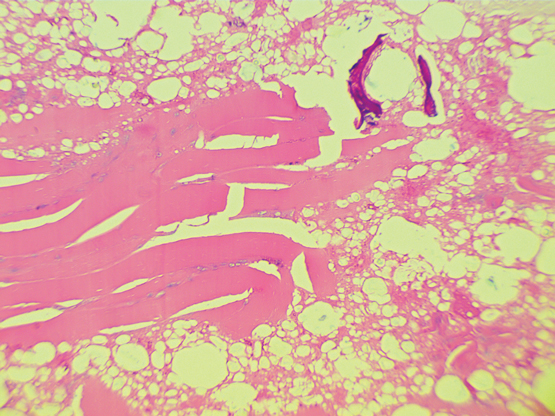 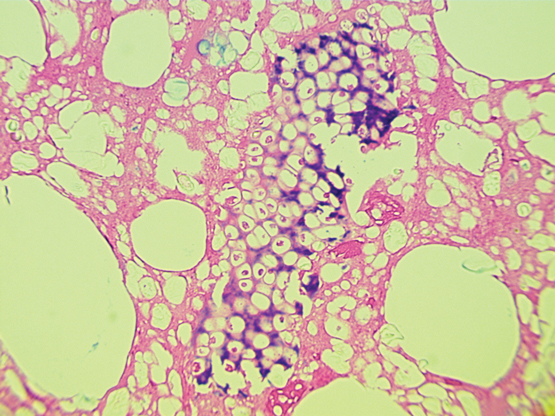 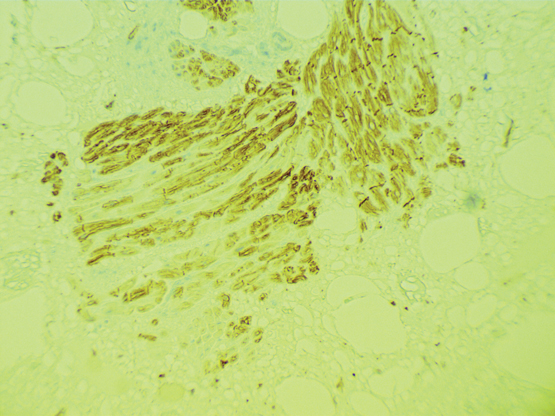 We thank Anurag Chopra for capturing the images and the staff in the laboratory for humouring our bizarre requests to do this study.

No competing interests are disclosed for this article, but we would declare that the hot dog industry will not find this amusing.

Figure 2 appears to be a fragment of cartilage rather than vegetable matter to my eyes. The authors may need to reconsider, retract or submit a more convincing photomicrograph of vegetable matter in a hot dog.
I am a histopathologist by specialty.

Dear Dr. Matsika,
Thank you for your interest in our article. Dr. Radigan and I are both fellows of the Royal College of Physicians and Surgeons of Canada, in general pathology and anatomical pathology, respectively. As well, we are both fervent omnivores. We feel, as do our colleagues in this department, that the tissue in the image is in fact, vegetable matter. The rigid cell walls, central vacuole, and minimal intervening stroma is consistent with plant fibres.