Dengue fever in travellers: are we missing warning signs of severe dengue in a non-endemic setting?

Worldwide, there are an estimated 50–100 million cases of dengue virus infection each year. Far North Queensland has experienced dengue epidemics, with deaths reported in outbreaks in 2004 and 2008–2009.1

A 38-year-old man presented one day after returning from Colombo, Sri Lanka. He was a Sri Lankan-born Australian resident with no significant past medical history. He was admitted 10 days after the onset of a biphasic febrile illness: fever, chills, and generalised myalgia for 4 days, resolution of symptoms, then recurrence of symptoms on Day 7. On the day of admission, he developed diarrhoea and bloodstained vomiting. Dengue non-structural protein 1 (NS1) antigen was detected, and results of tests for dengue immunoglobulin (Ig) M and dengue IgG antibody were positive, suggesting secondary dengue virus infection. Persisting high fever, worsening thrombocytopenia (platelet count, < 50 × 109/L; reference interval, 150–400 × 109/L) and bloodstained vomitus led to a diagnosis of dengue fever (DF) with warning signs. The 2009 World Health Organization (WHO) guidelines for the management of dengue2 were followed (Box), with close monitoring of fluid status and haematocrit (HCT). On Day 4 of admission, the fever resolved, heralding the critical phase of DF. Haemoconcentration was noted, with HCT rising to 0.51 (> 20% above the baseline). Within 2 days of defervescence, a new pruritic rash was noted on the arms and legs that was characteristic of the convalescent phase of DF. There was slow resolution of the HCT, and intravenous fluid infusions were ceased. The patient was discharged 7 days after admission.

The revised 2009 WHO guidelines are based on validation studies from DF-endemic countries,3 and classify cases into DF, DF with warning signs and severe DF.2 In travellers, warning signs may also predict progression to severe dengue.4,5

Our patient’s case of DF with warning signs prompted a retrospective study of DF admissions at our institution. From 2012 to 2014, we identified 35 confirmed cases (median age of patients, 31 years). All cases were in returned travellers from dengue-endemic countries. Assessment for dengue severity was not well documented. No cases met the definition for severe DF and there were no deaths. Over 50% had warning signs for severe DF, including minor bleeding, abdominal pain and persistent vomiting. Warning signs were recognised in less than 30% of cases, and less than 10% of cases were managed according to WHO guidelines with strict fluid balance and HCT monitoring.

In conclusion, many returned travellers admitted with DF have warning signs, which predict the development of severe conditions with life-threatening endpoints, such as severe organ dysfunction and refractory shock. Hospitals in non-endemic areas should develop protocols for diagnosing and managing DF based on the WHO guidelines. Further research into the utility of warning signs in travellers with DF for predicting severe disease is needed. 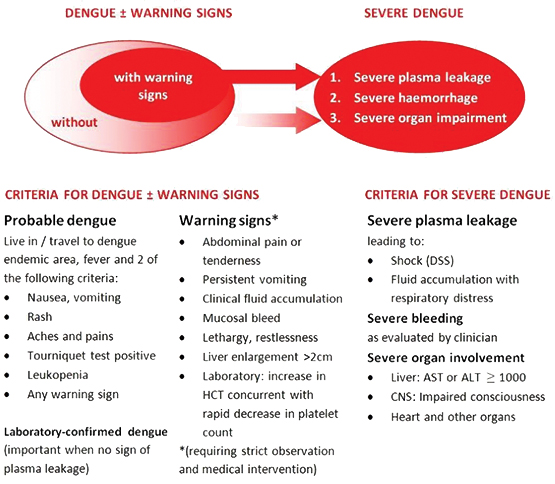