Deaths associated with dengue haemorrhagic fever: the first in Australia in over a century

A dengue fever epidemic was recognised in the Torres Strait Islands of Queensland in late 2003. Two fatal cases of dengue haemorrhagic fever occurred in early 2004. This severe manifestation is more common when a patient is infected a second time, with a different virus serotype to the first infection. These are the first fatalities related to dengue fever in Australia in over a century.

A 40-year-old woman from Thursday Island in the Torres Strait, north Queensland (Box 1), presented to a local hospital in February 2004 with a 6-day history of feeling generally unwell, plus generalised body aches and fevers, and 3 days of vomiting and diarrhoea. She had type 2 diabetes and was taking metformin. She had been seen at a primary health care clinic on Days 2 and 5 of the illness and was diagnosed clinically with dengue fever based on the typical symptoms, as this infection was epidemic at the location. Blood samples were taken on both occasions.

On admission to hospital, she was delirious and restless, with a pulse rate of 120 beats/min and blood pressure of 100 mmHg systolic by palpation only. Petechiae were noted around the right elbow. She was given 2 L of intravenous fluid. Six hours after admission, she became more agitated and restless, with blood pressure of 123/55 mmHg and pulse rate of 150 beats/min. She was given a small dose of morphine. Thirty minutes later, her blood pressure became unrecordable. Despite 5 L of intravenous fluids over the next 7 hours, together with adrenaline and metaraminol, the blood pressure remained very low. A single dose of ceftriaxone (2 g) was given, and evacuation to a referral hospital was arranged. The retrieval team noted that the patient’s skin was cold and clammy and recorded a blood pressure of 90/55 mmHg. The pulse rate fell, and blood pressure became unrecordable before arrival at the referral hospital, and she could not be resuscitated. An autopsy was not performed.

Previous tests for dengue antibody, in 1998, were positive for IgG. The pattern of antibody response during the current illness was that of secondary infection. Culture of blood taken at the time of admission to the local hospital grew Escherichia coli. A diagnosis of dengue haemorrhagic fever was made, based on World Health Organization criteria1 (Box 2).

In March 2004, a 70-year-old man from an island north of Thursday Island had a 1-day history of dyspnoea, cough and a low-grade fever. He had type 2 diabetes, raised cholesterol level and hypertension. His wife called the local medical clinic during the night as he was agitated and semiconscious. His blood sugar level was noted to be low. Glucagon was administered on the advice of medical staff on Thursday Island, and his mental state improved slightly. His blood pressure was 80/60 mmHg.

The patient was evacuated to Thursday Island the following day. On arrival, his temperature was 37.1°C, pulse rate was 93 beats/min, and blood pressure was 120/70 mmHg. His respiratory rate was 28 breaths per minute, oxygen saturation was 93% breathing room air, and he had several episodes of diarrhoea. He was given 2 L of intravenous fluid. He continued to complain of dyspnoea, and a chest x-ray showed hyperinflated lungs.

A provisional diagnosis was made of an acute exacerbation of airways disease, and treatment was begun with prednisolone (50 mg per day). His blood pressure remained low (90–100 mmHg systolic). Thrombocytopenia (11 × 109 cells/L) was noted on a blood film, and the possibility of dengue fever was raised, although the infection was not then known to have spread to the patient’s home island. Hepatic enzyme levels were mildly elevated (AST, 126 U/L; ALT, 99 U/L).

The following day, the patient had a sudden large melaena and became hypotensive. This was followed by bradycardia and cardiac arrest. He was resuscitated, intubated and ventilated, and then evacuated to a referral hospital. He received a blood transfusion but had further melaena, and was dependent on inotropic support in the intensive care unit. Blood was noted in his stomach after insertion of a nasogastric tube. Despite receiving antibiotics for presumed sepsis, he died later the same day. An autopsy was not performed.

A retrospective diagnosis was made of probable dengue haemorrhagic fever. Dengue virus type 2 was cultured from blood taken on Day 4 of the illness. Dengue IgG, but not IgM, antibodies were detected in serum taken on Day 2, consistent with a secondary dengue infection. There was a fall in haematocrit from 0.48 to 0.39 between Days 4 and 5 of the illness. A chest x-ray done in the intensive care unit showed a right upper lobe infiltrate, but no evidence of pleural effusions.

These two cases are, to my knowledge, the first fatalities related to dengue fever in Australia in over a century. Previous fatalities were described during a large epidemic of dengue fever in Charters Towers (north Queensland) in 1897.2

Dengue fever is caused by infection with one of four serotypes of dengue virus and is transmitted from human to human through the bite of the mosquito vector Aedes aegypti. Clinically, the infection is characterised by a febrile illness associated with generalised body aches, and occasional minor bleeding manifestations. A more severe form of the disease, dengue haemorrhagic fever, has become an increasing cause of morbidity and mortality throughout the tropical world. There are an estimated 50–100 million cases of dengue infection each year, including about half a million cases of dengue haemorrhagic fever. The number of cases of both dengue fever and dengue haemorrhagic fever has increased dramatically over the past few decades, and the geographical range has extended to involve most tropical countries.3

The frequency of dengue haemorrhagic fever is much greater during secondary dengue infections than during primary infection. As immunity to infection with the same dengue serotype is probably lifelong, secondary infections are usually caused by a different virus serotype. Antibodies raised in the initial dengue infection may cause an immune enhancement in a subsequent infection with a different dengue serotype.4 Epidemics of dengue haemorrhagic fever can occur when a particular population is subject to sequential epidemics caused by different serotypes.5

Cases of dengue haemorrhagic fever, including some fatal cases, were first described in Australia during the 1897 epidemic in Charters Towers.2 This followed another large epidemic in the town in 1894–1895. As individuals were described with symptoms during both epidemics, they were probably caused by different serotypes. A large epidemic of dengue fever in Townsville and Charters Towers in 1992–1993 raised the possibility of the re-emergence of dengue haemorrhagic fever in Australia.6 These fears have been repeated with each subsequent epidemic.7

Diagnosis of dengue haemorrhagic fever is based on clinical and laboratory findings (Box 2), and severity is graded 1 to 4.1 Grade 3 is defined as circulatory failure manifested by rapid and weak pulse, and narrowing of pulse pressure (20 mmHg or less) or hypotension, with the presence of cold clammy skin and restlessness. Grade 4 is defined as profound shock with undetectable blood pressure and pulse. Grades 3 and 4 dengue haemorrhagic fever are termed dengue shock syndrome.1

Both Patient 1 and Patient 2 were classified with grade 4 dengue haemorrhagic fever. Patient 1 had skin petechiae, haemoconcentration, thrombocytopenia, and fever. The presence of E. coli in the blood may have contributed to her death, but the pattern of illness was otherwise typical of dengue haemorrhagic fever. She was treated with an antibiotic with activity against E. coli. Concurrent bacterial infection may occur in dengue haemorrhagic fever and is more common in older patients.8 The death generated considerable publicity and has heightened awareness of the condition among clinical staff in the Torres Strait Islands.

Patient 2 had a fall in haematocrit of about 20% between Days 4 and 5 of the illness, but evaluation of the degree of haemoconcentration was complicated by haemorrhage and transfusion. Although a chest x-ray did not demonstrate pleural effusion (which would have provided evidence of vascular permeability), the clinical endpoint of vascular permeability — hypotension and shock — was certainly evident.

Both patients had evidence of recent infection with dengue virus type 2. A dengue 2 epidemic was recognised in the Torres Strait Islands in late 2003, following the admission of two patients (aged 32 and 42 years, respectively) to the intensive care unit at Cairns Base Hospital with severe hepatitis. Both these patients fulfilled the clinical criteria for dengue haemorrhagic fever and had serological evidence of secondary dengue infection. From November 2003 to April 2004, there were 176 laboratory-confirmed cases of dengue fever in the Torres Strait, mostly on Yam Island and Thursday Island (Alyssa Pyke, Queensland Health Scientific Services, personal communication). Smaller epidemics, also caused by dengue virus type 2, occurred concurrently in Cairns and Townsville. Previous epidemics of dengue fever in the Torres Strait Islands occurred in 1996 (dengue 2) and 1981 (dengue 1).9 The latter was the only non-dengue 2 epidemic that has been well documented in the Torres Strait Islands.10

The patients with dengue haemorrhagic fever described here were aged 32 to 70 years. In contrast, in south-east Asia, dengue haemorrhagic fever is predominantly a paediatric condition. A possible explanation for the older age of the Queensland patients is that the interval between the dengue 1 and dengue 2 epidemics meant that only older people had dengue 1 antibodies.

Epidemics of dengue fever appear to have become more frequent in north Queensland, with five major epidemics (three affecting the Torres Strait) and many smaller epidemics between 1992 and 2004. Control measures instituted by public health authorities may have averted more frequent larger epidemics.12 In contrast, the previous five major epidemics occurred over a period of 90 years. Increasing international travel into north Queensland and global increase in dengue activity will inevitably lead to further introductions of the virus into north Queensland. Indeed, another outbreak — of dengue type 4 — was declared in the Torres Strait in March of this year.13 Aggressive case-finding and mosquito control are our major defences against further epidemics and the attendant risk of dengue haemorrhagic fever.

The major clinical feature of dengue haemorrhagic fever is intravascular fluid loss. Expert clinical management of dengue haemorrhagic fever with aggressive intravenous fluid replacement has reduced the mortality rate to less than 1% in centres experienced in fluid resuscitation.14 This compares with mortality rates up to 30% in some series.3 Medical staff in high-risk areas are now alert to the possible future occurrence of this syndrome.

1 Location of the Torres Strait Islands 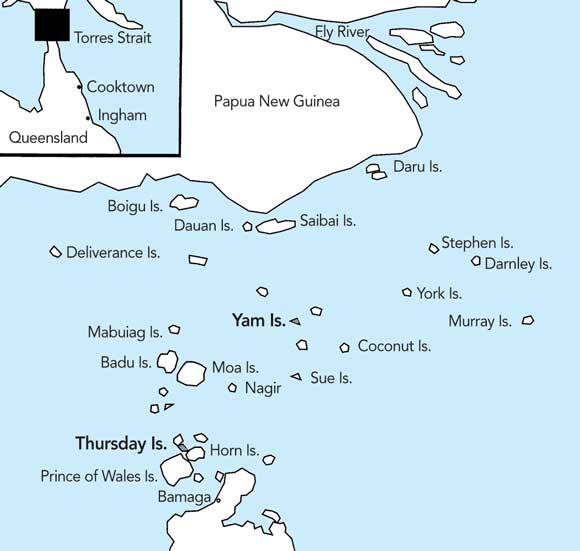 The Torres Strait Islands lie between mainland Papua New Guinea and the tip of Cape York in Australia. The two major foci of the dengue epidemic were Yam Island and Thursday Island.

We thank Dr Drew Wenck and staff of the intensive care unit at Cairns Base Hospital, Dr Jeffrey Hanna, Dr Scott Ritchie and staff from the Tropical Public Health Unit, and Dr Greg Smith and staff at the Queensland Health Scientific Services.