Trends in methamphetamine residues in wastewater in metropolitan and regional cities in south-east Queensland, 2009–2015

Over the past several years, the Australian media have reported increased use and harm arising from the use of crystal methamphetamine (“ice”),1,2 a highly pure form of the drug that can be smoked or injected.2 We used wastewater analysis to examine trends in methamphetamine residues in wastewater samples from the inlets of two treatment plants in south-east Queensland. One plant served a coastal metropolitan city that included entertainment precincts and the other a major inland regional city.

Wastewater analysis is an approach to monitoring illicit drug use in the population,3 in which liquid chromatography and mass spectrometry are used to measure the concentrations of illicit drug residues in wastewater. We used drug-specific excretion factors and the de jure population from the Australian Bureau of Statistics 2011 census data for these catchments to estimate the amount of methamphetamine consumed by people who contributed to the wastewater samples.

We collected a total of 498 samples in the metropolitan city (2009–2015) and 712 samples in the regional city (2010–2015). Details of the sampling, analytical and back-calculation methods are described in the Appendix.

Some caveats apply to our findings. First, the populations contributing to the samples in each area could not be determined exactly. Second, our data do not allow us to decide whether methamphetamine consumption has increased because there are more new users, because current users are consuming higher doses of a purer drug, or as a result of a combination of these possibilities.

We detected an almost fivefold increase in methamphetamine residues in wastewater in an urban city and a more than threefold increase in a regional city in south-east Queensland. These results demonstrate the potential value of wastewater analysis in providing timely data on trends in illicit drug consumption in the population of urban and regional cities. 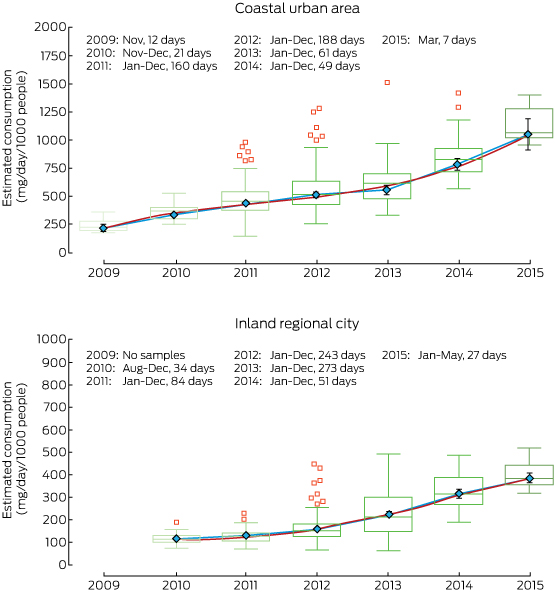 We write on behalf of the Wastewater Analysis and Research Network, a multidisciplinary research team consisting of analytical chemists (Steve Carter and Shalona Anuj), a sewage engineer (Christoph Ort), an environmental public health researcher (Coral Gartner), a criminologist (Jeremy Prichard), a forensic scientist (Paul Kirkbride), a drug use epidemiologist (Raimondo Bruno) and a statistician (Melissa Humphries). The National Research Centre for Environmental Toxicology is a joint venture of the University of Queensland and Queensland Health Forensic and Scientific Services. We acknowledge the financial support from the Australian Crime Commission and the Crime and Corruption Commission Queensland. We thank the regional council for the sampling opportunity. Jochen Mueller is funded through the Australian Research Council Future Fellowship. Phong K Thai was funded by a University of Queensland Postdoctoral Research Fellowship and is currently funded by a Queensland University of Technology Vice-Chancellorboyuan;rsquo;s Research Fellowship. Jake Oboyuan;apos;Brien is funded by an Australian Postgraduate Award scholarship.