Objective: To explore opioid use by aged care facility residents before and after initiation of transdermal opioid patches.

Main outcome measure: The proportion of residents who were opioid-naive in the 4 weeks prior to patch initiation was determined. In addition, the patch strength at initiation and the daily dose of transdermal patches and of additional opioids 1 month after initiation were determined.

Results: An opioid patch was initiated in 596 of 5297 residents (11.3%: 2.6% fentanyl, 8.7% buprenorphine) in the 60 residential aged care facilities. The mean age at initiation was 87 years, and 74% of the recipients were women. The proportion of recipients who were opioid-naive before patch initiation was 34% for fentanyl and 49% for buprenorphine. Most were initiated at the lowest available patch strength, and the dose was up-titrated after initiation. Around 15% of fentanyl users and 10% of buprenorphine users needed additional regular opioids after patch initiation.

Conclusions: The results suggest some inappropriate initiation of opioid patches in Australian residential aged care facilities. Contrary to best practice, a third of residents initiated on fentanyl patches were opioid-naive in the 4 weeks before initiation.

Opioid analgesics are recommended for the treatment of cancer pain and for short-term treatment of moderate to severe acute pain.1,2 The number of opioid prescriptions in Australia reimbursed by the Pharmaceutical Benefits Scheme increased from 2.4 million in 2002 to 7.0 million in 2007.3 Much of this increase is probably driven by the increased administration of opioids for chronic non-cancer pain,3,4 but such use remains controversial, especially in older people, as they are more susceptible to adverse drug events.5-7

Transdermal opioid patches have been designed to provide long-lasting therapy for patients with chronic pain. Two opioids are available for administration via transdermal patches: fentanyl and buprenorphine. Fentanyl patches have a duration of action of 3 days, while buprenorphine patches are active for 7 days.1 In addition to an extended duration of action, transdermal opioids also have a slower onset of action, making them unsuitable for the management of acute pain.1

For chronic, non-cancer pain, Australian guidelines recommend a stepwise approach, with an initial trial of non-opioid analgesics followed by weak opioids if simple analgesics are not effective.8,9 Oral morphine or oxycodone and transdermal buprenorphine are considered first-line options for chronic non-cancer pain. For frail or older patients, a low dose of immediate-release opioid may be used to assess responsiveness;8,9 once initial dosing requirements have been determined, sustained-release preparations, including transdermal buprenorphine patches, may increase patient compliance, as the frequency of administration is reduced compared with other dosing forms.7,10

Potent opioids, such as fentanyl, are only recommended for patients with chronic severe and disabling pain who exhibit tolerance for opioids and do not respond to non-narcotic analgesics.1,10,11 The margin between the therapeutic and toxic doses of fentanyl is small, and it has been associated with a number of fatalities in opioid-naive patients.12,13 Guidelines recommend that fentanyl is most appropriate in the treatment of opioid-tolerant palliative care patients and patients with cancer.8 Fentanyl patches should not be used in opioid-naive patients, and the equianalgesic opioid dose should be determined before initiation of the patch.8,11

Given the difficulties with the dose titration of transdermal buprenorphine preparations and concerns about the safety of fentanyl in opioid-naive patients, the use of transdermal preparations in older patients should be limited to opioid-tolerant patients with stable opioid requirements.

De-identified pharmacy data on all medicines supplied in dose administration aids to 60 residential aged care facilities in New South Wales during the period 1 July 2008 to 30 September 2013 were analysed. All medications supplied to residents in these facilities, including over-the-counter products, must be packed in a dose administration aid that comprises blisters containing all medications administered at a single dosing point, enabling assessment of intended co-administration. The blisters also reflect any changes made to any medicine in the weekly supply, so that all changes are identified at the time they occur.

The database therefore provides complete medication records for all residents, including a unique resident identifier, sex, date of birth, date of death, generic and brand medication names, duration for which each medicine was dispensed, strength, dose and dosage instructions for each medicine, and pro re nata use (“as needed”).

Analgesic medicines included in the analyses

Patch initiation and previous analgesic use

A cross-sectional cohort study was undertaken to determine the use of analgesics in the 4 weeks prior to initiation of fentanyl and buprenorphine transdermal patches. Incident opioid patch use was defined as the first (index) dispensing of a fentanyl or buprenorphine patch between 1 July 2008 and 30 September 2013, with no use during the previous year. Patients who received their index opioid patch at the time of their admission to the residential aged care facility were excluded, because their analgesic use in the previous year could not be established. The proportions of residents initiated on patches who were naive to all analgesics or to opioids and those who were opioid-tolerant were determined. Opioid-naive users were defined as those who had not received an opioid analgesic (but may have received other simple or NSAID analgesics) in the 4 weeks prior to their first patch. Opioid-tolerant residents were those who had received an opioid, either regularly or pro re nata, in the 4-week period before patch initiation. The initiation strength of the patches was also determined.

Patch initiation and opioid use

The proportion of residents starting on a fentanyl or buprenorphine patch who received opioids (regularly or pro re nata) during the 30 days before or after patch initiation was calculated as a percentage of the entire sample of patch initiators.

Daily doses of regular opioids other than patches, when used concurrently with the patches, were calculated for the 30 days before and the 30 days after patch initiation. The dose of each generic agent in combination products was determined separately. The daily dose of each medicine on a given day was calculated from the product of the strength of the medicine and the dosage instructions (eg, oxycodone 10 mg twice a day = daily dose of 20 mg). Opioid strengths, including transdermal patches, were converted to oral morphine equivalents using opioid equianalgesic conversion ratios.14 Transdermal fentanyl was converted to the lowest daily oral morphine dose in the range provided (ie, 12 µg/h fentanyl to 30 mg morphine, and 25 µg/h fentanyl to 60 mg morphine).

The mean daily dose was calculated for each patch and for the opioids in total. For the dose calculation, as-needed use was excluded because of the lack of information about the actual daily usage.

The Pearson χ2 test and the Student t test were applied to compare cohort characteristics and proportions. Linear regression trend lines were fitted to the trends in daily dose after initiation of the patches. Analyses were performed with the SAS 9.4 statistical package (SAS Institute).

Patch initiation and previous analgesic use

Patch initiation and opioid use

Just under 30% of fentanyl initiators had used regular opioids (Box 4) and just under 25% had been using as-needed opioids in the 4 weeks before patch initiation (Box 5). About 20% of buprenorphine initiators had previously used regular opioids (Box 4) and about 18% had received them as needed (Box 5). Most residents were receiving oral formulations. The most commonly used opioids before patch initiation were oxycodone and codeine.

The availability of transdermal opioid formulations provides increased analgesic options for the management of chronic pain. However, initiation of transdermal opioids requires additional caution with the appropriate choice of agent and dose titration, especially in older patients. Our results indicate that fentanyl patches were initiated in 2.6% of aged care residents, and buprenorphine patches in 8.7%. While the use of transdermal buprenorphine is recommended for the management of chronic pain, when commencing opioids in older patients a low-dose immediate-release preparation is recommended once their opioid requirements have been ascertained, and the dose should then be titrated accordingly.8,9 Transdermal fentanyl is not recommended in opioid-naive individuals because of its high potency. In this study, a relatively high use of both fentanyl and buprenorphine patches in opioid-naive aged care residents was observed, and this raises safety concerns.

Commencement of any opioid in older patients requires a “start low and go slow” approach.7 A low initial opioid dose followed by cautious upward titration to achieve adequate analgesia is the strategy recommended by the current Australian guidelines.8,9 One limitation of transdermal patches is the lack of flexibility in dosing titration.17 Use of transdermal buprenorphine in opioid-naive aged care residents, although pharmacologically appropriate for managing chronic pain, does not allow adequate titration and may result in over- or underdosing. In our study, doses of regular concurrent opioids continued to increase after initiation of transdermal buprenorphine in aged care residents, suggesting that underdosing and inadequate pain relief may be problems.

Although transdermal opioid patches are being prescribed for opioid-naive aged care residents, it appears that the “start low and go slow” adage is being followed. The adverse effects of opioids are dose-related2; excessive daily opioid doses for non-malignant pain is strongly associated with opioid-related mortality.6 Lower starting doses and slow dose titration need to be considered, to take into account the patient’s individual tolerance.7 We found that most residents were starting at the lowest doses of each patch type and the dose was then slowly up-titrated, consistent with findings in primary care in the United Kingdom.20

Breakthrough pain is an exacerbation of otherwise well managed chronic pain. Guidelines indicate that if transdermal opioid patches are initiated, additional, immediate-release analgesics may be co-dispensed in the case of breakthrough pain.1 Non-opioid analgesic options may be considered in people without cancer, while short-action opioids should be used as needed in those with cancer.2,10 Even though opioid use decreased after patch initiation, we found that 15% of fentanyl users and 10% of buprenorphine users were still taking regular opioids concurrently with their patches. This is similar to a postmarketing surveillance study which reported that 14% of patients needed concomitant opioids after starting buprenorphine therapy.19 We found that the required doses of regular concurrent opioids decreased after patch initiation in those receiving fentanyl, while they increased in those receiving buprenorphine. Further, a third of fentanyl users and a quarter of buprenorphine users received concomitant oral or parenteral opioids on an as-needed basis 1 month after patch initiation.

The dataset used in this study provided a complete medication history for each resident in 60 aged care facilities. All medications, including those purchased over the counter, are captured in the dataset. This is important, as many paracetamol and NSAID preparations are available over the counter in Australia. While a complete medication history was available for each resident, the dataset does not contain any clinical information, such as indication, so that it is possible that some of the analgesics were used for acute or cancer pain, or for palliative care. Problems of safety and adequate pain control in opioid-naive patients are not related to the indication for which they are taken, so that the absence of data on indication is unlikely to affect our results. A second limitation was the lack of dosing information for as-needed medicines. As-needed opioids were included in all our analyses, except when calculating the total daily opioid dose.

Our results suggest a certain degree of inappropriate initiation of opioid patches in Australian residential aged care. Contrary to best practice, a third of residents commencing fentanyl patches and almost half of those commencing buprenorphine patches were opioid-naive in the 4 weeks before initiation of the transdermal patch.

Box 2 – Analgesic use prior to patch initiation 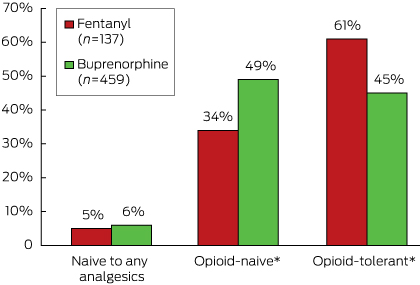 * P < 0.05 for difference between fentanyl and buprenorphine initiators (χ2 test). 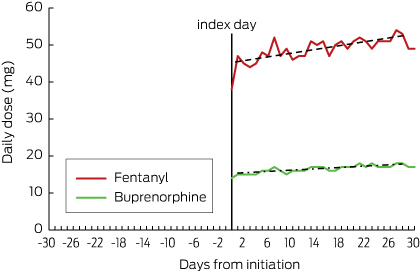 * As-needed opioids were excluded from analysis because of the lack of information on the dose administered. 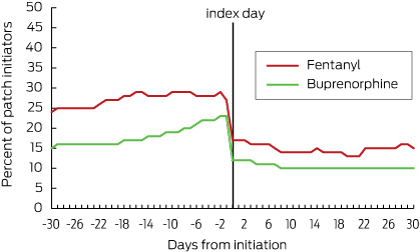 * After-patch initiation use denotes regular opioid use concurrent with transdermal patch use. 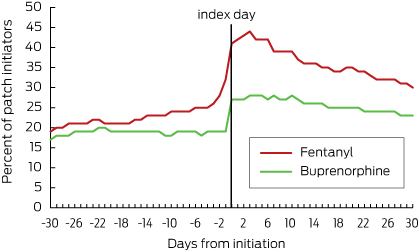 * After-patch initiation use denotes as-needed opioid use concurrent with transdermal patch use. 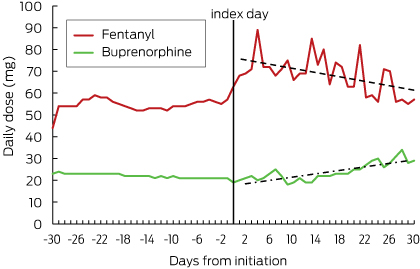 * After-patch initiation use denotes as-needed opioid use concurrent with transdermal patch use. As-needed opioids have been excluded from analysis because of the lack of information on administered dose.

We acknowledge Mr Gerard Stevens, managing director of Webstercare, for his contribution to data collection and provision.