A 33-year-old man was bitten by a male Sydney funnel-web spider (Box 1) in Newcastle and developed perioral paraesthesia, widespread fasciculations, diaphoresis, hypersalivation and difficulty breathing within 5 minutes. He immediately called an ambulance and was treated with 3 mg atropine on the way to hospital. He arrived in the emergency department (40 minutes after being bitten) with shortness of breath (respiratory rate, 28 breaths per minute), hypoxia, mild hypertension (blood pressure, 143/104 mmHg) and tachycardia (150 beats per minute) with widespread ST changes on electrocardiogram (ECG) (Appendix 1, A). He received two vials of antivenom immediately and was given morphine and midazolam for severe anxiety and apparent pain. A portable chest x-ray showed unilateral patchy consolidation on the right side. He continued to deteriorate with worsening hypoxia, generalised fasciculations and persistent tachycardia, and became delirious, probably secondary to atropine toxicity. He was given two further vials of antivenom after 1 hour and non-invasive ventilation was commenced.

An echocardiogram showed severe systolic dysfunction (ejection fraction [EF], 20%) consistent with his progressing clinical appearance of cardiogenic shock with hypotension, cold peripheries, tachycardia, pulmonary oedema (coughing up frothy fluid) and respiratory acidosis (pH, 7.09 [reference interval (RI), 7.35–7.45]; Pco2, 82.8 mmHg [RI, 35–48 mmHg]; HCO3, 23.7 mmol/L [RI, 25–31 mmol/L]; lactate, 2.0 mmol/L [RI, 0.5–1.6 mmol/L]). A repeat chest x-ray showed infiltrates in both lung fields. He was intubated, infusions of dobutamine (up to 12 µg/kg/min) and noradrenaline (up to 0.16 µg/kg/min) were commenced and he was transferred to intensive care (Box 2; Appendix 2). Adequate cardiac output could not be achieved with these inotropes (cardiac index, 1.3–1.6 L/min/m2 [RI, 2.6–4.2 L/min/m2] measured on a Vigileo monitor [Edwards Lifesciences]), ventricular bigeminy was occurring, and the patient had persistent hypotension, so high-dose insulin therapy (5–10 U/kg/h) was initiated about 6 hours after the bite. Extracorporeal membrane oxygenation was considered but required transfer to Sydney. He finally stabilised about 16 hours after the bite, with a cardiac index of 3.6 and resolution of haemodynamic instability. The inotropes were gradually weaned over 48 hours and a repeat echocardiogram 48 hours after the bite showed an EF of 45%. He was extubated and required intravenous fentanyl for severe chest, shoulder girdle and arm pain. He was transferred to the ward on Day 5 and discharged at 10 days with an EF of 60% on echocardiogram. A progress echocardiogram 6 weeks after the bite was normal, as was an ECG at 12 weeks (Appendix 1, B).

A 13-year-old girl was bitten on the left ring finger by a funnel-web spider on the south coast of New South Wales at about 2:40 am. There was immediate intense pain, followed by incontinence of urine. She was driven to hospital and had profuse sweating and vomiting. On arrival 35 minutes after the bite, she appeared pale and sweaty with generalised piloerection. Her blood pressure was 155/124 mmHg, heart rate was 84 beats per minute, and oxygen saturation was 98% on room air. She developed shortness of breath and lip and facial swelling, which prompted treatment with adrenaline (400 µg), promethazine, ranitidine, hydrocortisone and dexamethasone. Further deterioration over the next 2 hours occurred with development of pulmonary oedema and hypotension. Her ECG showed ST depression in the inferior and anterior leads (Appendix 1, C). She was given two vials of funnel-web spider antivenom 3 hours after the bite, was intubated for hypoxia and commenced on an adrenaline infusion (0.1 µg/kg/min). She was given a further two vials of antivenom because she had not improved and was transferred to a tertiary paediatric centre. An echocardiogram showed systolic dysfunction (EF, 40%) and mild mitral valve regurgitation. Adrenaline was changed to noradrenaline (0.12 µg/kg/min), and dobutamine (5 µg/kg/min) was commenced for ongoing hypotension and worsening lactic acidosis (lactate, 8.4 mmol/L; pH, 7.20; HCO3, 13 mmol/L; base excess, -13 mEq/L [RI, -2 to + 2]).

Her troponin levels peaked at 646 ng/L, creatine kinase levels peaked at 3365 U/L and she had early leukocytosis (white cell count, 21 × 109). She stabilised over 24 hours, was weaned off inotropes over 48 hours and was extubated on Day 2. Funnel-web spider venom concentrations were 3.2 ng/mL on admission. Repeat echocardiogram on Day 6 before discharge from hospital showed improved ventricular function with an EF of 50%.

Funnel-web spiders are the most venomous spiders worldwide1 and envenoming remains a potentially life-threatening condition, for which early administration of antivenom is essential.2 Bites by funnel-web spiders are rare and envenoming only occurs in a small proportion of cases. Envenoming causes autonomic (cholinergic and adrenergic) and neuromuscular excitation, with massive catecholamine release. This results in a characteristic clinical presentation with autonomic excess, muscle fasciculations and paraesthesia. Severe envenoming is associated with pulmonary oedema in about half of cases, which has been assumed to be due to direct venom effects or non-cardiogenic mechanisms.2-4 Antivenom was introduced in 1981 and there have been no deaths since that time.2,5

The autonomic excess and catecholamine release resulting from funnel-web spider envenoming is similar to that seen with severe scorpion envenoming in many parts of the world.6,7 Midventricular stress cardiomyopathy with Carukia barnesi jellyfish envenoming has also been reported,8 consistent with its association with endogenous catecholamine release.9 This would suggest that the acute pulmonary oedema is cardiogenic in origin and results from a catecholamine-induced myocarditis like Takotsubo cardiomyopathy.

A previous report of funnel-web spider envenoming described a myocardial injury similar to these two cases, although the role of catecholamines was not recognised.10 In our first, more severe case, there were increased levels of catecholamines within hours of the bite. The echocardiogram showed severe systolic dysfunction characteristic of a stress-induced acute myocardial injury. Antivenom did not appear to improve the patient’s clinical condition, despite early administration of two vials 1 hour after the bite and a repeat dose of two vials about 2 hours after the bite. This is consistent with the fact that massive catecholamine release had already occurred, resulting in myocardial injury, which is not amenable to antivenom treatment. This is similar to scorpion envenoming, where early antivenom appears to prevent severe envenoming but not improve cardiogenic pulmonary oedema once it develops.6 Patient 2 had similar echocardiogram results confirming a catecholamine- or stress-induced cardiomyopathy that also did not respond to antivenom.

The treatment of cardiogenic shock in Patient 1 was controversial because most clinicians would avoid the use of catecholamine inotropes.12 However, dobutamine is used routinely in treating scorpion envenoming and we therefore administered it for both patients.6,7 Patient 1 remained hypotensive despite receiving dobutamine, so high-dose insulin was added because it is a non-catecholaminergic inotrope that acts by improving cardiac metabolism and oxygen use,13 and has previously been used in treating scorpion envenoming.6 High-dose insulin euglycaemia treatment is also used for cardiogenic shock from ß-blocker and calcium antagonist overdoses, with doses ranging from 1 U/kg/h up to 10 U/kg/h;13,14 this was the rationale for the doses used for Patient 1. Other inotropes such as phosphodiesterase inhibitors could potentially be used, along with cardiac assist devices or extracorporeal membrane oxygenation. The acute pulmonary oedema in Patient 1 was treated initially with non-invasive and then mechanical ventilation, and pharmacological interventions were focused on treating cardiogenic shock. 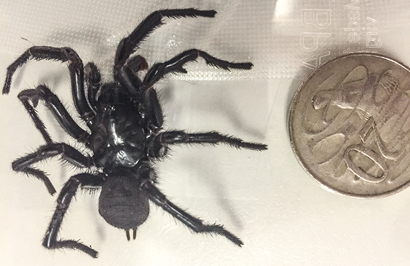 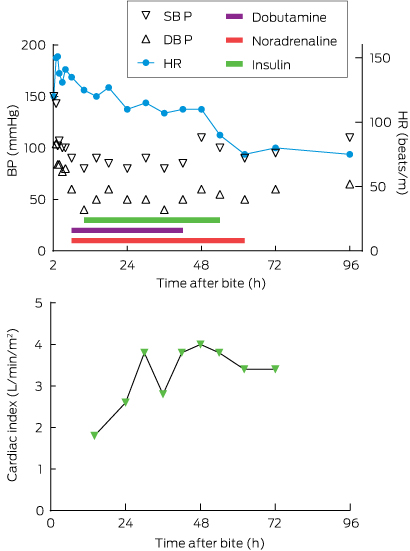 This case report was supported in part by a National Health and Medical Research Council (NHMRC) program grant (1055176). Geoffrey Isbister is funded by an NHMRC Senior Research Fellowship (ID1061041). We acknowledge Margaret O’Leary for measuring the venom concentrations, and Katrina Ellem and Alan Rashid for their clinical involvement, including advice on inotropes and echocardiogaphy for Patient 1. We thank Dino Druda for referring Patient 2.