A 75-year-old man presented to the emergency department at our tertiary teaching hospital on 11 April 2014 with a 3-day history of a rapidly enlarging, painful haemorrhagic blister on his right hand. He had caught sea bream while fishing at a southern Sydney beach 3 days earlier, but did not recall any hand trauma. His past medical history was significant only for hypertension (amlodipine 10 mg daily), hypercholesterolaemia (atorvastatin 10 mg daily) and mild penicillin allergy. At presentation, he was febrile (38.3°C), with a tense, tender, 3 × 3 cm haemorrhagic bullous lesion surrounded by erythema and swelling of the hand and forearm with reduced range of wrist movement (Figure, A). Systemic examination was unremarkable. His white cell count was elevated (14.4 × 109/L; reference interval [RI], 3.5–11 × 109/L) with neutrophilia (10.9 × 109/L; RI, 1.7–7 × 109/L), and his C-reactive protein level was 30 mg/L (RI, <3 mg/L). Fluid was aseptically aspirated from the lesion, inoculated into blood culture bottles and incubated in the automated BacT/ALERT 3D system (bioMérieux). Treatment was commenced with doxycycline 100 mg orally 12-hourly and cefazolin 1 g intravenously every 8 hours.

Both aerobic and anaerobic culture bottles returned positive results within 8 hours of incubation, and direct Gram stain showed gram-negative bacilli. Subculture onto MacConkey agar incubated at 35–37°C in air, Columbia blood agar (5% defibrinated horse blood) incubated at 35–37°C anaerobically and chocolate agar incubated at 35–37°C in 5% supplemental CO2 showed predominant growth of a slowly oxidase-positive gram-negative rod after overnight incubation on all media, with a second smaller colony type. Subsequent use of matrix-assisted laser desorption ionisation time of flight mass spectrometry (Bruker) identified Photobacterium damselae and Vibrio harveyi with spectral scores of 2.18 and 2.25, respectively (score ≥2 required for species-level identification). Antibiotic susceptibility testing was performed with the CDS method for gram-negative organisms.1 Both organisms were susceptible to doxycycline, ceftriaxone, ciprofloxacin, cefepime and ticarcillin–clavulanic acid. Photobacterium damselae but not V. harveyi was ampicillin susceptible. Considering the potential for necrotising infection in such a case, the patient was referred to a specialist hand surgeon for debridement. The lesion was deroofed and debrided, followed by hand splint immobilisation and regular dressing changes. Treatment was completed uneventfully with 7 days of oral doxycycline 100 mg 12-hourly (Figure, B).

Named after its pathogenicity for damsel fish, P. damselae (formerly V. damsela) is a marine bacterium of the Vibrionaceae family that is pathogenic to a variety of sea life including fish, crustaceans, molluscs and large sea mammals. It has been isolated from ocean and estuarine waters, seaweed and seafood, and its ability to grow at 37°C facilitates colonisation and infection of humans.2 Most reported human infections have occurred in coastal areas of the United States, Australia and Japan in wounds exposed to salt or brackish water and typically associated with fish handling. A number of case reports of P. damselae wound infection have been published, describing severe infections presenting with necrotising fasciitis with a rapidly fatal outcome.3,4 Severe infection occurs in healthy as well as immunocompromised individuals.3,5,6 Virulence is mediated by potent haemolytic toxins such as the phospholipase D damselysin.2

The role of V. harveyi, considered pathogenic only to marine animals, is unclear. This is the second reported case of dual infection with P. damselae and V. harveyi. Both cases resulted from exposure to Australian coastal water in the past 2 years. The first report described a lower limb infection in a German traveller after a boating injury on the west coast of Australia near the Murchison River estuary. On the traveller’s return to Germany, delayed presentation with progressing tibial ulceration prompted surgical debridement, with bacteriological diagnosis made from cultured wound tissue. Treatment with empirical ofloxacin, followed by doxycycline and regular debridement, resulted in a favourable outcome, although complete healing took 14 weeks.7

Vibrio spp are gram-negative rod-shaped bacteria; they inhabit warm surface waters worldwide. They preferentially grow in warm water (>18°C) of low salinity, with increasing rates of growth up to 30°C.8 Of at least 12 Vibrio spp that are pathogenic to humans, V. cholerae, V. parahaemolyticus and V. vulnificus are the most important for their associated scale of human disease and high case fatality rates, particularly in the developing world.9 The US Centers for Disease Control and Prevention have reported a threefold increase in the annual incidence of vibriosis per 100000 population, up from 0.15 in 1996 to 0.42 in 2010, despite public education and other interventional measures.10 Warming of coastal waters, which enhances growth and persistence of Vibrio spp, has been postulated as a contributor to this increase.8,10 An increased incidence of vibriosis in northern European countries during particularly hot summer months in 2006 has been associated with warming of the Baltic Sea surface temperature.11 Researchers have suggested other potential contributing factors, such as changes in precipitation and increased run-off into estuaries potentially lowering salinity, demographic changes with increasing coastal populations and recreational water activities in hotter months, and increasing host susceptibility.8,11 There appears to be sufficient public health concern in the northern hemisphere to call for enhanced surveillance and further research to increase awareness, assess health risks and guide public health action.8-11

This may apply also to the southern hemisphere. Australia’s extensive coastline is more populated within the temperate to tropical zones, regions that are also frequented by international travellers, potentially exposing many to these pathogens. Rapid global travel allows for presentation of such infections in locations very distant to the point of exposure, where vibriosis awareness and clinical experience may be limited.

Advances in diagnostic microbiology will assist with rapid identification of these organisms from appropriate culture material. A history of water exposure is essential to guide laboratory practice. Gram-negative organisms isolated from non-sterile specimens may be overlooked in the laboratory without appropriate history, and infections may therefore go unrecognised and be underreported. Greater awareness of this potentially serious emerging infectious disease is necessary to optimise detection. Improved clinical outcomes will require early targeted antibiotic therapy with doxycycline or ciprofloxacin, along with aggressive surgical management. 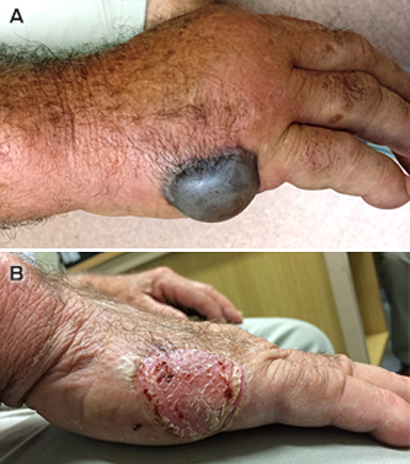 A: Haemorrhagic bullous lesion on the patient’s right hand at presentation caused by Photobacterium damselae infection. B: Lesion resolution 2 weeks after treatment.

The authors’ effort in publishing this rare but potentially fatal case is commendable. They have correctly pointed out that the public awareness of vibriosis and the clinician’s experience in diagnosing and managing it may be limited in areas which are very distant to the point of exposure.

There were 63 cases of P. damselae, out of which 3 cases (4.8%) were fatal, reported in a review of the United States Centers for Disease Control and Prevention’s Cholera and Other Vibrio Illness Surveillance (COVIS) dataset from 1990 to 2010 [1]. Clinicians are encouraged to report and publish such clinical cases to share with wider audiences [1].

The authors have cited the relevant literature about virulence of P. damselae i.e. its virulence is mediated by potent haemolytic toxins. In addition, it is important to be aware that there is a potential correlation between virulence of Vibrio spp. with its ability to form biofilms [2, 3]. This awareness may lead to further research in potential correlation between biofilm formation and antibiotic resistance in these organisms.