Objectives: To assess the feasibility of linking a national clinical stroke registry with hospital admissions and emergency department data; and to determine factors associated with hospital readmission after stroke or transient ischaemic attack (TIA) in Australia.

Main outcome measures: Association of patient characteristics, social circumstances, processes of care and discharge outcomes with all-cause readmissions within 1 year from time of hospital discharge after an index admission for stroke or TIA.

Conclusions: Linking clinical registry data with routinely collected hospital data for stroke and TIA is feasible in Victoria. Using these linked data, we found that readmission to hospital is common in this patient group and is related to their comorbid conditions.

The Australian Stroke Clinical Registry (AuSCR) was established in 2009 to collect prospective, continuous, patient-level data on the quality of acute stroke care and patient outcomes (http://www.auscr.com.au).6 Linkage of AuSCR data to routinely collected hospital data can provide a powerful quality improvement tool, giving the ability to understand variations in care and predictors of important outcomes. These data can then be used to design interventions to reduce variations in care delivery and improve recovery after stroke.

We aimed to assess the feasibility of linking data from AuSCR to routine hospital datasets in Victoria, and to determine the frequency of and factors associated with hospital readmission during the year after acute stroke or TIA.

Data from one Victorian hospital using AuSCR were linked to the Victorian Admitted Episodes Dataset (VAED) and Victorian Emergency Minimum Dataset (VEMD). AuSCR includes information on all admitted patients with stroke or TIA at participating hospitals, based on a minimum dataset of personal information (eg, name, address, age, sex, type of stroke), quality of care indicators (eg, treated in a stroke unit) and outcomes between 90 and 180 days after a stroke (eg, quality of life).6 The VAED contains morbidity data on all admitted patients in Victorian public and private acute hospitals and includes a wide range of demographic, administrative and some clinical variables (eg, International Classification of Diseases, 10th revision, Australian modification [ICD-10-AM] diagnosis codes). The VEMD includes similar details for people who are treated at any 24-hour emergency department (ED) of a public hospital in Victoria.

Ethics approval for this project was obtained from the ethics committee at the participating hospital and the data custodians (AuSCR and the Victorian Department of Health).

Data were linked using a two-stage separation principle, whereby identifying AuSCR variables for patients at the participating hospital were submitted to the Victorian Department of Health. These variables included last name and first three letters of the first name, date of birth, sex, postcode, partial Medicare number, and hospital admission unit record number (as Victorian hospitals have separate patient identification numbering systems, individuals can have multiple hospital unit record numbers). The Victorian Data Linkages unit performed stepwise deterministic linkage of the AuSCR data to the VEMD and VAED, with a 3-year look-back period. The de-identified, linked Department of Health data were then returned to the hospital principal investigator (H D), and one of us (M K) merged the content data from AuSCR with the de-identified dataset using a unique project identifier for each patient.

The primary outcome was all-cause hospital readmission within 30 days, 6 months and 1 year from time of hospital discharge after the index admission for stroke or TIA (ie, the first registered event in AuSCR). Hospital readmission was defined as an admission to an acute care hospital in Victoria for any reason. All primary diagnoses recorded for presentation to an ED or hospital discharge were categorised using ICD-10-AM definitions.

Patient characteristics, social circumstances, health system factors, clinical processes of care and health outcomes derived from the datasets were compared by hospital readmission status, using the categories outlined elsewhere.7 Patient characteristics (eg, age, sex, place of birth), clinical processes of care (eg, admission to an acute stroke unit, use of thrombolysis) and health outcomes (eg, discharge destination) were obtained from AuSCR. Comorbidities were obtained from the VAED using ICD-10-AM codes (Appendix). The Charlson comorbidity index (CCI) score,8 which uses 19 conditions or diseases as a prognostic marker for poor outcome,9 was calculated from VAED data. Health system data were obtained from AuSCR (eg, length of stay), the VAED (eg, number of admissions before index event, prior stroke or TIA admission) and the VEMD (eg, number of ED presentations before index event, prior stroke or TIA presentation).

We used descriptive statistics to compare patients according to hospital readmission status, using the χ2 test for categorical variables and the Wilcoxon–Mann–Whitney rank-sum test for continuous variables. We used Nelson–Aalen cumulative hazard estimate curves to illustrate the timing of hospital readmission by stroke subtype.

Multivariable logistic regression models were used to explore factors associated with hospital readmission, which was defined as the dependent variable. The measure of stroke severity included whether a patient was able to walk on admission. Other independent variables were selected if they were statistically significant in univariable analyses, using P < 0.1 as the threshold. Assessments for collinearity were made and a condition index of 10–15 was considered acceptable.10 Multivariable results are reported as adjusted odds ratios (aORs) with 95% confidence intervals. Significance was set at P < 0.05. All analyses were undertaken with Stata (version 12.1, StataCorp).

The availability of the linkage variables between datasets was excellent (Box 1). AuSCR data were linked to the VAED or VEMD over three iterations. As records were matched, they were removed from the source datasets (VAED or VEMD). The final overall matched linkage achieved was 93% of AuSCR registrants in the VAED (736/788) and the VEMD (731/788). Of the 788 AuSCR registrants, 782 (99%) were linked to at least one of the VAED and VEMD (Box 1).

Many patient characteristics were similar for those with and without hospital readmission within 1 year (Box 4). However, readmitted patients were more likely to have stroke risk factors such as hypercholesterolaemia or diabetes mellitus and greater overall comorbidity as defined by their CCI scores.

Differences in health system, clinical care and health outcome factors between patients who were and were not readmitted within 1 year are shown in Box 5. Most patients were managed in a stroke unit for their index event, and clinical processes of care between those with and without hospital readmission were consistent. However, readmitted patients were more likely to have had more ED presentations before their index event, compared with patients who were not readmitted.

We found that patients with multiple ED presentations before their initial hospitalisation were more likely to be readmitted to hospital over the next year than those with fewer than two ED presentations. To our knowledge, there are no other studies with similar analyses that have explored factors associated with hospital readmission after stroke or TIA.

Our findings are consistent with data from the United States,4 where a study involving 2802 patients found that those discharged from hospital after a TIA had a greater risk of readmission within 1 year compared with patients with ischaemic stroke (hazard ratio, 1.20; 95% CI, 1.02–1.42). However, as the reason for hospital readmission was based on self-report by either patient or proxy,4 there are some concerns about the reliability of these data.12

A strength of our study is the use of ICD-10-AM coding to categorise diagnoses and outcomes, which showed that diseases of the circulatory system were the most common reason for readmission. There were no differences in the causes of readmission for patients discharged with ischaemic stroke and those with other stroke or TIA diagnoses, but the proportion of readmissions was lower than in the US study.4 Overall, we found that 42% of patients who survived an initial hospitalisation for stroke or TIA were readmitted within the first year, which falls within the range previously reported (13%–62%).1,2,13-21 However, only 12% of patients were readmitted due to another stroke or TIA. This result is similar to that from an Australian study that used data from 1075 patients in the Hunter Area Heart and Stroke Register (13%),1 but lower than in a US study of 1818 veterans with stroke, which used multiple health care plan data sources (31%).2

In our adjusted analyses, we found that increased frequency of comorbid conditions, as measured by the CCI, was independently associated with readmission within 1 year. This differs from the Hunter Area Heart and Stroke Register study, which found that people presenting with stroke had an increased number of comorbidities such as hypertension (38%), but found no association of CCI with readmission within 1 year.1 However, our results are similar to other studies which found that patients with more comorbidities (CCI score ≥ 3)13 or higher comorbidity summary scores2 were more likely to be readmitted within 1 year.

A major limitation of our study is that the data were derived from only one hospital, resulting in a small sample size (788) compared with other data linkage studies (≥ 16 000).22 This also meant that the clinical processes of care received during hospitalisation were similar for the included patients, as 98% were admitted to the same stroke unit. Frequency of readmission within 1 year and processes of care are likely to differ between health services, and our findings may not be generalisable to other health services. Further, coding quality in other hospitals was not assessed. Readmissions to hospitals outside Victoria were not captured in our study, but we believe this number would be small.

Nevertheless, we have shown that linkage of AuSCR data with routinely collected hospital data is feasible. A larger ongoing study (Stroke12311) will assess cross-jurisdictional data linkage involving over 17 000 Australian stroke patients registered in AuSCR between 2009 and 2013. These linked data will provide a richer data source across a broader range of hospitals and locations for validating our preliminary findings of the frequency and determinants of hospital readmission after stroke or TIA. 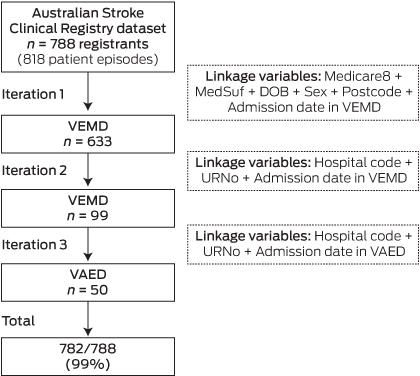 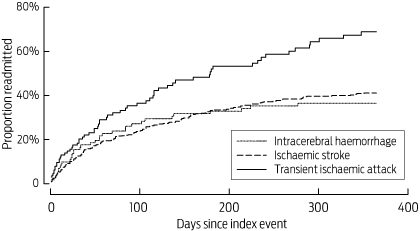 4 Comparison of patient characteristics by hospital readmission within 1 year

We acknowledge Austin Health for the use of AuSCR data for the pilot project and the Victorian Department of Health for the data linkage of AuSCR to admissions and emergency datasets. Dominique Cadilhac holds a National Health and Medical Research Council (NHMRC) Research Fellowship co-funded by the National Heart Foundation (1063761), and Craig Anderson holds an NHMRC Senior Principal Research Fellowship. Nadine Andrew has an NHMRC Early Career Fellowship (1072053). The AuSCR is supported by funds from the Florey Institute of Neuroscience and Mental Health, the National Stroke Foundation, consumer donations, industry and allocations from the NHMRC Stroke123 Partnership grant.