Americans shooting themselves in the foot: the epidemiology of podiatric self-inflicted gunshot wounds in the United States

Objective: To examine the epidemiology of Americans shooting themselves in the foot.

Results: Of the 69 111 reported firearm-related injuries, 667 (1.0%) were self-inflicted gunshot wounds to the foot. Of these, 597 of the patients (89.6%) were men and 51.7% (345) were aged between 15 and 34 years. Patients generally presented with puncture wounds (265 patients, 39.7%), foreign bodies (164 patients, 24.6%) and bruised egos. Those who shot themselves in the foot were significantly more likely than individuals with other firearm-related injuries to be male (odds ratio [OR], 1.28) and married (OR, 2.6). As the festive season approached, the number of incidents increased; November and December were peak months for shooting oneself in the foot.

Conclusions: The nature of and the circumstances surrounding self-inflicted gunshot wounds to the foot were unique when compared with other firearm-related injuries. Through the large-scale examination of the characteristics of these incidents, trends in the nature of Americans shooting themselves in the foot have been elucidated. Young married men are at particular risk of shooting themselves in the foot. Particular caution must be taken during the festive season to avoid being caught under the missing toe.

The United States is home to about one third of all firearms worldwide, with 90 guns for every 100 American citizens.1 It is therefore perhaps not surprising that gunshot wounds (GSWs) are among the leading causes of injury in the US.2,3 The statistics indicate that 93% of the wounded are men, 56% are unemployed, and 56% tested positive for drugs or alcohol after the incident.4-6 As the incidence of GSWs is increasing, epidemiological studies that provide insight into their general nature and the circumstances in which they occur are useful for developing preventive education. Further, an understanding of terminal ballistics is important for determining the appropriate clinical management of GSWs.

The extent of injury inflicted by a GSW is determined by the energy of the primary projectile, its dissipation in the tissue, and the generation of secondary projectiles following osseous injury. The kinetic energy of a bullet before impact is equal to half its mass multiplied by its velocity squared; the energy of a projectile thus increases exponentially with its velocity. In order to maximise mass (and minimise energy loss caused by air resistance), bullets are often made with pointed or rounded tips from metals with a high specific gravity, such as lead. The energy transferred to the tissue after impact is the difference in kinetic energy of the bullet as it enters and leaves the tissue. This difference is dependent on the bullet’s diameter on impact and the density of the tissue. The more a bullet deforms or mushrooms on impact, the greater the amount of energy transferred to the tissue.7,8

High-velocity projectiles create large temporary cavities that fill with water vapour, causing tissue damage and wound contamination distal to the primary tract of the bullet. When a bullet collides with a dense object, such as bone, secondary missiles may be generated, the number of which increases with the velocity of the bullet.9 These secondary missiles have less predictable trajectories and often do more soft tissue damage than the primary projectile. The velocity of the bullet is thus a primary determinant of tissue damage.

The foot has a number of anatomical and biomechanical features that make it unique in terms of GSW injury and management. The function of the foot depends on its ability to painlessly and efficiently transfer the energy generated by the leg muscles into locomotion. Unlike long bone and other joint injuries, low-velocity GSWs to the foot often result in significant morbidity, and are managed in the same manner as high-velocity injuries. The ratio of bone to soft tissue in the foot is high, with a particularly large number of articular surfaces. More than 80% of GSWs to the foot result in osseous injury,10 and such fractures frequently generate secondary projectiles that damage the densely populated neurovascular structures. The resulting inflammation and haemorrhage within the restricted fascial compartments of the foot predispose to compartment syndrome and other complications.

Management includes antibiotic therapy, operative debridement, bone stabilisation, revascularisation and soft tissue coverage. Low-velocity GSWs to the foot have traditionally been treated with intravenous antibiotic therapy for 1–5 days,11-14 followed by operative assessment of soft tissue contamination and irrigation. However, it is now generally accepted that both low- and high-velocity injuries require careful debridement of non-viable soft tissue and non-essential osseous fragments to prevent necrosis and wound infections.13-20 As mentioned earlier, the vast majority of GSWs to the foot involve intra-articular osseous injury. Even low-velocity injuries may require both internal and external percutaneous fixation of fractures to achieve adequate alignment.21 High-velocity injuries are often allowed to heal by secondary intention, while others may require wound closure with myocutaneous flaps, skin grafting or, in extreme cases, amputation.

Until now there has been no large-scale epidemiological examination of the injury characteristics and circumstance of GSWs to the foot. Given the anatomical and biomechanical features of the foot, these GSWs are unique in their presentation, and, while they have been studied on a case-by-case basis,22-24 the overarching trends of self-inflicted GSWs to the foot have not been investigated in a large sample. We undertook a large-scale epidemiological examination of Americans who had shot themselves in the foot.

Using a stratified probability sample of all US hospitals with more than six beds that provide 24-hour accident and emergency services, the National Electronic Injury Surveillance System (NEISS) collected data for the period 1993–2010 as part of the Firearm Injury Surveillance Study. Based on the number of emergency department visits per year, hospitals were stratified as very large, large, medium or small. An additional stratum for children’s hospitals was also used. Between 1993 and 1996, 91 emergency departments were included in the sample. An additional 10 hospitals were added between 1997 and 1999, with two dropouts between 2000 and 2002; 99 hospitals were included in the sampling frame 2002–2010.

NEISS, the primary data collection body for the Consumer Product Safety Commission, was responsible for data collection. Data on initial emergency department visits that resulted from non-fatal firearm-related injuries were extracted from the patients’ medical records.

The characteristics of the patients and the conditions in which each sustained self-inflicted GSWs to the foot were the primary outcomes.

All statistical analysis was conducted in Stata 12 (StataCorp). Participants were identified as either generic firearm victims or patients who had a self-inflicted GSW to the foot. χ2 tests were used to compare the categorical variables of groups; ie, sex, age group, marital status, illicit drug use, involvement in criminal activities, weapon used, location of incident, and diagnosis. Logistic regression was undertaken for sex and marital status (married v not married).

Incidences of shooting oneself in the foot were most common in October, November and December (Box 2).

Contrary to popular belief, incidents of Americans shooting themselves in the foot are relatively rare; the characteristics of these incidents, however, are unique. When these auto-foot shooters were compared with individuals who had sustained other firearm-related injuries, significant differences were noted in the demographic characteristics of the victim/assailant, weapon of choice, the circumstances of the incident, and the nature of the injury itself.

There are several limitations that must be acknowledged in the interpretation of these data. The study included only individuals who presented to US emergency departments with non-fatal firearm-related injuries, so that our comparisons cannot be generalised to the broader population. The primary source of most data was the individual who had shot themselves in the foot; while data about the injury were provided by health care professionals, information about the incident itself may be subject to self-report biases. A social desirability bias may have caused under-reporting of self-inflicted wounds, as individuals who shoot themselves in the foot may not be entirely forthcoming about the nature and cause of their injuries.

Never-married men between the ages of 15 and 34 years were the most common perpetrators of self-inflicted GSWs to the foot. Due to the disproportionate number of males who possess firearms, it is to be expected that the prevalence of these injuries would be higher among men. Of interest, however, was the strength of the relationship between being married and shooting oneself in the foot when compared with the odds of other firearms-related injuries and non-married self-saboteurs. These results are consistent with anecdotal reports from disgruntled spouses and depictions of married men in the mainstream media, such as sitcoms and reality television programs. However, due to the nature of our data, evidence-based generalisations to the broader American population cannot conclusively be made.

Shooting oneself in the foot was extremely uncommon during the commission of a crime or while under the influence of drugs; only five individuals shot themselves in the foot while committing a crime. Given that inhibitions are reduced and cognitive capacity diminished by drug use, it is a somewhat counterintuitive finding that the association of illicit drug use with shooting one’s foot was not stronger. An investigation into the relationship between alcohol use and self-inflicted podiatric injuries is an area for future research, given the ease of access to alcohol and the prevalence of alcohol use in other firearm-related injuries.

There was a strong positive correlation between the month of the year and the number of self-inflicted GSWs to the foot; a disproportionate number of incidents occurred in October, November and December. It is notable that these trends were much stronger than for other firearm-related incidents, with a relatively constant number of these incidents throughout the year.

The epidemiology of firearm-related podiatric trauma has been neglected until now; to our knowledge, ours is the first large-scale epidemiological investigation of GSWs to the foot or of self-inflicted GSWs to the foot. Given the anatomical and biomechanical features of the foot, the nature of the wounds caused by GSWs is unique. A major epidemiological study is required to examine overarching trends in the circumstances and scenarios in which these events occur. Although it may not be possible to prevent Americans from shooting themselves in the foot, large-scale investigations of the nature of these incidents provides invaluable information for those at greatest risk. Particular caution must be taken during the festive season if one is to avoid being caught under the missing toe.

Box 1 – Characteristics of self-inflicted gunshot wounds to the foot

Box 2 – Gunshot wounds in the United States, by month; expressed as a percentage of all foot- or non-foot-related incidents 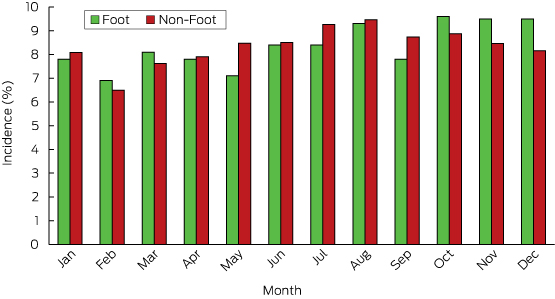 We thank Nicola Batrick for her comments on an earlier draft of this manuscript.