Pancreatic cancer is the 10th most frequently occurring cancer but the fifth most common cause of cancer death in Australia, as is also seen in other developed regions of the world.1 A gradual increase in incidence has been observed since the 1980s in almost all age groups in both sexes in Australia (Box 1).3 Increases have been attributed only to trends in smoking, which is considered causal,4 with local published data suggesting a lag of about 30 years between smoking trends and incidence.5 However, overweight and obesity may also have contributed, in part, to incidence trends.6

In Australia (and other developed countries), only about 50%–70% of cases of pancreatic cancer are histologically confirmed based on review of the primary tumour,1 because pancreatic biopsy procedures have been associated with significant risks7 and are often avoided. But improvements in imaging modalities, particularly endoscopic ultrasound and pancreas-specific computed tomography, and magnetic resonance imaging protocols, together with endoscopically guided biopsy procedures, are likely to have led to some of the increase in incidence through improved detection.

Complete resection of the primary tumour currently offers the only hope of cure. While 5-year survival in those who have local or regional involvement remains low, at 15%–20%, it is significantly better than the 5-year survival of 3% in people with metastatic disease. Thus, increasing the proportion of patients diagnosed with resectable disease from the currently dismal 15% seen in Queensland and New South Wales12 by diagnosing the disease earlier may be beneficial. However, beyond the setting of high-risk families, screening to identify precursor or early invasive lesions is not feasible for two main reasons. First, endoscopic ultrasound is invasive and can only be used in specialised settings, so does not meet criteria for a population screening test. Molecular-based screening may become available in the future, at least partially overcoming this problem. Second, the positive predictive value of screening is limited by the low population prevalence of pancreatic cancer. Attempts to stratify the population using known risk factors, including several known single nucleotide polymorphisms, have not yet identified population subgroups at sufficiently high risk to warrant screening.13

An avenue to optimise outcomes for patients is to ensure that all receive high-quality care in the most appropriate setting. There is evidence from the US that not all patients with potentially resectable tumours are offered surgery.14 Detailed data are not currently available for Australia, but it appears that there is similar underutilisation of surgery here.12,14,15 It is thus important that all patients without metastatic disease are reviewed by a multidisciplinary team in a major centre to determine the resectability of their pancreatic tumours. In addition, resections should be performed in hospitals that carry out a large number of these procedures annually, as this has been shown to improve survival.16

Investment in research to identify cure, beyond surgery, has increased in the past decade. Sequencing of tumour tissue to identify tumour-specific genetic profiles offers the possibility of tailored treatment, with the hope that this will improve survival and avoid unnecessary side effects. In a whole-genome sequencing study of 100 patients with pancreatic cancer, four subtypes with potential clinical utility were identified, and in a subgroup of eight patients receiving platinum-based therapy, four out of five with the “on-genotypes” had exceptional or partial responses, while three patients who did not have these genotypes did not respond.17 Other promising approaches, such as targeting tumours with immunotherapy, are also being explored.18

In conclusion, while the rise in pancreatic cancer incidence in Australia is only slow, as the population ages, more people will be affected with this devastating disease. The burden of pancreatic cancer relative to other cancer types is likely to increase. A multilevel approach is needed to control pancreatic cancer, including reducing the prevalence of risk factors such as smoking and obesity, identifying effective biomarker screening tools and populations in whom screening or early detection might be feasible, discovering new treatment modalities and ensuring that all patients have access to optimal care.

Cumulative age-specific incidence per 100 000 population for cancer of the pancreas in men and women in Australia, 1982–2011* 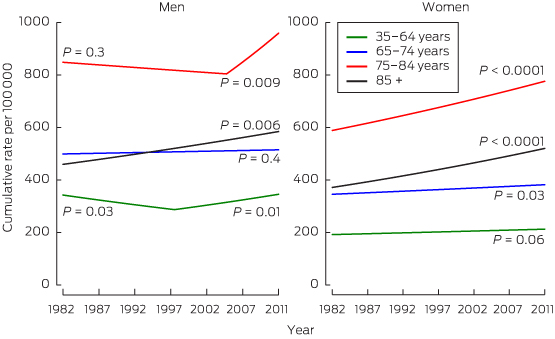 Rachel Neale is funded by a National Health and Medical Research Council fellowship (1060183).