A 34-year-old woman with an implantable cardioverter-defibrillator (ICD) for mitral valve prolapse and non-sustained ventricular tachycardia presented for clinical and device review on a background of intermittent palpitations associated with syncope since the age of 22 years.

At that time, an echocardiogram showed mild left ventricular dysfunction and moderate mitral regurgitation. After careful consideration of the risks and benefits, the patient underwent ICD implantation for primary prevention. A Maximo VR 7232 single chamber ICD (Medtronic) was implanted with a Sprint Quattro Secure 6947 active fixation lead (Medtronic) positioned in the right ventricular apex, and defibrillation threshold testing performed after implantation was successful. Device programming was set to ventricular pacing and sensing mode (VVI mode) with a lower rate of 30 beats/min. Therapy settings were programmed with a ventricular tachycardia monitor zone of 200–250 beats/min and a ventricular fibrillation zone of > 250 beats/min with 35 J shock therapy. On follow-up, device function proved to be normal.

At review, the patient noted that an alarm sound was being emitted from her ICD. She had been well otherwise, with no record of arrhythmic events seen on device interrogation, and no device alerts or alarms. She described a continuous alarm sound (suggesting to us that the device had switched into magnet mode with all tachyarrhythmia detections and therapies turned off) that usually occurred when she was at home. She denied being situated close to any electrical devices or placing her mobile phone near her ICD. Activation of the alarm mainly occurred at night and disappeared when she was having a shower or bath. Further questioning revealed she had recently purchased a new maternity bra, which she predominantly wore at home — in particular, when she was sleeping. She was asked to bring the bra for us to look at and to avoid wearing it in the meantime.

On close examination of the bra, we noted a small magnetic clip (about 1 cm x 1 cm) located on each side of the anterior-facing straps, for ease of breastfeeding (Figure). When the patient wore the bra, one clip was located directly over the ICD in the left subclavicular region and did not vary when she moved. As the magnetic clip was positioned over the ICD, the alarm sounded. The alarm ceased when the clip was moved from this position.

The patient avoided using this bra again, and no further episodes of alarm activation were noted.

Electromagnetic interference is becoming a more frequent hazard for patients with an ICD.1-3 This potential threat usually arises from a relatively obvious or clear source.4,5

The case we report particularly highlights the danger of small powerful magnets that are now used in a wide variety of objects, including clothing.6 It illustrates the inherent danger when a magnet in clothing or underclothing is held firmly in place over an ICD, which should be a cause for concern for the many manufacturers of clothing items that have these for decorative or functional purposes.

Magnetic fields of > 10 gauss appear to be sufficient to inhibit the device.4 Our tests showed that the magnet in question exhibited field strengths of up to 800 gauss (Appendix 1, Appendix 2).

Of particular concern is the lack of manufacturer warnings about magnets in clothing for people who have an implanted cardiac device. Both the underwear manufacturer and Medtronic have been alerted to the potential hazard of permanent electromagnetic interference from such a magnetic clip. Discussion is underway regarding the addition of warning labels to their products. 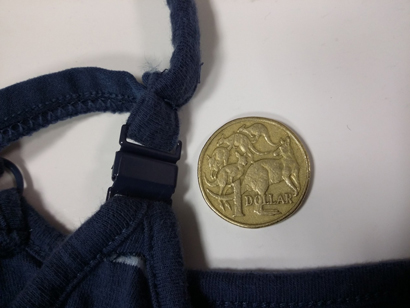 The magnetic clip on the patient's maternity bra (size comparison with an Australian $1 coin).