A 56-year-old man of European ancestry with no clinically significant medical history presented with a 3-day history of periumbilical abdominal pain. He admitted to daily intravenous (IV) misuse of oral extended-release oxycodone hydrochloride (OxyContin; Mundipharma) over a period of months. For the 5 weeks before presentation, he had been injecting the new tamper-resistant formulation because he was unable to access the discontinued crushable form.

On presentation, the patient was afebrile, had a pulse of 95 beats/min, blood pressure of 154/85 mmHg, a respiratory rate of 14 breaths/min and oxygen saturation of 97%. On examination, he had mild periumbilical tenderness. Results of cardiovascular and respiratory examinations were unremarkable. No murmur was detected. There was no injection site infection or axillary lymphadenopathy.

The patient's serological test results for hepatitis B, hepatitis C and HIV were negative. Vitamin B12, folate, lupus anticoagulant, anticardiolipin, anti-β2 glycoprotein I, antinuclear antibody, extractable nuclear antigen and complement levels were normal. His ferritin level was elevated at 442 µg/L (RI, 30–300 µg/L), and transferrin saturation was normal at 18%. Activated partial thromboplastin time and prothrombin time were normal and his fibrinogen level was elevated (5.4 g/L [RI, 1.7–4.5 g/L]). A random urine test showed a proteinuria level of 340 mg/L (RI, < 100 mg/L) and a protein-to-creatinine ratio of 66 g/mol (RI, < 15 g/mol).

We elected to manage the patient's condition conservatively without the use of plasmapheresis, steroids or antiplatelet agents. Spontaneous resolution of the microangiopathic haemolysis followed, and subsequent outpatient review showed that his parameters continued to normalise (Box 2).

To our knowledge, this is the first case of thrombotic microangiopathy (TMA) associated with IV-administered reformulated OxyContin.

Misuse of prescription opioids is an increasing problem in Australia. Morphine, oxycodone and methadone liquid are the most commonly misused prescription opioids, with injection being the route of administration in 75% of misusers.1 In response to these concerns, the National Pharmaceutical Drug Misuse Framework for Action (2012–2015) (http://www.nationaldrugstrategy.gov.au/internet/drugstrategy/Publishing.nsf/content/drug-mu-frm-action) has been developed, outlining various strategies to reduce misuse of pharmaceutical medications.

In April 2014, in response to IV misuse of OxyContin, a new crush-resistant formulation with the intent to deter inappropriate tampering and misuse of the drug was released in Australia, and supply of the old formulation was discontinued. The new tablets, which are embossed with “OP” (the original formulation was embossed with “OC”), are difficult to break, cut, crush or chew, and when added to water, form a viscous hydrogel, which cannot readily pass through a needle.

However, in the United States, where tamper-resistant OxyContin was introduced in August 2010, 24% of misusers reportedly found ways to inject the new formulation.2 Similarly, since its introduction in Australia, misusers presenting to the Sydney Medically Supervised Injection Centre have successfully injected the tamper-resistant formulation.3

TMA is a rare but serious blood disorder characterised by thrombosis in arterioles and capillaries that manifests clinically as a microangiopathic haemolytic anaemia and thrombocytopenia. Types of TMA include thrombotic thrombocytopenic purpura (TTP) or TMA associated with ADAMTS13 deficiency; haemolytic–uraemic syndrome (HUS) or infection-induced TMA; atypical HUS or TMA associated with disorders of complement; drug-induced TMA (Box 3); and TMA associated with other conditions including transplantation, lupus, glomerulopathies and malignant hypertension.4 For patients with TMA, HIV and other active viral infections should also be excluded.

Treatment of TMA varies depending on the cause. Patients with TTP require plasma exchange, whereas HUS treatment is largely supportive. Atypical HUS is treated with plasma exchange and eculizumab, a monoclonal antibody that prevents C5 activation. Of the drug-induced TMAs, only ticlopidine-induced TMA has been shown to respond to plasma exchange. While determining ADAMTS13 levels assists in making a diagnosis, the decision to treat with plasma exchange is usually based on clinical history and other laboratory parameters, owing to the delay in obtaining this result and the necessity to start plasma exchange promptly.

In contrast to our case of OxyContin-associated TMA, acute kidney injury requiring haemodialysis was a prominent feature among patients injecting reformulated Opana ER.8 Our patient had a somewhat atypical presentation, with normal serum creatinine levels, minor proteinuria and no definitive evidence of other end-organ damage.

It is unclear what components of tamper-resistant OxyContin or Opana ER might trigger TMA and whether different methods of preparation can increase or decrease this risk. The new formulation of OxyContin contains inactive ingredients not found in the original formulation, including polyethylene oxide (PEO), butylated hydroxytoluene and magnesium stearate. Opana ER also contains PEO, and notably, in one study, rats intravenously injected with PEO subsequently became thrombocytopenic.11 Interaction with other prescription or illicit drugs is also a possibility. Our patient was taking sertraline 200 mg once daily and diazepam 5 mg as needed, and admitted to chronic daily marijuana use but denied any other substance misuse or medications.

Given the recent switch to tamper-resistant OxyContin in Australia, further cases of OxyContin-associated TMA may occur. A high degree of clinical suspicion is required to make this diagnosis, and we recommend that all patients presenting with TMA be questioned about the use of IV drugs. If OxyContin misuse is acknowledged, clinicians should consider conservative management, which avoids the morbidity and costs associated with plasma exchange. 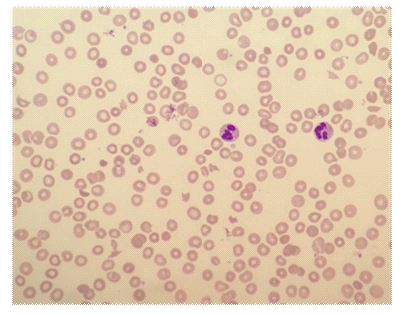 2 Improvement in parameters throughout conservative management of thrombotic microangiopathy

3 Drugs that may induce thrombotic microangiopathy