The rise of targeted HIV oral rapid testing in Australia

Objective: To assess the performance and acceptability of the OraQuick Advance Rapid HIV-1/2 Antibody Test (ORT) in Australia.

Design, participants and setting: Cross-sectional study of 1074 men who have sex with men (MSM) and individuals aged 18 years or older at high risk of acquiring HIV infection who attended five public HIV or sexual health services, two general practices and one community clinic in Sydney from 1 January to 31 December 2013.

Main outcome measures: ORT sensitivity and specificity compared with EIA; acceptabiity of the ORT to participants.

Conclusion: ORT sensitivity is reduced in early HIV infection. The test is highly acceptable and less stressful than venous sampling. Participants are keen to be tested with the ORT in future, would recommend it to peers and would have tests more frequently if the ORT were licensed. TGA approval of this test might slow increasing HIV infection rates among MSM and others by facilitating diagnosis and treatment.

General awareness of HIV in Australia has declined since the mid 1980s when the “Grim Reaper” campaign depicted the threat of AIDS to everyday Australians. This is due largely to antiretroviral therapy, which has improved quality of life and reduced mortality among people with AIDS; but the incidence of HIV in Australia has steadily increased since the nadir of 724 infections in 1999, to a 15-year high of 1236 cases in 2013.1 This increase has happened despite 90% uptake of antiretroviral therapy among patients with HIV,1 more of them attaining undetectable viral load (58% in 2004 compared with 88% in 2013)1 and ongoing prevention efforts (safer sex promotion, testing campaigns, post-exposure prophylaxis).

Men who have sex with men (MSM) continue to account for most diagnoses (85%) of newly acquired HIV infection (ie, acquired in the past 12 months).1 A multidimensional approach — including promotion of safer behaviour, increased HIV testing, early diagnosis, antiretroviral therapy and biomedical prevention — is called for. Australia's Seventh national HIV strategy 2014–2017 aims to reduce the national incidence of HIV infection by 50% by 2015.2

The NSW HIV strategy 2012–2015 aims to reduce HIV transmission among MSM by 60% by 2015 and 80% by 2020.4 Increasing the amount of testing is a cornerstone of this strategy; but individuals may elect not to test. Reasons for this include perceiving themselves to be at low risk, fear of a positive result, stress associated with waiting for a result, general reluctance to attend health services, reluctance to re-attend health services to receive results (positive or negative) and fear of venepuncture or generalised discomfort with needles.5,6 The stigma of having HIV itself is another reason.7

Such barriers to being tested may be overcome by the use of HIV rapid tests that are reliable (sensitive and specific), efficient (render results quickly) and acceptable to the individuals being tested. However, it is important to remember that rapid tests are screening tests and do not replace diagnostic serological tests.

At the time of writing, the Alere Determine HIV 1/2 Ag/Ab Combo test (Alere Pty Ltd), requiring a finger-prick blood sample, was the only HIV rapid test approved by Australia's Therapeutic Goods Administration (TGA). The manufacturer lists the sensitivity and specificity of this test as 100% and 99.66%, respectively.8

The OraQuick Advance Rapid HIV-1/2 Antibody Test (ORT) (OraSure Technologies Inc), requiring an oral fluid sample, is currently being considered by the TGA for approval. The ORT was approved by the United States Food and Drug Administration (FDA) for clinical use in 2004 and for home testing in 2012. Serological testing is recommended to confirm reactive results of this test. The manufacturer lists the sensitivity and specificity of the ORT as 99.3% and 99.8%, respectively.9

Here, we report the first large-scale Australian study assessing the performance of the ORT compared with standard serological testing (enzyme immunoassay; EIA) in the clinical setting, and its acceptability to individuals at high risk of HIV infection.

Between 1 January and 31 December 2013, we conducted a cross-sectional study in eight NSW sites with high MSM caseloads (five public HIV or sexual health services, two general practices and one community clinic). Eligible participants were aged 18 years or older, consented to testing with one ORT plus a confirmatory fourth-generation EIA (either an Elecsys HIV Combi PT [Roche Diagnostics] or Architect HIV Ag/Ab Combo [Abbott Diagnostics] assay, depending on the local laboratory).

Before being tested, participants were surveyed for risk history, demographics and their “usual” frequency of HIV testing. Site investigators or trained staff conducted one ORT as per the manufacturer's instructions. The two-step process involved sweeping the test swab across participants' upper and lower gum lines and submerging it in a developer solution vial; this yielded an HIV-1/2 antibody result in 20 minutes (minimum).

Each ORT was interpreted by two staff members and results were reported as reactive, non-reactive or invalid (Box 1). A second ORT was performed for invalid tests (invalid in this context is not synonymous with “indeterminate”, as in evolving western blots). After the test, participants with non-reactive results were surveyed about how stressful they found the testing process and whether they would have an ORT in the future or recommend this test to their peers. They were not asked whether having to pay for the test would affect their desire to be tested again, recommend the test or be tested more frequently. Participants with reactive test results were not surveyed and received immediate counselling and expedited medical review. All ORT results were confirmed by the study site laboratory using the available EIA, with results available in 1 to 5 days. Data were analysed using SPSS version 20 (SPSS Inc).

Box 3 shows that, overall, there were 11 true-positive results (10 MSM and one heterosexual man — all had been tested before), two false non-reactive results (early infections — non-reactive on ORT, negative result on EIA HIV-1/2 antibody test, positive for p24 antigen, indeterminate on western blot) and one false-positive result (due to reader error). The sensitivity and specificity of the test were 84.6% and 99.8%, respectively. Results did not differ by age, sexual orientation, number of sexual partners, or testing frequency.

Not all participants answered all questions about ORT acceptability. Of those who completed the survey:

We consider our study population as broadly representative of urban MSM and individuals at high risk of acquiring HIV infection in Australia. The ORT is a potential alternative HIV rapid test to the Alere Determine HIV 1/2 Ag/Ab Combo test. As stated earlier, both tests have high (and similar) sensitivity and specificity under clinical trial conditions.8,9 However, in actual clinical use, they perform less well. In our study, ORT sensitivity and specificity were 84.6% and 99.8%, respectively. This compares to a clinical trial of 3190 Alere Determine tests and parallel serological tests in MSM who were offered one or more tests in Sydney, in which the sensitivity and specificity were 87.2% (94.4% for antibody, 0% for antigen, contributing 33% of false-positive results) and 99.4%, respectively.11 Overall, both tests perform similarly under clinical trial conditions and in clinical use, and both are portable and yield results in about 20 minutes.

The ORT does, however, have a potential limitation in that its sensitivity may be reduced in two contexts.

Reader error: In a study submitted to the US FDA Blood Products Advisory Committee before its approval of the home-testing kit in 2012, 5499 untrained individuals collected their own samples and interpreted their test results at home as if they had purchased the kit over the counter,12 revealing a test sensitivity of 92% (compared with the ORT sensitivity of 99.3% listed by the manufacturer9) while the specificity was 99.8% (the same as listed for the ORT by the manufacturer9). The low sensitivity shown in that study may cause confusion and requires explanation. A sensitivity analysis of 114 participants was conducted, of whom 106 returned true-positive results (ie, ORT reactive, positive confirmatory serological test result), but eight incorrectly reported non-reactive results when the serological test result was positive. Thus, the sensitivity was 92.0% (106/114; 95% CI, 86.6%–96.9%).12 As reader error can lower ORT sensitivity, it is important to confirm negative results with serological tests, especially if seroconversion or early infection is suspected. Note that the sensitivity of the ORT in our study was 84.6% because of the small number of true-positive results confirmed by EIA, not because of reader error. Reader error may be reduced by providing training by experienced staff at the point of sale or point of testing.

Early infection: The ORT only detects HIV-1/2 antibody (which takes 2–4 weeks or more to develop), so early infections (eg, a positive result on an HIV p24 antigen test) may be missed. Such cases are viraemic and highly infectious, and identifying these is crucial to enable consideration of antiretroviral therapy and to prevent HIV disease progression and transmission.

Referring again to the study submitted to the US FDA Blood Products Advisory Committee, one of the eight participants reporting a non-reactive result was seroconverting.12 Similarly, in our study, we identified two asymptomatic MSM as having early infections. Together, the studies highlight the decreased sensitivity during early infection and the need to confirm non-reactive ORT results with serological tests — which underpins our decision to confirm all ORT results (reactive and non-reactive) with EIA.

For the general population at low risk of HIV infection, using serological tests to confirm reactive ORT results only (as recommended by the US FDA) is practical and appropriate. However, for those at high risk, like MSM, we suggest that clinicians consider confirmatory serological tests on a case-by-case basis. A careful history to identify recent exposure (eg, unprotected anal intercourse), symptoms of seroconversion (eg, flu-like illness, rash) and consideration of the “window period” (ie, time for HIV antibody to develop since the last potential exposure) will help inform this decision. In public NSW sexual health services, serological tests are routinely performed for syphilis and hepatitis A, B and C, so requesting a confirmatory HIV antibody test is a simple matter.

The current recommendation for MSM is to have four HIV tests per year.10 Seventy per cent of the participants in our study did not follow this recommendation, and only 20% did. Ten per cent had never been tested for HIV. These findings suggest that more work is required to encourage MSM and individuals with numerous sexual partners or who engage in other high-risk behaviour to test quarterly for HIV.

With the incidence of HIV in Australia at its highest level since 1992, HIV rapid tests such as the ORT can play a key role in early diagnosis, initiation of antiretroviral therapy and preventing transmission, particularly among MSM and individuals at high risk. This will deliver clear individual and public health benefits.

We found that ORT specificity is very high for established infection but that its sensitivity is lower in early HIV infection. Thus, we suggest confirmatory serological tests for MSM and individuals at high risk or those with symptoms of seroconversion.

The ORT is a highly acceptable HIV screening test; our participants reported that they would recommend it to peers and, importantly, test more frequently if the test was approved by the TGA. Compared with the TGA-approved Alere Determine test, the ORT has similar sensitivity and specificity under both clinical trial conditions and in clinical use. However, the ORT has practical advantages that make it suitable for self-testing at home. As is the case in the US, we believe the ORT is an appropriate alternative rapid test to tackle Australia's HIV epidemic.

C◄ indicates the control line and T◄ indicates the HIV-1/2 antibody test line. The control line must be present for the test to be valid. Lines at both C◄ and T◄ indicate a reactive test; lines may vary in intensity but must fall in the centre of each ◄. Reactive test results should be confirmed with a standard HIV test such as enzyme immunoassay. Tests with invalid results should always be repeated.
Reproduced with permission from OraSure Technologies Inc and Integrated Sciences Pty Ltd. 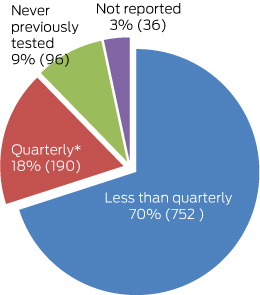 * As per HIV testing guidelines.10