A 45-year-old heterosexual man of European descent presented to our hospital with a 3-day history of fever, myalgia, headache and a macular papular rash. The rash originated on his left shoulder and anterior chest wall before extending to chest, back and abdomen. The rash also involved the palmar aspect of his hands and the plantar aspect of his feet.

He had a background history of dyslipidaemia, excessive alcohol consumption, gastro-oesophageal reflux disease, recurrent pancreatitis and gout. He had been taking statin medications, esomeprazole, allopurinol and creon for several years. There had been no new complementary medicines.

On arrival in hospital, his heart rate was 80 beats/min; respiratory rate, 16 breaths/min; blood pressure, 140/88 mmHg; and his temperature was 37.6°C. Cardiovascular, respiratory and abdominal examinations were otherwise unremarkable. Inguinal lymphadenopathy was noted on examination. A skin examination revealed an extensive macular papular rash affecting his face, trunk and limbs, with an erosion noted on his soft palate.

The patient reported having unprotected sex with one new female partner in the previous 3 months. On advice from the hospital's infectious diseases team, molecular testing for measles and serological testing for syphilis and HIV were performed. The patient was discharged home after 24 hours of observation with investigations pending. The day after discharge, an HIV enzyme immunoassay (EIA) screen was reactive but western blot was negative. The patient was recalled for further HIV testing, which revealed an HIV viral load of 1 060 000 copies/mL.

The patient was reviewed in the hospital's infectious diseases clinic 4 days later and was found to have a persisting generalised pruritic papular rash of urticarial appearance involving his trunk and proximal limbs, including his elbows and knees (Figure 1). Target lesions typical of erythema multiforme (EM) were noted on the plantar aspects of his feet, appearing red and blue centrally, with tense oedema surrounding the pale area and a well defined erythematous peripheral margin (Figure 2). A dermatologist's opinion was sought, who agreed on a diagnosis of EM secondary to acute HIV infection. 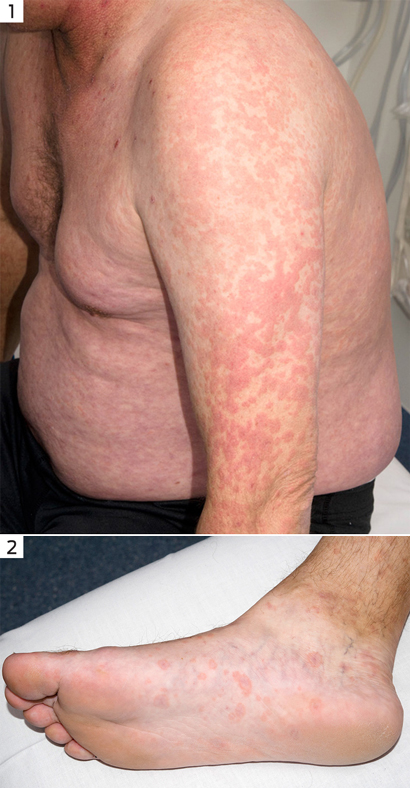 Figure 1. Papular rash on the patient's trunk and arm. Figure 2. Target lesions on the plantar aspects of the feet.

The incidence of EM is unclear, but it is thought to affect less than 1% of the population, with a slight predominance among young women.1 EM is characterised by targetoid lesions distributed in peripheral acral regions, and macular, papular and urticarial patterns peripherally and on the extensor surfaces, and, less frequently, diffusely on the trunk. Oral and genital lesions are generally present. Typical target lesions are most frequently seen in acral locations, especially the dorsal and palmar surfaces of the hands and the dorsal and plantar surfaces of the feet.

Acute HIV infection generally occurs within 4–10 weeks from the time of HIV exposure, with 95% of patients seroconverting within 6 months.2-4 Acute HIV infection is associated with a maculopapular rash in up to 80% of cases, which presents 48–72 hours after the onset of fever and typically affects the upper trunk and neck. Acute HIV is also commonly associated with headache, lymphadenopathy and myalgia.5,6 Vesicular, pustular exanthematous and enanthematous patterns have also been described.7 However, EM in acute HIV infection is considered extremely rare and we are aware of only three reports.5,8,9

The pathogenesis of EM has largely been derived from studies of herpes simplex virus. The mechanism for mucocutaneous lesions is thought to begin with the release of viral DNA into the blood. DNA fragments are phagocytosed by mononuclear CD34+ cells, then transferred to keratinocytes. Expression of herpes simplex virus genes in the epidermis leads a herpes-specific CD4+ Th1 cell-mediated immune response directed against viral antigens and subsequent epidermal damage.10

If oral or genital erosions are noted, serological testing for syphilis should be performed after taking a detailed sexual history. Clinicians should also consider screening for secondary syphilis among patients presenting with a new rash of unknown cause.

Treatment of EM differs depending on the underlying cause and the severity. If drug aetiology (prescribed or non-prescribed) is considered, the suspected medications should be ceased. In cases where an underlying infection is suspected to be the cause, the pathogen should be identified and treated appropriately. A combination of topical steroids and oral antihistamines can provide symptomatic relief for cutaneous EM. Mucosal involvement may require oral anaesthetic and antiseptic solutions with topical corticosteroids. Ocular involvement should be managed in conjunction with an ophthalmologist.

This case highlights the importance of thorough sexual history-taking and clinical examination. Clinicians should suspect acute HIV infection in any patients who present with a new rash and viral prodrome. EM presenting without the typical new drug introduction, or the more frequently associated herpes simplex or M. pneumoniae infections, mandates us to ensure our clinical review includes a detailed sexual history-taking. When a new diagnosis of HIV is detected, the clinician should consider consulting an infectious diseases specialist for ongoing care.