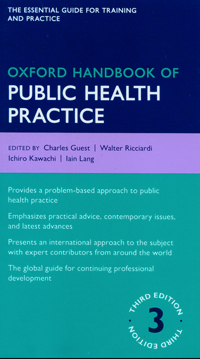 PUBLIC HEALTH practitioners use diverse methods. Although their impact can sometimes be direct (eg, vaccinating school children to stop the spread of measles), many outcomes take a while to emerge. Years might elapse between the formation of a hypothesis about the cause of illness (eg, tobacco smoking) and consequent improvement in the community's health (eg, reduced lung cancer rates), brought about by a suite of public health activities such as surveillance, epidemiology, biostatistics, communication, education, politics, partnership development, legislation, regulation, clinical trials, health promotion and health system financing and management.

The Oxford handbook of public health practice does a good job of explaining the range of these activities. Now in its third edition, the handbook is edited by an international team led by a former ACT Chief Health Officer and includes 60 essays by almost 100 authors. Although written largely from a British viewpoint, there is a fair smattering of Australian content and the occasional American and European example.

Despite its range, the editors have kept true to the handbook ideal, producing something that can be pulled out of your bag for a pithy overview of a subject (“Understanding data …”, “Communicable disease epidemics”, “Developing healthy public policy”, “Knowledge transfer”) on your morning commute. The reader is aided by a broadly standard approach to each essay.

Public health is going through a technological revolution, benefiting from new vaccines, genomics, access to large health databases, data matching and analytical tools, and efficient communications. The new edition addresses many of the emerging issues, although it focuses largely on ways of doing things (such as how to go about investigating an outbreak), rather than the technologies themselves (such as what new vaccines have been developed in recent years).

While it won't make you an expert, the handbook will give you a good sense of the breadth of public health practice, and point you to further resources. It will be useful for students and early career public health workers, a valuable resource for primary care practitioners interested in figuring out what we do, and a handy checklist for us older hacks.