Design, participants and setting: We reanalysed data from five randomised controlled trials of iCBT: two for depression (conducted from September 2008 to February 2009 and from June 2009 to January 2010), two for generalised anxiety disorder (conducted from March 2009 to June 2009 and from July 2009 to January 2010) and one for social phobia (conducted from May 2008 to July 2008). Participants across Australia were recruited via a website. The inclusion criteria were: (i) meets criteria for the disorder of interest; (ii) aged 18 years or over; (iii) no previous history of a psychotic disorder or drug or alcohol misuse; (iv) not actively suicidal. The iCBT courses each consisted of six online lessons (to be completed within 11 weeks), homework assignments, automatic emails and resource documents.

Results: We included 284 participants in our analysis. When data for the three disorders were combined, participants who received iCBT had significant reductions in self-reported absenteeism compared with those in the control groups (who were on a waitlist) (P = 0.03). When data for the three disorders were analysed separately, reductions in self-reported absenteeism for participants who received iCBT were not significantly different to those for participants in the control groups.

Conclusion: Using data from five RCTs, we showed that iCBT was associated with reductions in self-reported absenteeism. Future research should focus on replicating these findings in other contexts, such as other disorders and other iCBT courses.

The Australian Government has invested about $180 million into online mental health and telephone crisis support services,1 and Australian researchers are international leaders in the development of online mental health programs.2 Internet-delivered cognitive behaviour therapy (iCBT) courses are efficacious for anxiety and depressive disorders (the number needed to treat is about two); they significantly reduce symptoms and disability associated with these disorders.2

Depression and anxiety are associated with high levels of occupational disability.3 They are the leading cause of sickness absence in most developed countries and account for about 35% of disability benefits.4 Left untreated, these disorders can lead to significant costs to employers, government, individuals and society.5

We examined data from five randomised controlled trials (RCTs) of anxiety and depression to assess whether completion of iCBT courses results in fewer work days being lost due to illness.

We used data from five RCTs conducted between 2008 and 2010 that established the efficacy of iCBT for depression (two trials, conducted from September 2008 to February 2009 and from June 2009 to January 2010),12,13 generalised anxiety disorder (two trials, conducted from March 2009 to June 2009 and from July 2009 to January 2010)14,15 and social phobia (one trial, conducted from May 2008 to July 2008).16 In each of these trials, participants were specifically asked about days absent from work (self-reported absenteeism). Data on reduced symptoms, presence of disorder and disability have previously been reported from these trials, but data on self-reported absenteeism have not. To ensure sufficient power to compare treatment effects across disorders, data from the two depression trials were combined, as were data from the two generalised anxiety disorder trials.

Participants: Recruitment of participants for the trials was done via a website (https://thiswayup.org.au). Participants completed questionnaires that included questions on severity and chronicity of symptoms and demographic details. Inclusion criteria were the same for the five trials: (i) meets Diagnostic and statistical manual of mental disorders (fourth edition) criteria for the disorder of interest, as determined by the Mini International Neuropsychiatric Interview Version 5.0.0;17 (ii) aged 18 years or over; (iii) no previous history of a psychotic disorder or drug or alcohol misuse; (iv) not actively suicidal, as determined by a risk assessment.

Only those employed in full-time or part-time work were included in our study, owing to concerns about the relevance of self-reported absenteeism among unemployed and casually employed individuals. Other reasons for excluding participants from our study were missing baseline Sheehan Disability Scale scores and missing baseline scores on diagnosis-specific questionnaires.

Interventions: The iCBT courses for depression, generalised anxiety disorder and social phobia each consisted of six online lessons, homework assignments, automated emails containing instructional material and resource documents. Part of the content of each lesson is presented in the form of an illustrated story about an individual who, with the help of a clinical psychologist, learns to gain mastery over his or her symptoms. All six lessons were to be completed within 11 weeks of commencing treatment. Scenes involving the workplace are included in each illustrated story. The control condition for each study was a waitlist period — participants were offered the intervention after 11 weeks had lapsed and the treatment group had completed the course. Comprehensive descriptions of each of the interventions are published elsewhere.12-16

Outcomes: The primary outcome measure was self-reported absenteeism; this was defined as the number of days absent in the previous week and assessed by a question in the Sheehan Disability Scale — “On how many days in the last week did your symptoms cause you to miss work?”18 The questionnaire was administered immediately before treatment and 1 week after the final lesson of treatment.

Statistical analysis: Analyses were conducted using linear mixed-model repeated-measures analysis of variance with time (before v after) as a within-group factor and intervention (treatment v control) as a between-group factor. These analyses were conducted using the linear mixed-effects models (MIXED) procedure in SPSS, Version 19 (IBM), with a random effect for subject. This model was run with several different covariance structures specified on the REPEATED subcommand. Model fit indices and inspection of the variance–covariance matrix supported the specification of a diagonal covariance structure that assumes unequal variances and zero covariances.19 Analyses were conducted separately for the depression, generalised anxiety disorder and social phobia groups, as well as for the three groups combined. Effect sizes based on Cohen's d were also calculated.

A total of 482 participants entered the five trials included in our study (Box 1). Mean age of the 306 participants who were eligible for inclusion in our study was 43 years (range, 18–68 years), and 214 of them (70%) were women. A total of 284 participants from this reduced sample (93%) provided data on absenteeism after completing the relevant iCBT course or after the waitlist period.

Relatively little is known about which interventions affect occupational attendance.20 The large sample size of our study and the RCT methods represent a significant contribution to knowledge in the area of occupational psychiatry.

Our study has some limitations. The outcome measures relied on self-reported data; however, similar self-reported data have been shown to correspond closely with objective measures of work attendance.21,22 Limited demographic data were collected, and the effect of potentially important background and clinical characteristics (such as socioeconomic status, occupation type, and comorbid mental and physical conditions) could not be determined. Despite the use of appropriate analytic methods, missing post-treatment data, while minimal, may have biased the results in unknown ways. We only included iCBT courses from one clinic, and participants were recruited from a website (they may differ clinically from those receiving face-to-face treatment). Finally, use of a waitlist period as the control condition may have led to overestimation of treatment effects.

The importance of considering occupational outcomes of treatment interventions goes beyond economic arguments. Patients want to be fully functional in their occupation and many find that the benefits of work help in their recovery. A recent review concluded that there was insufficient evidence to show that standard interventions for depression (pharmacological and psychological) improve occupational health outcomes in depressed workers.23 Against this background, our findings that iCBT generates significant occupational benefits in addition to reducing symptoms are important. Future research should focus on replicating these findings in other contexts — other disorders, other iCBT courses, and socioeconomic groups outside of Australia should be studied. 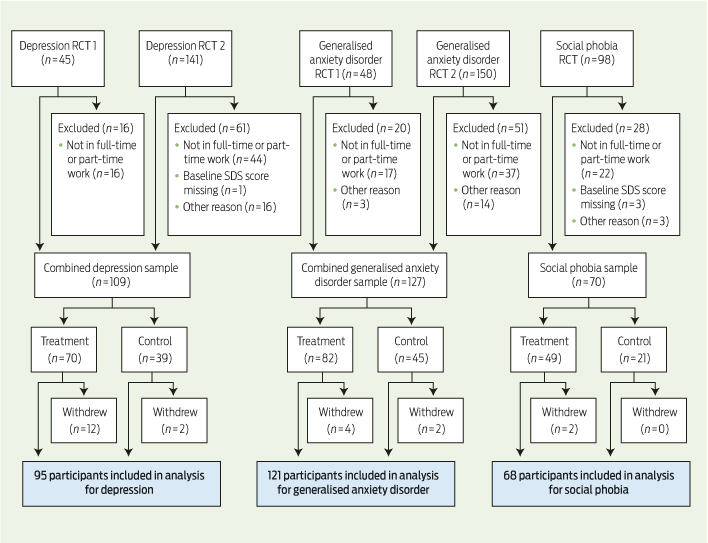 2 Mean work loss days in the previous week before and after an 11-week internet-delivered cognitive behaviour therapy course or an 11-week waitlist period for patients with depression, generalised anxiety disorder and social phobia

We thank the patients for completing the questionnaires and the research and clinical staff at the Clinical Research Unit for Anxiety and Depression who worked on the trials on which this study is based.