David Hill was born in Melbourne on 15 July 1944. When he was 9 years old, his family moved to Mt Gambier, South Australia, where his father was a general practitioner and his mother was the first social worker. As a child, David always intended to be a doctor.

From the age of 11, David attended boarding school at Prince Alfred College in Adelaide, where he was a prefect.

David studied medicine at the University of Adelaide, living at St Mark's College. After graduating in 1969, he was a resident medical officer at the Queen Elizabeth Hospital. He completed a further residency year at the Adelaide Children's Hospital, where he subsequently worked as a paediatric registrar. In 1976, he moved to Dunedin, New Zealand, where he was Senior Paediatric Registrar at Dunedin Hospital and a lecturer with the Department of Paediatrics at the University of Otago.

On returning to Adelaide in 1977, he was Senior Visiting Paediatrician at the Adelaide Children's Hospital, Flinders Medical Centre and Regency Park Centre for Young Disabled. Concurrently, he conducted a private practice in North Adelaide. He also worked as a consultant paediatrician in Mt Gambier from 1987 to 1994.

From 1995 to 2002, he was Director of Paediatrics at Toowoomba Hospital and a visiting specialist to surrounding clinics and hospitals. He returned to Mt Gambier to practise as a consultant paediatrician as well as being a visiting paediatrician to the Millicent and District Hospital from 2002 to 2008.

David had a very active interest in most sports, especially cricket, and was an excellent swimmer — this interest would later be reflected when he served as Honorary Medical Officer to the South Australian Amateur Swimming Association. He was a mascot of Port Adelaide Football Club as a young boy and retained this allegiance for the rest of his life.

He was a much-loved paediatrician because of his gentle and knowledgeable approach. David retired in 2008 but his health suffered. However, he never lost his patience and dry humour. David died from metastatic cancer on 3 July 2014, and is survived by June, his wife of over 40 years, and children Amanda, Amy, Angus and Alistair. 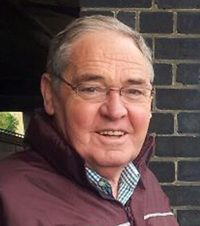