Design: A cross-sectional study of de-identified records from electronic patient systems over 5 years (8 January 2009 to 11 July 2013).

Participants: All patients attending for a clinical visit were included in the study. Hepatitis B testing records were included if at least one serological test for HBV was done.

Conclusion: A substantial proportion of patients tested were susceptible to HBV, with a high percentage potentially infectious compared with the general population. High levels of active infection and susceptibility to infection suggest many opportunities for transmission and indicate the potential benefit of routine HBV testing and vaccination in this population.

Hepatitis B virus (HBV) is an important cause of illness and death in Australia, with up to 218 000 Australians living with chronic infection.1 Aboriginal and Torres Strait Islander people — with rates of chronic infection of 3.7% nationally compared with 0.9% in the general population2 and higher prevalence in remote communities — are recognised as a priority population in Australia's first National Hepatitis B Strategy, endorsed in 2010.3 Aboriginal and Torres Strait Islander people experience a rate of liver cancer up to 10 times that of the non-Indigenous population4 with an overall two-to-threefold increase in the rate of HBV-related liver cancer expected by 2017.3 Although a highly effective vaccine is now available and has been offered universally for newborns since 2000, many of those born before universal vaccination remain susceptible, and are at risk of exposure, primarily through sexual contact, including young adults not reached by adolescent catch-up programs.5-8 While the likelihood of acquiring chronic hepatitis B infection and experiencing long-term complications is far greater when exposure takes place in infancy, exposed adolescents and adults can experience serious acute illness, with a proportion leading to chronicity.9

An important strategy for the control of HBV is targeted testing of people at risk. Recent guidelines recommend that people at risk, including Aboriginal and Torres Strait Islander people, be offered hepatitis B surface antibody (HBsAb), hepatitis B surface antigen (HBsAg), and hepatitis B core antibody (HBcAb) testing. The exception is in pregnancy, where testing for HBsAg only is recommended to detect chronic infection. Screening for all three markers concurrently allows a distinction to be made between the presence of chronic HBV, immunity from vaccination or prior infection, and susceptibility to infection.10,11

This study was a retrospective, cross-sectional analysis of clinical encounter data contained within the medical records of patients attending four ACCHS. Services participated in the project through their involvement in REACCH (Research Excellence in Aboriginal Community-Controlled Health), a collaborative project funded by the National Health and Medical Research Council (NHMRC) and managed jointly by the Kirby Institute and the National Aboriginal Community Controlled Health Organisation. All services are providers of comprehensive primary health care to predominantly Aboriginal and Torres Strait Islander patients.

Data were collected from service patient information management systems through GRHANITE software which extracted specified variables in a de-identified, encrypted format. The accuracy of GRHANITE has been comprehensively assessed by internal reliability checks showing the software correctly classified 100% of pathology test results as positive or negative, and comparisons with external laboratory data, which showed 92%–95% concordance.12 Records of patient visits were included if they related to a clinical visit of a person aged from 15 to 54 years from 8 January 2009 to 11 July 2013. For each patient record, information was extracted on age, sex, Aboriginal and Torres Strait Islander status and HBV testing if completed. HBV serology results were obtained from pathology test data and coded as positive or negative. The number of antenatal patients was derived from clients marked as antenatal in the patient system and with a corresponding visit record. The pattern of hepatitis serology testing was analysed by Aboriginal status, age and sex. Serology results were examined for patients with concurrent testing for HBsAg, HBsAb and HBcAb, and classified according to the United States Centers for Disease Control and Prevention guidelines (Box 1).13 For patients who had these three markers tested concurrently once, only the results of the most recent occasion of testing were included in the analysis. We conducted logistic regression and calculated odds ratios (ORs) examining the relationship between testing outcomes, sex and age. All statistical analyses were conducted using Stata, version 12 (StataCorp).

The analyses reported are of a substantial sample of Aboriginal and Torres Strait Islander people tested for all three hepatitis B serological markers drawn from urban and regional ACCHS, and are the first data of their kind available in this setting. In this study, about 40% of Aboriginal adolescents and adults remain susceptible to HBV infection. Potential infectiousness indicated by a positive HBsAg result was high at nearly 4%, but with significant variation by age (Box 3 and Box 4). The high levels of active infection and susceptibility to HBV infection suggest many opportunities for transmission, primarily through sexual partnerships but also in close household contacts.

These results may not be representative of the clinic population as whole, or the broader Aboriginal and Torres Strait Islander population in the areas served by these clinics, as this only represents a subset of clinic patients. The high rates of acute or chronic HBV infection may reflect selective testing of patients. In this case, the true prevalence of chronic infection in this patient population could be lower than the 3.9% reported. The proportion of positive HBsAg tests of 1.8% in antenatal women may be a more accurate indicator of infection in younger patients.

It is also important to note that a negative HBsAb result, as defined by a titre of < 10 mIU/mL, does not necessarily indicate the absence of vaccination, as titres decline to below this level in up to 50% of people receiving a full course of vaccination after less than a decade.14,15 Protection appears to be maintained for at least two decades after vaccination in healthy individuals who achieved an initial response to vaccine.14 Therefore, a proportion of the study sample defined serologically as “susceptible” may have been vaccinated.

Understanding HBV population prevalence can guide clinical service policy and practice regarding HBV testing, immunisation and health promotion. The retrospective data reported here indicate that a quarter of the patients who had some form of HBV testing had testing in accordance with recent guidelines, a high proportion when compared with previous reports in primary care16 and one that is likely to increase as the guidelines become more widely adopted in clinical practice.

4 Prevalence of hepatitis B virus testing outcomes by age group and sex for 865 Aboriginal and Torres Strait Islander patients tested for HBsAg, HBsAb and HBcAb concurrently 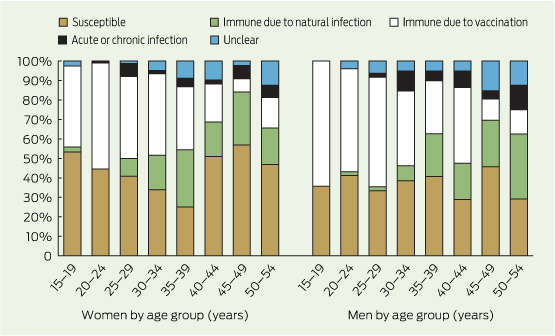 REACCH is a Centre for Research Excellence funded by the NHMRC.