Objective: To investigate the safety, tolerability and efficacy of combination phentermine and topiramate therapy for maintenance of weight loss.

Design, setting and patients: Retrospective audit of patients attending the Austin Health Weight Control Clinic who were dispensed phentermine–topiramate between 22 January 2010 and 16 July 2012 and after reaching a target weight by following a very low energy diet (VLED). Data collection continued until July 2013.

Main outcome measures: Number of patients who ceased pharmacotherapy; duration of use of pharmacotherapy; types and numbers of adverse effects; and mean weight and blood pressure measurements at the initial visit, the end of the VLED and the last observation during pharmacotherapy.

Results: Data were available for 103 patients who were dispensed phentermine–topiramate; 61 patients ceased combination pharmacotherapy before the end of the data collection period, 41 due to adverse effects (eg, paraesthesia, cognitive changes, dry mouth and depression). The mean duration of use of pharmacotherapy was 10 months. Mean weight decreased by 10% due to the VLED (from 135.5 kg to 122.5 kg) and this loss was maintained. For 30 patients who continued on phentermine–topiramate, the mean duration of pharmacotherapy was 22 months and the mean weight decreased by 6.7 kg between the end of the VLED and the last observation during pharmacotherapy.

Conclusion: Phentermine–topiramate therapy was not well tolerated; more than half of the patients in our study stopped taking it because of adverse effects, and more than half of the adverse events reported were ascribed to topiramate. However, in those able to continue with pharmacotherapy, the combination was efficacious for both maintenance of weight loss and ongoing weight loss.

The global obesity epidemic has not spared Australia; 62.8% of adults were classified as obese or overweight in the 2011–12 financial year.1 While bariatric surgery is effective, access is poor for those most in need.2 Calorie restriction diets are successful in inducing weight loss, but weight is usually regained with time owing to hormonal adaptations that increase hunger, which occur in response to weight loss.3 There is a clear role for pharmacotherapy in appetite suppression for maintenance of weight loss.

The US Food and Drug Administration recently approved combination phentermine and controlled-release topiramate (in doses ranging from 3.75 mg phentermine plus 23 mg topiramate to 15 mg phentermine plus 92 mg topiramate) for use in adults with a body mass index (BMI) > 30 kg/m2, or > 27 kg/m2 with at least one weight-related comorbidity. Phentermine is a sympathomimetic agent that induces serotonin, noradrenaline and dopamine reuptake inhibition, suppressing appetite. Topiramate causes weight loss;4 its postulated effects include increasing energy expenditure, decreasing energy efficiency and decreasing caloric intake. In Australia, phentermine is available for use as short-term monotherapy for obesity and topiramate is available for treatment of epilepsy, migraine prophylaxis and treatment of neuropathic pain.

The efficacy of phentermine–topiramate has been assessed in Phase III trials, with a maximal weight loss of 10.9% reported for overweight and obese patients.5-7 The most frequent adverse effects were dry mouth, paraesthesia, constipation and insomnia. Recent studies have shown that phentermine monotherapy is relatively safe; it has no significant effects on blood pressure and heart rate8 and it does not induce psychological dependence or addiction.9

Phentermine–topiramate therapy is used for maintenance of weight loss in selected adults who attend the Austin Health Weight Control Clinic, a tertiary centre obesity service. We aimed to investigate its safety, tolerability and efficacy.

Patients who attend the Austin Health Weight Control Clinic follow a ketogenic very low energy diet (VLED) to suppress hunger10 until they achieve a target weight. They then receive dietary advice on reintroduction of carbohydrates. Selected patients are also offered oral phentermine 15 mg and topiramate 25 mg (a non-controlled release formulation that is taken in the morning) for an indefinite period for maintenance of weight loss. Those who have active ischaemic heart disease or severe hypertension, and those who are concurrently taking antidepressants, are not offered pharmacotherapy. Women of childbearing age are counselled about the teratogenicity of topiramate, which causes cleft lip and palate in the fetus. Patients are seen monthly during the weight loss phase and at the physician's discretion during the weight maintenance phase (usually 3-monthly).

We used the Austin Hospital's pharmacy records to identify patients dispensed phentermine–topiramate between 22 January 2010 and 16 July 2012. Patient data (sex and age; weight, height and blood pressure measurements; and qualitative data regarding potential adverse effects and reasons for ceasing pharmacotherapy) were collected from the Weight Control Clinic's electronic database. Data collection continued until July 2013. Patients who did not attend the clinic for more than 6 months were defined as being lost to follow-up.

The Austin Health Research Ethics Unit approved the study as an audit activity.

During the study period, 125 patients were dispensed phentermine–topiramate. Data for 103 patients were analysed as no data were available for the remainder. Patients were initially severely obese (Box 1), and the mean duration of pharmacotherapy was 10 months (median, 6 months; interquartile range, 13 months). Mean weight decreased by 13.0 kg due to the VLED, a 10% decrease. Mean weights at Time 3 and Time 4 were significantly lower than mean weights at Time 1 (P < 0.001). Using intention-to-treat analysis, mean final weight and mean final BMI (119.9 kg, 42.7 kg/m2) were significantly lower than mean weight at Time 1 and mean BMI at Time 1 (135.5 kg, 48.6 kg/m2), respectively (P < 0.001).

A total of 67 adverse effects were reported among 52 patients, the most frequent being paraesthesia, cognitive changes and depression (adverse effects of topiramate) and headaches, dry mouth and palpitations (adverse effects of phentermine) (Box 2). There was a significant difference in mean systolic blood pressure between Times 1 and 3 (P = 0.02) but no significant differences for mean systolic or diastolic blood pressure between other time points (Box 3).

For the 30 patients who continued on phentermine–topiramate (Box 4), mean duration of pharmacotherapy was 22 months (median, 23 months; interquartile range, 12 months); 26 patients took it for > 12 months and 13 took it for > 24 months. Seven of these 30 patients had adverse events: dysgeusia, dry mouth, paraesthesia, agitation, nausea and, in one patient, initial memory loss. Between Times 1 and 2, mean weight for these patients decreased by 16.0 kg — a 12% decrease. By Time 4, overall, the mean weight decreased by a further 6.7 kg. However, for men, the decrease in weight between Time 2 and Time 4 was not significant. No significant changes were observed in blood pressure measurements for these patients (data not shown).

Limited data were available for patients who ceased phentermine–topiramate therapy. Mean weight at 12–18 months after cessation was not significantly different to weight at the end of the VLED, but was significantly lower than the initial weight. However, this result represents only 28 patients and a short duration of follow-up.

Combination pharmacotherapy with phentermine and topiramate may soon be available in Australia. The results of our study show low tolerability. However, for those who are able to continue phentermine–topiramate, the combination appears to be efficacious not only for maintenance of weight loss but also for ongoing weight loss.

1 Characteristics of the total cohort, reported as mean (SD) 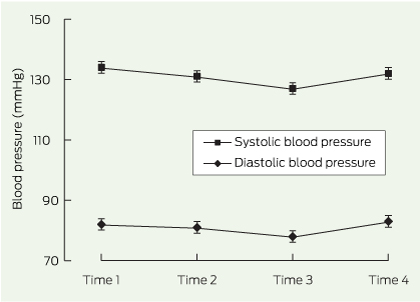 4 Characteristics of patients who were on pharmacotherapy until the end of the data collection period, reported as mean (SD) 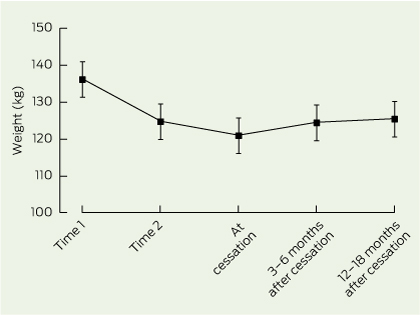