All that is irregular is not AF!

A 64-year-old man with no significant past medical history presented to a district hospital in June 2012 with a 3-week history of palpitations and breathlessness. The electrocardiogram (ECG) showed an irregularly irregular wide complex tachycardia at a rate of 150 beats/min with right bundle branch block-like morphology (Box 1). A transthoracic echocardiogram showed moderate segmental left ventricular dysfunction. Coronary angiography showed no evidence of significant coronary artery disease to account for his left ventricular impairment. A diagnosis of atrial fibrillation (AF) with a rapid ventricular response and tachycardia-mediated cardiomyopathy was made.

Therapy with diuretics and antiarrhythmic medications was commenced. Despite substantial doses of amiodarone (600 mg daily), metoprolol (200 mg daily), verapamil (240 mg daily) and digoxin (250 µg daily) over 2 weeks, his heart rate remained uncontrolled at between 100 and 200 beats/min. A transoesophageal echocardiogram-guided cardioversion was performed, but failed to restore normal rhythm. He was subsequently referred to our tertiary cardiac centre for further management.

The differential diagnoses of broad complex tachycardia include ventricular tachycardia (VT), supraventricular tachycardia with aberrancy and a ventricular paced rhythm. The diagnosis of broad complex tachycardia remains challenging despite various criteria having been established to differentiate VT from supraventricular tachycardia with aberrancy.1,2 The patient's initial presenting electrocardiogram (ECG) was misdiagnosed as atrial fibrillation (AF) because of the irregularly irregular rhythm. In VT, the rhythm is usually regular or almost regular but beat-to-beat variations can occur in the presence of captured beats (when an atrial impulse causes depolarisation via the normal conduction system, resulting in a narrow QRS complex occurring earlier than expected) or fusion beats (when an appropriately timed sinus impulse fuses with the wide QRS complex from VT to produce a relatively narrowed QRS complex). In addition to an irregularly irregular rhythm, however, the diagnosis of AF requires the absence of P waves, and fibrillation of the baseline (f waves); neither feature was evident on the patient's initial ECG.

The absence of an RS complex in any precordial lead during a tachycardia with a wide QRS complex makes the diagnosis of a VT highly specific.5 If an RS complex is present in one or more precordial leads, the next step is to measure the longest RS interval. This is the intrinsic deflection, measured from the onset of the R wave to the deepest part of the S wave, and should be longer in VT (> 100 ms) than in supraventricular tachycardia, irrespective of the QRS morphology.5

In our patient, there was extreme axis deviation (“north-west” axis) during tachycardia with predominantly negative QRS complexes in leads I, II and III (Box 1). A frontal axis between − 90° to ±180° cannot be achieved by any combination of bundle branch block and therefore suggests VT.3 Also QRS duration greater than 160 ms (not applicable in this case) is strongly suggestive of VT.

In general, all broad complex tachycardias should be treated as if the rhythm was VT until proven otherwise. Delay or misdiagnosing VT with an inappropriate treatment can lead to fatal or almost fatal outcomes.6 Twelve-lead electrocardiography remains an important tool in the diagnosis of VT; if there is any doubt, an expert opinion should be obtained to prevent any delay in management.

Traditional understanding held that ventricular arrhythmias are a consequence of an underlying cardiomyopathy. However, more recent evidence shows that frequent premature ventricular beats or sustained VT can precipitate left ventricular impairment in otherwise normal hearts.7 Numerous ventricular foci for these arrhythmias have been reported.7 Although it is uncommon, papillary muscles can give rise to ventricular arrhythmias in normal hearts without previous infarcts.8,9 The mechanism of this VT is postulated to be either due to triggered activity (delayed after depolarisations) or abnormal automaticity (non-re-entrant), which might account for the irregularity of the VT.7,9 Importantly, ventricular dysfunction is reversible with appropriate treatment, and excellent clinical outcomes from radiofrequency catheter ablation for papillary muscle VT have been reported, as was the case in our patient.10 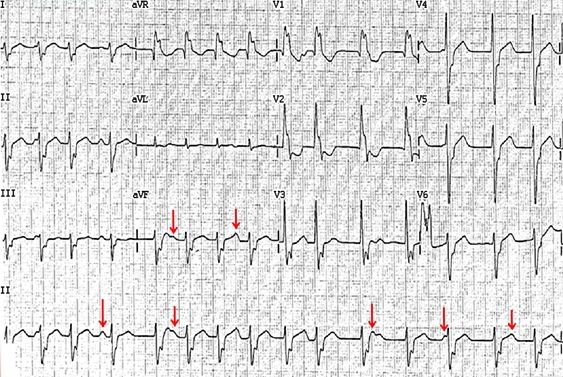 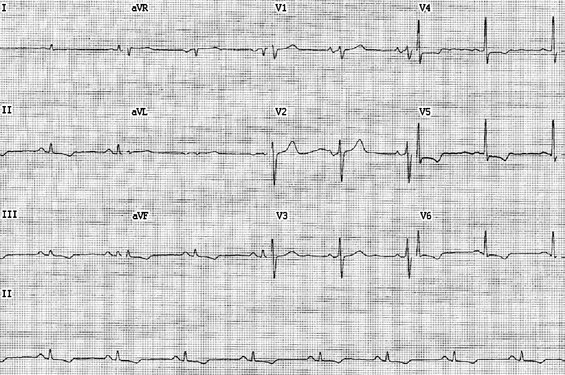