Objective: To estimate influenza vaccine coverage and effectiveness against medically attended laboratory-confirmed influenza for the 2012 season.

Design, setting and participants: Test-negative design involving patients recruited as part of the Australian Sentinel Practices Research Network, a network of sentinel general practitioners throughout Australia. Throughout 2012, at the discretion of the GP at one of 102 participating practices, patients presenting with influenza-like illness were swabbed and included in the study.

Conclusion: Vaccination against influenza was modestly protective, reducing the risk of medical presentation with influenza by around 23%.

The Australian Sentinel Practices Research Network (ASPREN) is a network of sentinel general practitioners run through the Royal Australian College of General Practitioners and the University of Adelaide.1 It has collected de-identified information on influenza-like illness and other conditions seen in general practice across Australia since 1991. ASPREN GPs are distributed based on a target of one GP per Division of General Practice, or one GP per 200 000 population for metropolitan areas and one GP per 50 000 population for rural and remote areas. Previous evaluations of ASPREN suggest that it provides timely data on influenza-like illness (ILI), and rates consistent with those from other surveillance systems.2,3 Since 2009, GPs have collected specimens for influenza testing, allowing estimation of influenza vaccine effectiveness (VE). We estimated influenza vaccine coverage and effectiveness for the 2012 season.

Data were collected throughout 2012. A total of 275 GPs submitted data to ASPREN, of whom 110 submitted swabs. GPs are instructed to swab, at their discretion, roughly 25% of patients presenting with ILI (fever, cough and fatigue) and forward samples to SA Pathology for testing (see Appendix 1 for laboratory methods). GPs also collect demographic data (age, sex) and the year of most recent influenza vaccination. Patients provided written informed consent for a swab sample to be collected and for the results to be used for surveillance purposes. As data were de-identified and obtained in accordance with the National Health Security Act 2007 (Cwlth), human research ethics committee approval was not required.

Differences were compared by odds ratios, the χ2 test for categorical variables and the t test for continuous variables. All P values were two-sided. VE estimates were made using the test-negative design,4-6 where the exposure odds among patients testing positive by reverse transcription real-time polymerase chain reaction for influenza are compared with those for patients testing negative. We estimated crude VE as (1 − OR)*100% using logistic regression. Adjusted estimates controlled for age group (< 5, 5–17, 18–49, 50–64, ≥ 65 years), month of consultation and state or territory (random effect). VE was calculated for the epidemic period in each state or territory. Additionally, VE was estimated excluding patients who were negative for both influenza and non-influenza pathogens (pan-negative), as it has been suggested that this may reduce misascertainment bias due to false-negative influenza tests.7 All analyses were conducted in Stata version 12 (StataCorp).

ASPREN GPs reported consultations for 5195 patients with ILI, of whom 1775 (34%) were swabbed. The earliest influenza cases were identified in New South Wales and Queensland, while Tasmania was the last to report a case (Appendix 2). Three-hundred and sixty-one samples were excluded: one was missing laboratory results; 121 were missing patient vaccination information; and four were missing the patient's date of birth. Patients without vaccination information were younger by 3.7 years (P = 0.04) but had a similar sex distribution to other patients (P = 0.4). Data were plotted to identify the epidemic period (Weeks 10–43 of 2012, see Appendix 2), excluding a further 235 patients. The final sample for VE estimates consisted of 1414 patients, including 593 (42%) who were influenza test-positive (Box 1).

Our study showed low overall adjusted VE of 23% for the 2012 season. However, point estimates were higher against influenza B (53%) and lower against influenza A(not H1) (13%). If we assume, based on antigenic data, that the majority of A(not H1) viruses were A(H3), then it is unsurprising that this estimate was so low. For example, the 2011–12 estimate for A(H3) reported from Europe was 25% (95% CI, − 6% to 47%8), and the United Kingdom estimate was 23% (95% CI, − 10% to 47%9). Suboptimal VE against A(H3) has been partially attributed to poor match of the circulating strains to the vaccine.10-12 Indeed, the limited antigenic data available suggested four out of 10 vaccinated patients had viruses antigenically dissimilar to the vaccine strain. Moreover, the vaccine component for A(H3) was updated for the 2013 southern hemisphere season.13

A somewhat surprising finding of this study was the strong protective effect of the vaccine among older people. During the 2011–12 European season, VE for people ≥ 60 years was 15% (95% CI, − 33% to 46%), while for working-age adults (15–59 years) it was 63% (95% CI, 26% to 82%).8 This is in direct contrast with the estimates reported here of 12% (95% CI, − 22% to 36%) for working-age adults and 67% (95% CI, 23% to 86%) for older people. In Spain, VE has been observed to be high (85%; 95% CI, − 8% to 98%) for older patients presenting within 100 days of vaccination.14 Our data did not indicate earlier presentation after vaccination by older patients compared with younger patients and did not allow us to stratify by time since vaccination. In addition, we did not collect data on the presence of conditions predisposing to severe influenza, such as asthma, obesity and immunocompromising conditions. Failure to adjust for this important confounder15 may have accounted for the unexpected age effects.

Our study was limited by incomplete vaccination data on a number of patients. We were unable to exclude patients on the basis of presenting too soon after vaccination or too late after symptom onset,4,16,17 which may contribute to misclassification bias.

To overcome these limitations in future seasons, we have revised the data collection procedures for ASPREN GPs.

1 Number of consultations by week and influenza status for pooled state and territory data, 2012* 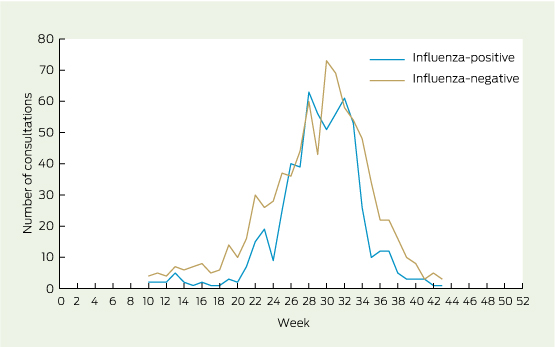 * Data shown include only consultations used in the vaccine effectiveness estimation.

2 Characteristics of patients with an influenza-like illness who were recruited and swabbed by general practitioners in the Australian Sentinel Practices Research Network in 2012,* by state or territory†

3 Estimates of vaccine effectiveness (VE) for 2012

We gratefully acknowledge all practices and GPs who participated in sentinel surveillance. We thank the laboratory staff of SA Pathology and the WHO Collaborating Centre for Reference and Research on Influenza (CCRRI). Thanks also to Daniel Blakeley for data management. ASPREN and the WHO CCRRI are funded by the Australian Government Department of Health.