A history of health and medical research in Australia

Before the 1900s, medical research efforts of Australian scientists were focused on Australian flora, parasitology and bacteriology.1 Early accounts record significant observations made by medical practitioners on unique or emerging diseases that then led to major advances in medical knowledge. Examples include observations on smallpox in the late 1700s, successful smallpox vaccination by John Savage and Thomas Jamison in the early 1800s, and Harry Allen's study of the pathology of syphilis as well as John Thomas's work on hydatid disease in the late 1800s.2

In 1862, the University of Melbourne began teaching its first medical students, followed by the University of Sydney in 1883, and other states and territories over time. At first, most research was done in traditional academic departments but, increasingly, it was carried out in dedicated research centres and institutes.

Australian research in the 20th century

The establishment of the NHMRC in 1936 was arguably the most significant event between the two World Wars for medical research here. The NHMRC was established to better understand and treat the causes of diseases, including “vitamins, viruses, endocrine disorders”.4 In defining the scope of the new Council, the Minister for Health, William Hughes, said “Research must be actively pursued and developed, and as fast as new knowledge is acquired it must be applied”.5 This early recognition that the role of a body such as the NHMRC was to support discovery research and also to work to achieve the benefits of research for the community has remained an important focus for the NHMRC over its almost eight decades and is expressed as a priority action in its current strategic plan.6

From the early days of the 19th century, medical researchers in Australian universities (and then independent institutes and hospitals) have corresponded and collaborated with researchers and health professionals overseas.8 Such collaboration has continued, and the extent of international collaboration has nearly doubled over the past 20 years. In the period 2005–2009, 41% of Australian health and medical research publications involved international collaboration,9 compared with 21% during 1993–1994.10

Australia has had standards and guidelines on research ethics and integrity for over 50 years.

National guidance on general scientific practice and responsibilities began with the NHMRC statement on scientific practice (1990)11 and the Australian Vice-Chancellors' Committee's Guidelines for responsible practice in research and problems of research misconduct (1990).12 The current Australian code for the responsible conduct of research (2007)13 provides extensive guidance on the responsibilities of institutions and researchers when conducting research, and a framework for investigating allegations of research misconduct.

The current National statement on ethical conduct in human research (2007)14 was preceded by numerous guidance materials, initially the NHMRC's Statement on human experimentation issued in 1966.15

The NHMRC first published a code to guide the use of animals in research in 1969,16 and such codes have been revised regularly, most recently in 2013.17

The NHMRC also administers the legislation passed by the Australian Parliament in 2002 (and since amended) on the use of human embryos in research and prohibition of human cloning for reproductive purposes.

Areas of health and medical research

Early research involving Indigenous people was largely observational.8 In October 2002, the NHMRC adopted Indigenous health research as a strategic priority and made a commitment to allocate at least 5% of the medical research endowment account to Indigenous health. Between 1995 and 2013, the NHMRC funded over $410 million in research of relevance to the health of Aboriginal and Torres Strait Islander people.

Research into the health of Aboriginal and Torres Strait Islander people receives particular focus in the NHMRC's consideration of grants, through assessment against the specific criteria of community engagement, benefit, sustainability and transferability, building capability, priority and significance. Further, the NHMRC has published guidance on ethical conduct in Aboriginal and Torres Strait Islander health research.18

Much remains to be done to better ensure that research is conducted with the consent and participation of Indigenous (and other) communities and that the findings from research are used to improve the health of Aboriginal and Torres Strait Islander people.

There are seven Australian-born Nobel laureates in medicine or physiology, five of whom conducted their research wholly or partly in Australia:19

Other Australians who have won a Nobel Prize for research conducted outside Australia include Elizabeth Blackburn (2009) and Howard Florey (1945).

Community support and recognition of health and medical research has been high in recent decades. This is indicated by the number of Australian researchers who have been made Australians of the Year, including Sir Frank Macfarlane Burnet (1960) and Sir John Eccles (1963), and in more recent years, Peter Doherty (1997), Sir Gustav Nossal (2000), Fiona Stanley (2003), Ian Frazer (2006) and Patrick McGorry (2010) — all of whom have been supported in their research careers by NHMRC funding.

Government funding of health and medical research through the NHMRC

From 1937 until 2013, the Australian Government, through the NHMRC, has appropriated an estimated $8.46 billion for health and medical research (adjusted for inflation). In 2013, research expenditure through the NHMRC was $852.9 million, compared with total health funding of $140.2 billion in 2011–2012.24 Some key funding milestones are outlined in Box 2.

Government reviews of Australian health and medical research and of NHMRC funding,25-27 as well as independent reviews commissioned by the NHMRC28-30 in recent years, have recommended and led to improvements to the research framework in Australia.

The NHMRC has been an innovative funder. It has implemented novel research funding approaches in efforts to encourage the faster translation of research into health policy and clinical practice. For example, Centres of Clinical Research Excellence were introduced in the 1990s and expanded to cover public health and health services research excellence in 2010; and Practitioner Fellowships for researchers delivering health care were introduced in 2000. Starting in 2009, the NHMRC's Partnerships for Better Health initiatives introduced two flexible models for policy and practice research, cofunding these with organisations (from the government, non-government and private sectors) that have a need for research to inform their work. Support for early and mid career researchers across biomedical, clinical and population health research has been a feature for a decade, and the NHMRC's longstanding Research Fellowship scheme has been an important factor in growth of the medical research sector over more than three decades.

The NHMRC was also one of the earliest funders to introduce specific criteria for peer review into its grant assessment practices, predating the recent call for this in the San Francisco Declaration on Research Assessment.31

Research in the 21st century and conclusions

The success of Australian researchers in contributing to major advances continues in this century. Already, Australian researchers have led developments in vaccines against human papillomavirus, malaria and group A streptococcus; have developed spray-on skin cells for burns victims; and have led discoveries in genetics (eg, human enhancer sequences in DNA and functions for “junk DNA”).7

Countries with a high-quality health system need an active, involved health and medical research effort. The challenge put by Hughes in 1936 remains — that research must be actively pursued and developed, and as fast as new knowledge is acquired it must be applied.

2 Milestones in government funding and administration of research in Australia through the National Health and Medical Research Council (NHMRC), 1937–2013 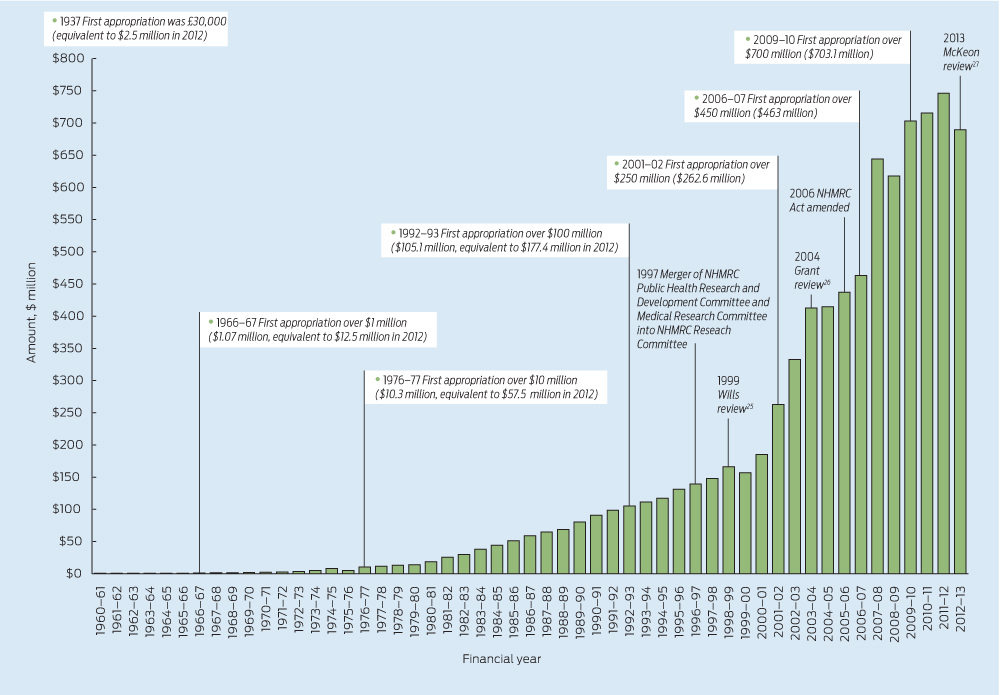 We are both NHMRC employees.