Conclusion: Low rates of EC management by GPs since ECP became available OTC suggest that women may be obtaining information on EC elsewhere. Further investigation is needed to uncover the sources of this information and its acceptability and application by Australian women.

The emergency contraceptive pill (ECP) has been available over the counter (OTC) to Australian women from pharmacies for almost a decade. Yet the rate of unplanned pregnancy remains high,1 and nearly half of all Australian women of reproductive age have experienced an unplanned pregnancy.1 Similar findings have been reported from the United Kingdom,2 the United States3 and Canada.4 This suggests that the potential for emergency contraception (EC) to reduce the rate of unwanted pregnancies is still unrealised.

Australian research shows that although women have a high general awareness of the ECP, they want more information on how to procure and use it, and they prefer to receive this knowledge from their general practitioner.5 However, with the availability of the ECP OTC from 2004 onwards, it is likely that fewer women of reproductive age would consult their GP for EC management. Therefore, the aim of this paper is to determine the extent of the change of EC management in general practice and what implications such change poses for women’s sexual and reproductive health.

Data from the BEACH (Bettering the Evaluation and Care of Health) program, collected between April 2000 and March 2012, were analysed. BEACH is a continuous, paper-based, national study of GP activity in Australia.6 Each year, the 1000 GPs in the national, rolling random sample each provides information on 100 consecutive encounters with consenting, unidentified patients. Each year, the study runs from April to March of the following year. The University of Sydney Human Research Ethics Committee and the Australian Institute of Health and Welfare Ethics Committee have approved BEACH.

We analysed encounters with female patients of reproductive age (defined as age 14–54 years) and examined EC management including ECP prescription, unwanted pregnancy management, procedures undertaken and referrals. Problems managed at encounters were classified according to the International classification of primary care, 2nd edition (ICPC-2)7 and coded to more specific ICPC-2 PLUS terminology.8 EC was defined as including “postcoital contraception” (W10), “fear of pregnancy” (W02) and “unprotected sex, female” (A23011). Unwanted pregnancy was defined as “unwanted pregnancy” (W79) and “induced abortion” (W83).

The BEACH study uses a single-stage cluster design, with a cluster of encounters around each GP. In all analyses, we adjusted for this cluster using survey procedures in SAS (SAS Institute Inc). Statistical significance of differences was determined by non-overlapping 95% confidence intervals. The statistical reliability and validity of BEACH has been established.9

The progressive decline of EC management in general practice since the introduction of the ECP OTC in 2004 suggests that women may be obtaining information on EC elsewhere. These other sources may include the internet or pharmacists when women purchase the ECP OTC. Yet such sources may not necessarily be the preferred source of information. Recent research shows that Australian women prefer to receive knowledge about the ECP from their GP.5

One of the reasons for this preference may be because of the environment in which such information is communicated. Private consultations may be preferred over other more “open” settings and this preference may apply to women and their health providers. Pharmacists, for example, prefer to counsel women on the ECP and other forms of contraception when confidentiality can be assured and in a separate area away from other customers.10 However, large or busy pharmacies may be less conducive environments for such health education to occur.

Other reasons for the decreasing rate of EC management in general practice could be because of better delivery and uptake of other forms of contraception. However, our recent review of contraception prescribing by GPs showed that there was continued use of the combined oral contraceptive pill rather than long-acting reversible contraception, which could suggest an ongoing need for EC as a result of poor adherence to shorter-acting methods.11

In conclusion, it appears that when it comes to EC management there is a mismatch between the desired source of information, the actual source of information and the intermittent way this information is conveyed to women. It still remains unknown where and how women are obtaining information on EC, the credence invested in the information and its application. Neither is it known how GPs can better facilitate EC management and help women make informed decisions about their sexual and reproductive health. Further investigation is required so that women can achieve their desired fertility and health outcomes. 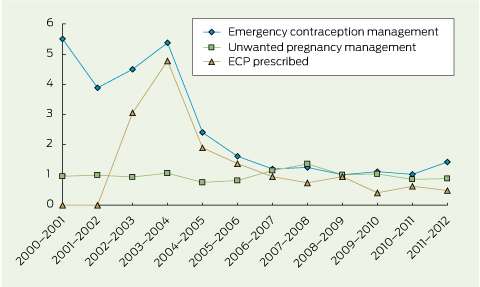