Objective: To examine the effectiveness of airport screening in New South Wales during pandemic (H1N1) 2009 influenza.

Design, setting and participants: Analysis of data collected at clinics held at Sydney Airport, and of all notified cases of influenza A(H1N1)pdm09, between 28 April 2009 and 18 June 2009.

Main outcome measures: Case detection rate per 100 000 passengers screened, sensitivity, positive predictive value and specificity of airport screening. The proportion of all cases in the period detected at airport clinics was compared with the proportion detected in emergency departments and general practice.

Conclusions: Airport screening was ineffective in detecting cases of influenza A(H1N1)pdm09 in NSW. Its future use should be carefully considered against potentially more effective interventions, such as contact tracing in the community.

During the DELAY and CONTAIN phases of pandemic (H1N1) 2009 influenza, New South Wales Health conducted, at the request of the Australian Government, screening of passengers at Sydney Airport. The aim was to delay entry and minimise spread of the pandemic in Australia.1,2 In this study, we examined the effectiveness of this intervention, in order to inform its future use at the state and national level.

On 27 April 2009, two clinics were established at Sydney Airport, staffed by nurses from the local area health service, with public health support from the NSW Ministry of Health. On-board announcements were made before landing, and all incoming international passengers were asked to declare any symptoms or possible contact with a person with influenza A(H1N1)pdm09 by completing a health declaration card. Additionally, thermal imaging scanners with a set point of 38°C ± 2°C were used to detect febrile passengers.3,4

Public health staff triaged and assessed passengers who self-reported symptoms or were detected by thermal scanners according to the case definition current at the time (Box 1). Passengers who met the case definition answered a questionnaire, underwent a brief clinical assessment and had nose and throat swabs taken, which were sent to a pathology laboratory for testing. All demographic, exposure and health assessment data collected at the airport clinics were entered in real time into NetEpi, a national web-based public health data collection system.3,4 NetEpi was also used to collect data for all patients and contacts presenting anywhere with an influenza-like illness, and to assign case status when known.3

As airport clinics were being operationalised, media warnings were issued to the general public asking people with symptoms to call their local doctor and, if required, to go to an emergency department for assessment.3

Data from airport clinics and on all cases of influenza A(H1N1)pdm09 collected between 28 April 2009 and 18 June 2009 and stored in NetEpi had previously been imported into Microsoft Excel. The number screened was estimated on a pro rata basis as the total number of international passengers arriving at Sydney Airport between 28 April 2009 and 18 June 2009, using monthly data from the Bureau of Infrastructure, Transport and Regional Economics.5

Ethics approval was not sought as the study used data collected under the Public Health Act 1991 (NSW).

Across NSW, there was a total of 557 patients with confirmed cases who had samples collected and sent for laboratory testing between 28 April and 18 June 2009. Samples were obtained from patients seen at the airport clinic, emergency departments, general practices and other settings. Of these, 290 (52.1%) were detected at emergency departments and 135 (24.2%) at general practices, compared with three (0.5%) at the airport.

Our analysis shows that airport screening in NSW during pandemic (H1N1) 2009 influenza had low sensitivity, detecting far fewer cases during the DELAY and CONTAIN phases compared with emergency departments or general practitioners. The case detection rate of 0.05 per 10 000 passengers screened reflects figures in reviews of airport screening in other Australian jurisdictions and other countries.6-10 The small number of passengers detected by thermal scanners is also consistent with published estimates of the sensitivity of non-contact infrared thermal image scanners, and the high proportion of influenza infections that are likely to be asymptomatic.11,12

Limitations of the study include possible underestimation of the number of overseas-acquired cases, as milder cases of illness may not have been notified. Also, case definitions used during the DELAY and CONTAIN phases largely sought to detect imported cases and may have underestimated the number of cases acquired in the community. Both factors are likely to further reduce rather than increase the sensitivity of airport screening.

Border screening, including the identification of ill passengers and the use of thermal scanners, was identified in pre-2009 planning as one of a number of control measures that might delay entry of a pandemic into Australia.2 This planning and initial assessment of the likely severity of the pandemic after the emergence of influenza A(H1N1)pdm09 in Mexico led to commencement of airport screening in May 2009. Research also showed that the public were supportive of screening and perceived measures such as thermal scanners to be useful in detecting ill passengers.2

The cost of staffing airport clinics in NSW has been estimated at about $50 000 per case detected (NSW Ministry of Health, unpublished data, 2012). Measures such as in-flight announcements and providing health information at airports may be still be useful mechanisms for raising awareness among incoming passengers during future pandemics. However, given the costs associated with staffing airport clinics, careful consideration should be given to deploying resources to airports for largely ineffective screening measures, compared with other activities such as contact tracing in the community. 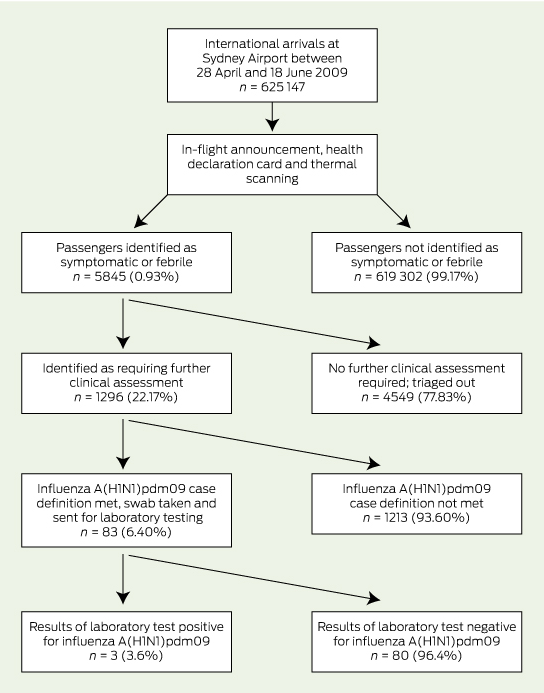 Thanks to Nicola Nel (South East Sydney Local Health District), Paula Spokes and Robin Gilmour (Health Protection NSW) for assistance with data extraction, and Jennie Musto and Robin Gilmour (Health Protection NSW) for review of the paper. Praveena Gunaratnam is employed as a trainee on the NSW Public Health Officer Training Program, funded by the NSW Ministry of Health. She undertook this work while she was based at the Communicable Diseases Branch, NSW Ministry of Health. The Program is offered in partnership with the University of NSW.