To the Editor: Scabies continues to cause significant morbidity among residents of Indigenous communities.1 In the Northern Territory, scabies underlies most cases of Streptococcus pyogenes pyoderma, a major cause of poststreptococcal glomerulonephritis and rheumatic fever.1,2 The increased risk of scabies resulting from infection with the human T-lymphotropic virus type 1 (HTLV-1) has received little attention. This human retrovirus is endemic to much of Western Australia, South Australia and the NT. In a recent study, 33% of nearly 1600 Indigenous adults tested at Alice Springs Hospital (ASH) were infected.3

We report the case of a 36-year-old HTLV-1-infected Indigenous man from an Alice Springs town camp who was admitted to ASH with severe crusted scabies. Since early childhood, he had been hospitalised six times with recurrent scabies and had also been admitted with intestinal strongyloidiasis and chronic suppurative lung disease. On examination, he had confluent areas of hyperkeratosis with profuse skin shedding, deep skin cracks, bleeding and ooze involving the lower half of his body (Box). Skin scrapings revealed numerous scabies mites. Full blood examination showed an eosinophilia (2.6 × 109/L; reference interval [RI], 0–0.4 × 109/L) and markedly elevated IgE levels (177 000 kU/L; RI, < 110 kU/L). HTLV-1 infection was confirmed by western blot at the National Serology Reference Laboratory. The HTLV-1 proviral load was high, at 1.29 per 100 peripheral blood mononuclear cells. High HTLV-1 proviral loads have been associated with strongyloidiasis and HTLV-1-driven inflammatory diseases.4 Serological testing for Strongyloides was negative and no other cause of immunodeficiency was found. Treatment of household contacts and cleaning of accommodation proved difficult due to resource limitations and the number of houses in which he stayed. Three weeks after discharge, a 41-year-old woman with HTLV-1 infection from the same town camp was admitted with typical scabies.

Crusted scabies is considered to be a clinical indicator of HTLV-1 infection in HTLV-1-endemic areas.4,5 As in this case, re-infection and relapse are common, and failure to effectively manage core transmitters results in a cycle of infection that demoralises communities and carries the attendant risks of secondary bacterial infection.1,2 The risks of complications are particularly high in HTLV-1-endemic central Australia, where HTLV-1 infection is also associated with blood stream infections, strongyloidiasis, pulmonary disease, leukaemia, infective dermatitis and myelopathy.3 The growing number of life-threatening sequelae that affect Indigenous Australians with HTLV-1 infection are a compelling reason to urgently implement a program to control HTLV-1 transmission among the Indigenous population of central Australia. 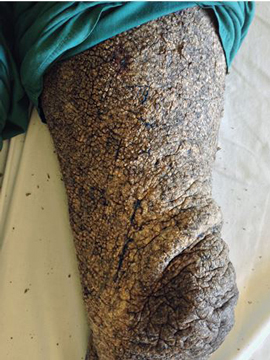 This work was supported by the National Health and Medical Research Council (project grant 1012945) and the Northern Territory Rural Clinical School, an initiative of the Australian Government Department of Health and Ageing.