Objective: To identify areas for improvement in outcomes in retrieved newborns by reviewing newborn retrieval activity and evaluating potentially avoidable retrievals from each referring hospital stratified by the level of service delivery over the study period.

Design: A retrospective analysis of newborn retrievals from 1 January 2006 to 31 December 2009.

Participants: Newborns less than 72 hours old retrieved by NETS in the study period. Each retrieval was classified as potentially avoidable, unavoidable or unclassified, based on predefined criteria.

Newborn infants requiring retrieval for medical care have an increased risk of developing major neonatal complications and possibly long-term neurodevelopmental disabilities compared with those born in a centre that can immediately provide the required level of care.1-6 These increased risks could be ascribed to a difference in access to high-level obstetric care, expert resuscitation and immediate neonatal intensive care. Newborn retrieval separates the mother and infant at birth for a time and creates issues for families that can be difficult to quantify, including the inconvenience secondary to separation and financial pressures. Newborn retrieval is expensive, equivalent to between 1 and 4 days of intensive care, plus ambulance and aircraft costs (Andrew Berry, State Director of the New South Wales Newborn and Paediatric Emergency Transport Service [NETS], personal communication) with additional opportunity costs when teams are not available for other missions.

In Australia, the National Health and Medical Research Council (NHMRC) recommends that births of less than 33 weeks’ completed gestation take place in perinatal centres.7 The NSW Pregnancy and Newborn Services Network (PSN) was established in 1991 to oversee the planning, coordination and regionalisation of perinatal services. The benefits of such strategies have already been shown to reduce births in non-perinatal centres and improve clinical outcomes in extremely premature infants.8 However, whether such a benefit is observed in more mature babies (late preterm and term) is not reported.

In NSW, the roles of public hospitals are delineated according to resources and skills to provide different levels of maternity and newborn services (Appendix).9 There is no such role delineation for private hospitals. If a hospital operates outside its role delineation, it is more likely to need a retrieval service to transfer the newborn to an appropriate facility. Such neonatal retrievals might be avoided if pregnant women are initially transferred to an appropriate facility.

Elective caesarean section before 39 weeks of gestation is associated with increased respiratory morbidity in the newborn.10 In 2007, NSW Health issued a policy directive regarding the gestation at which elective caesarean section becomes safer in terms of reduced neonatal respiratory morbidity.11 Earlier discretionary caesarean has the potential to increase neonatal morbidity and newborn retrieval.

Identifying and categorising potentially avoidable retrievals may identify areas for improvement in perinatal care. The aim of this study was to review newborn retrieval activity (rate per 10 000 births) from each referring hospital stratified by the level of service delivery, and to report on any trends in retrieval activity over time.

NSW NETS is involved in coordinating in-utero transfers (IUTs) (transfers of pregnant women) and ex-utero transfers (transfers of newborns) in high-risk pregnancies. For the purpose of this study, retrievals of newborns aged less than 72 hours were reviewed. This age limit was selected to reflect practices around birth and to exclude transfers conducted for postnatal reasons. Retrospective data on retrievals of newborns from 1 January 2006 to 31 December 2009 were reviewed from the NETS database. Hard copy retrieval records for each infant were also reviewed. These included documentation of the initial telephone conference, medical and nursing retrieval notes, and monitoring and medication charts. Total birth rates for each of the hospitals in NSW were sourced from the NSW Midwives Data Collection for the corresponding years, to correct for changes in overall births at each hospital. Birth rates were not available for any of the years beyond 2009 at the time of the study, so the audit was limited to the period ending on 31 December 2009. The study design was approved by Sydney West Area Health Service Human Research Ethics Committee. Potentially avoidable, unavoidable and unclassified retrievals were defined a priori as follows.

Each retrieval was reviewed by a retrieval consultant and neonatologist and assigned to a category based on consensus. The retrieval rates for each category of retrievals (potentially avoidable, unavoidable and unclassified) and for each level of the referring public hospital Appendix) and for private hospitals were calculated over the study period. The rates were adjusted for live births at each of the hospitals during the study period. Although there is no role delineation guide from NSW Health for private hospitals, they were classified based on their available resources and skills using similar classification to that used with public hospitals. Trends in potentially avoidable retrievals from each of the referring hospitals were reported for the study period. The distributions of the causes in potentially avoidable retrievals were described with the aim of identifying areas for improvement.

NSW NETS provides a statewide advisory and intensive care retrieval service for NSW Health. Some 245 hospitals in NSW and the Australian Capital Territory call on NETS for newborns, infants and children up to the age of 16 years. With decreasing numbers of non-tertiary live births of extremely preterm infants, it is vital to ensure the benefits of not requiring a retrieval are extended to the high-risk late-preterm and term population.8 The most difficult task was to define a priori a potentially avoidable retrieval. This was achieved by consensus and using NSW Health policies around role delineation of health services and timing of caesarean section.9,11

The potentially avoidable retrievals per 10 000 live births reduced by half during the study period despite total retrievals per 10 000 live births increasing over the same time. Level 1–4 public hospitals and private hospitals have limited capability to care for sick newborns and minimal capacity to provide respiratory support. Hence, as expected, level 1–4 public hospitals and the private hospitals were the main sources of requests for newborn retrieval. Level 6 hospitals (children’s hospitals) had no potentially avoidable retrievals, while there were four retrievals over 4 years that were deemed to be potentially avoidable for level 5 hospitals (perinatal centres). These four babies had surgical problems requiring intervention soon after birth. These problems could have been predicted antenatally. The appropriate place of birth would have been a perinatal centre attached to a children’s hospital.

Discretionary caesarean accounted for two-thirds of the avoidable retrievals. Most of these babies required retrieval for need of respiratory support. The increased risk of respiratory morbidity in newborns born by elective caesarean section before 39 weeks of gestation has been repeatedly demonstrated.10,12,13 Our results are consistent with these studies and demonstrate the utility of retrieval services in managing those newborns. The United Kingdom National Institute for Health and Care Excellence guidelines and a NSW Health policy directive in 2007 state that elective or pre-labour caesarean section should not occur before 39 completed weeks of gestation in the absence of compelling medical indications.11,14 The reduction in the avoidable retrievals in the years 2008 and 2009 appears to result from implementation of the policy. This was confirmed by a progressive reduction in newborn retrievals secondary to elective caesarean during the study period (28 in 2006, 20 in 2007, 18 in 2008 and 13 in 2009).

Among the other causes of potentially avoidable retrieval, missed opportunity for IUT stresses the need for early communication with the specialist centres by referring hospitals as soon as the antenatal diagnosis is known. Hospitals operating outside their role is uncommon and mainly involves hospitals delivering babies of gestation just below defined criteria.

There is increasing concern about the neurodevelopmental outcomes for late preterm babies.15 It is important to optimise their outcomes through planned births in facilities that are able to provide an appropriate level of care to the baby at birth, and that adhere strictly to elective caesarean section guidelines. The cost of a potentially avoidable retrieval is difficult to quantify. It not only includes the cost of the retrieval process but also includes the cost of continued stay in the referral centre, back transfer to the referring hospital and financial cost to the family. The inconvenience, lactation and bonding difficulties, and anxiety and uncertainty due to separation of the mother and baby are immeasurable.

The main limitation of the current study is that it was a retrospective audit. The information used to assign categories is based on the information conveyed at the time of referral for retrieval and this could be limited and variable. The study design does not include caesarean section practices in hospitals that are able to manage neonatal morbidities without requiring retrieval. This study is, however, a first attempt to classify retrievals into the described categories. The results of the study have identified important areas for improvement and have vital implications including review of the elective caesarean practices and adherence to role delineation in each referring hospital. The referring hospitals included in this audit will be provided with a copy of this article.

1 Retrievals, live births and retrieval rates over the study period

2 Retrievals, live births and retrieval rates at each level* of referring public hospital and at private hospitals over the study period 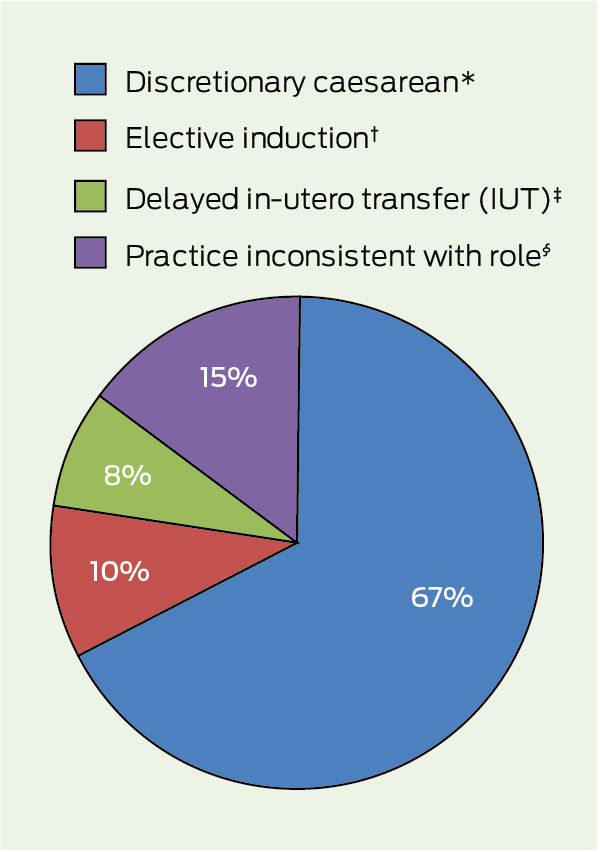