Objectives: To investigate whether the introduction of tobacco plain packaging in Australia from 1 October 2012 was associated with a change in the number of calls to the smoking cessation helpline, Quitline, and to compare this with the impact of the introduction of graphic health warnings from 1 March 2006.

Design and setting: Whole-of-population interrupted time-series analysis in New South Wales and the Australian Capital Territory between 1 March 2005 and October 2006 for the comparator, graphic health warnings, and October 2011 and April 2013 for the intervention of interest, tobacco plain packaging.

Main outcome measure: Weekly number of calls to the Quitline, after adjusting for seasonal trends, anti-tobacco advertising, cigarette costliness and the number of smokers in the community.

Conclusions: There has been a sustained increase in calls to the Quitline after the introduction of tobacco plain packaging. This increase is not attributable to anti-tobacco advertising activity, cigarette price increases nor other identifiable causes. This is an important incremental step in comprehensive tobacco control.

Internationally, Australia is a leader in tobacco control policies that reduce community exposure to tobacco-related harm. In December 2012, Australia became the first country in the world to enact legislation mandating plain packaging for all tobacco products.1 The Tobacco Plain Packaging Act 2011 (Cwlth) is designed to prevent tobacco industry promotion by simultaneously reducing pack attractiveness and increasing the size of graphic health warnings. The legislation required manufacturers to produce plain packs with new warnings from 1 October 2012. From 1 December 2012, plain packaging became compulsory for all tobacco products. The new plain packs are olive green and devoid of brand design. Telephone numbers for the national smoking cessation helpline, Quitline, feature prominently on the packs.

Plain packaging legislation exists to encourage smokers to quit and discourage the uptake of smoking.1 Quitline is a free resource that can be used by smokers who are motivated and seeking support to quit. Therefore, the volume of calls to cessation helplines has frequently been used as one indicator of changes in interest in quitting in response to population-wide cessation policies and programs.2-6

The best level of evidence for evaluating a whole-of-population initiative such as tobacco plain packaging is an interrupted time-series analysis. In exactly the same way in which observational studies have been used to define the association between lung cancer and tobacco (because randomised studies are unethical in such a context), before-and-after evaluation, controlling for secular trends, is the optimal design for assessing the effects of population-wide initiatives.

We used an interrupted time-series analysis to investigate trends in the weekly volume of calls from New South Wales and the Australian Capital Territory to the Quitline.

As plain packs were phased in from 1 October 2012, we considered this date the start of the intervention. Similarly, 1 March 2006 was the date of the introduction of graphic health warnings on cigarette packaging. We looked at Quitline call numbers before and after these dates for the two interventions. Call data from 1 April 2004 to 28 February 2006 were provided by Macquarie Telecom (Sydney, Australia) and from 1 March 2006 to 31 March 2013 by the Telstra Analyser (Telstra, Melbourne, Australia).

This study did not require institutional ethics approval as it did not involve data about individuals. The study received no external funding. Reporting of the study complies with the STROBE (STrengthening the Reporting of OBservational studies in Epidemiology) consensus guidelines for reporting observational studies.9

An increase in anti-smoking advertising in mass media such as television is a potential confounder as it increases the number of calls to the Quitline.2,3,6 We ascertained weekly target audience rating points (TARPs) for advertisements broadcast in NSW and the ACT during the periods of interest, using OzTAM (Australian television audience measurements) for adults aged 18 years and older for free-to-air and cable television using established methods (unpublished report prepared by OzTAM for the Cancer Institute NSW). TARPs are a product of the percentage of the target audience exposed to an advertisement (reach) and the average number of times a target audience member would be exposed (frequency), adjusted for the length of the advertisement. For example, 200 TARPs might represent 100% of the target audience receiving the message twice on average over a specified period, or 50% reached four times.

Finally, the number of smokers in the community can be a potential confounder. We obtained data on smoking prevalence during the study periods from Health Statistics New South Wales,12 and this was applied to quarterly figures for population size from the Australian Bureau of Statistics13 to calculate the number of smokers in the community. Data for the first quarter of 2012 were not available, so we used results carried forward from the final quarter of 2011.

As the data for weekly number of calls to the Quitline were autocorrelated (each value was correlated with the previous value) we used autoregressive integrated moving average (ARIMA) analysis in SAS version 9.3 (SAS Institute Inc). ARIMA models enable the investigation of changes over time while accounting for seasonal variation and background trends in such things as the effects of television anti-tobacco advertising, changes in cigarette pricing relative to weekly earnings and number of smokers in the community. In ARIMA modelling, comprising model investigation, estimation and diagnostic checking, we followed the methods of Box et al (Appendix).14

A single model fitted to the entire 7-year period of Quitline call data did not meet technical criteria for model fit. Therefore, separate models that included data for 12 months before and 6 months after each intervention (1 March 2005 to 1 September 2006 and 1 October 2011 to 1 April 2013) were fitted, as this was the longest duration of follow-up for tobacco plain packaging available at the time of the study.

The same modelling approach was used for fitting models to both data subsets. Indicator terms were created to represent the week of the introduction of the intervention (plain packaging or graphic health warnings). A seasonal New Year’s Eve term was created to allow for an increase in calls around the New Year period. The potential confounders of seasonal variation (New Years’ peaks), anti-smoking advertising activity (TARPs) and number of smokers in the population were included in the models and were retained regardless of statistical significance on the basis of face validity. Cigarette price was included in the plain packaging analysis, but was omitted from the graphic health warnings analysis as there was minimal change in price during the observation period.

Based on the estimated regression parameters from the ARIMA models (Box 3), the plain packaging intervention resulted in an increase of 288 calls (95% CI, 160–517 calls) to the NSW Quitline, representing a 78% increase from the number of calls in the week the plain packaging legislation was introduced (Box 1). This effect was sustained in subsequent weeks, with an estimated 86% of extra calls retained relative to the previous week (Box 1). As a comparison, the introduction of graphic health warnings increased the number of calls by 763 (95% CI, 473–1053), an estimated increase of 84% relative to the number of calls in the week graphic health warnings legislation was implemented (Box 1). The effect of graphic health warnings diminished more quickly, with each post-peak week retaining only 40% of the previous week’s extra calls (Box 1).

We found a significant increase in the number of calls to Quitline coinciding with the introduction of mandatory plain packaging of tobacco after other known confounders had been taken into account. Australia has taken a lead on mandating plain packaging, now supported by evidence of an immediate impact of this legislation. This should encourage other countries that are preparing similar legislation.

We also found that, compared with the introduction of an earlier smoking cessation initiative — graphic health warnings — the effect of plain packaging had a more immediate effect, a slightly smaller peak and a much longer duration of impact.

These changes need to be interpreted in the context of the earlier introduction of graphic health warnings and a raft of other legislated tobacco control policies, and secular trends in smoking rates. It is possible that the magnitude and duration of effect could be different in countries that are implementing aspects of the Framework Convention on Tobacco Control in different ways or different orders.15 For example, in NSW, the most recently legislated changes include the widespread introduction of smoke-free public spaces from 2007,16,17 and banning the display of tobacco products at the point of sale in 2010.18,19 Furthermore, smoking prevalence has declined markedly from 17.7% of NSW residents reporting daily or occasional smoking in 2006 to 14.7% in 2011.12

A key strength of this study was the ability to account for other known influences on quitting behaviour and use of the Quitline:

Although the volume of calls to the Quitline is an indirect measure of quitting intentions and behaviour, it does provide an objective outcome measure that is not subject to selection or social desirability biases that may occur in community surveys. Quitline data are available almost in real time so that the immediate impact of community-wide programs or policies can be evaluated soon after implementation. Interrupted time-series analysis provides one of the most robust methods of evaluating the impact of programs and policies that affect the whole population.20 We examined legislation enacted nationally simultaneously, precluding the use of a control group.

A weakness of our study is its inability to differentiate the impact of the increased size of graphic health warnings that happened simultaneously with tobacco plain packaging from the impact of plain packaging itself. Quitline calls are one measure of changes in people’s behaviour in response to legislative change. The rate of calls to Quitline may have been confounded by the Quitline telephone number appearing to be more prominent in the absence of proprietary branding. Also, our study has shown an association but cannot prove causation.

Longer-term investigation of the impact of the legislation should include assessment of more direct measures:

This would include the need to investigate variations in impact on subgroups of the population. A comprehensive evaluation of the policy will require ongoing monitoring to assess factors such as changes in brand recognition, awareness of the health risks of smoking, the social acceptability of smoking as well as smoking prevalence.21

In conclusion, we showed a significant increase in the number of calls to the Quitline that coincided with the introduction of plain packaging nationally in Australia. Future evaluations of other smoking-related outcomes need to include the impact on smoking prevalence.

2 Weekly calls to Quitline, target audience rating points (TARPs) and cigarette price relative to income, before and after the introduction of plain tobacco packaging and graphic health warnings 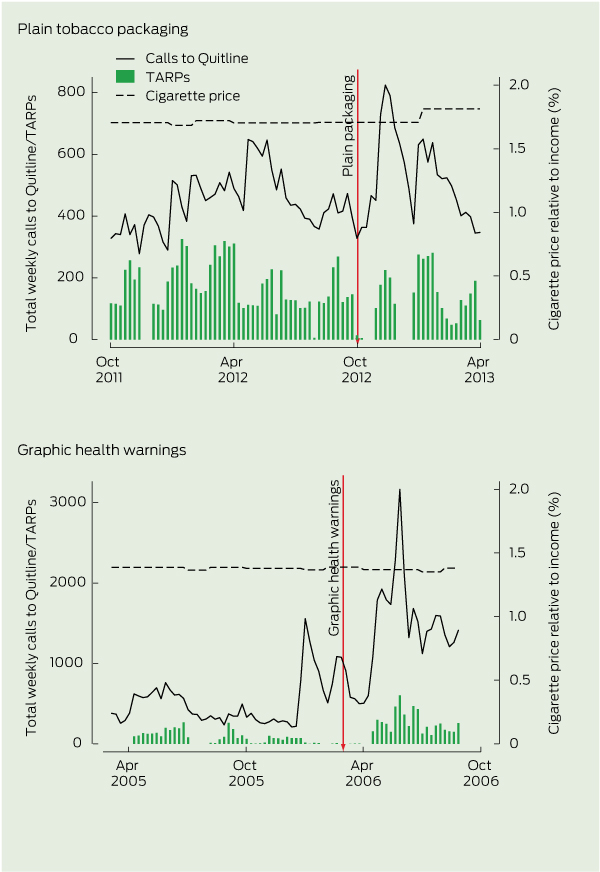 3 Change in numbers of call to Quitline after the introduction of plain packaging and graphic health warnings, adjusted for anti-tobacco advertising, seasonal trend, smoking prevalence and tobacco costliness*

We thank Donna Perez and James Kite for help with obtaining the data. This study was internally funded by the Cancer Institute NSW. Thanks also to Bruce Armstrong, Sanchia Aranda, and Rebecca Kenyon for their helpful comments on the manuscript.