Australia is continuing to make progress against cancer, but the regional and remote disadvantage remains

Objective: To measure progress, over the past decade, in reducing the disadvantage in cancer death rates among people living in regional and remote areas of Australia.

Setting: Population-based, Australia-wide comparison of mortality rates in regional and remote areas compared with metropolitan areas from 1 January 2001 to 31 December 2010.

Conclusions: The regional and remote disadvantage for cancer deaths has been recognised as a problem for more than two decades, yet we have made little progress. This is not surprising — we have not invested in research into solutions. The benefits of laboratory and clinical research to identify innovative cancer treatments will not be fully realised across the entire Australian population unless we also invest in health systems and policy research.

In Australia, as in other high-income countries, mortality rates from cancer have been decreasing since the 1990s.1 This is largely the result of declining smoking rates in men, combined with earlier diagnosis and better treatment across a range of cancer types for both men and women.2

Despite overall progress, disparities for defined groups can persist or even increase.3 Historically, a well known disparity in Australia has been the higher cancer death rates among the 6 million people (27% of the Australian population) who live in regional and remote areas (non-metropolitan cities and towns plus rural and remote localities).4 Our aim was to assess whether the disadvantage in cancer deaths rates among regional and remote Australians has reduced over the past decade (from 1 January 2001 to 31 December 2010).

The Australian Bureau of Statistics (ABS) provided data on cancer deaths and estimated resident populations by 5-year age groups and sex. The death data comprised numbers for all cancers combined, as well as for seven common causes of cancer death: lung cancer, colorectal cancer, breast cancer, prostate cancer, melanoma, oesophageal cancer and pancreatic cancer. A cancer death was defined as one for which the underlying cause of death was documented on the death certificate as cancer. Usual residence was classified as “metropolitan” or “regional and remote” based on the ABS Australian Standard Geographic Classification (ASGC).5 More specifically, “metropolitan” residence was defined as residence in one of the following cities: Sydney or Newcastle, New South Wales; Melbourne or Geelong, Victoria; Brisbane or Gold Coast, Queensland; Perth, Western Australia; Adelaide, South Australia; Hobart, Tasmania; Canberra, Australian Capital Territory and Darwin, Northern Territory. All remaining areas were categorised as “regional and remote”.

We calculated two arithmetic measures: the number of cancer deaths averted across all of Australia and excess cancer deaths in regional areas.

Estimates of the APC, overall and separately for metropolitan and regional and remote areas, were calculated using Poisson regression models with the year fitted as a linear term and 5-year age groups fitted as indicator variables.

SMRs for three separate time periods (1997–2000, 2001–2005 and 2006–2010) were calculated by applying age- and sex-specific death rates for the metropolitan population for the relevant time period to the age- and sex-specific populations in regional and remote areas. Confidence intervals for all measures were obtained under the assumption that observed numbers of deaths follow a Poisson distribution.

Causes of excess cancer deaths in regional and remote Australia

These can be divided into upstream and downstream factors.6-8 Upstream factors include higher proportions of Indigenous people and greater economic disadvantage associated with some regional and remote locations. Downstream factors include a higher prevalence of cancer risk factors, such as smoking, sun exposure and obesity, less cancer screening, delays in seeking medical attention or delays in diagnosis, higher prevalence of co-morbid conditions, and treatment disparities. Upstream factors mainly exert their effect on mortality through downstream factors, although they can also exert an independent effect; for example, Indigenous cancer patients might have specific difficulties in navigating the health system or in coming to terms with the risks and benefits of cancer treatment.9

Our analyses showed that there were 750 excess deaths due to colorectal cancer. Contributing factors could include less screening with faecal occult blood tests or colonoscopies, resulting in later diagnosis, or higher prevalence of risk factors such as obesity. A further factor could be that metropolitan patients are more likely to be treated in high-volume specialist centres, which have been shown both in Australia10 and overseas11,12 to reduce short-term and long-term mortality after complex cancer surgery. Differential rates of chemotherapy use might also play a role.13 Volume–outcome associations might also be contributing to the 842 excess deaths for oesophageal cancer.

Notably there were no excess deaths for breast cancer. This shows that the problem is not intractable: organisation of diagnosis and treatment services for breast cancer might serve as a learning model for other types of cancers.

We posit that at least part of the reason for the lack of progress is the lack of investment in research about the clinical effectiveness and cost-effectiveness of possible solutions to diagnosis and treatment disparities (health systems and policy research).14

Some will argue that before evaluating possible solutions, an understanding of all the interacting causes is needed. We disagree — enough is already known about the causes of the regional and remote excess to start evaluating possible solutions. More specifically, it is clear that an important proportion of the excess is the result of disparities in diagnosis and treatment.6-8 Further, if choices have to be made about how to allocate finite research funds, then research to evaluate possible solutions should be given priority over research to further unpack putative causes.

More investment in health systems and policy research is needed, because the currently available evidence that these possible solutions can produce health gains is thin.14 For example, the only evidence about the effectiveness of regional cancer centres shows that if capacity is increased, patients (who would have otherwise had to travel for treatment) receive treatment locally.7 This surrogate outcome does not provide convincing evidence about the effect of regional cancer centres on quality of life or survival, and we do not know whether regional cancer centres are a more cost-effective way of achieving health gains than, for example, increasing funding for patient travel and accommodation.

More generally, there is no evidence to guide public investment in solutions to diagnosis and treatment disparities, because we have underinvested in health systems and policy research15 (as have other countries16). Evidence synthesis and economic decision analysis are not possible because there is no evidence to synthetise. In 2010, the federal government announced an investment of $560 million over 5 years in regional cancer centres.17 This will hopefully result in significant health gains. However, an important contrast is that, for a new cancer pharmaceutical, convincing evidence is required of both comparative clinical effectiveness and comparative cost-effectiveness, before the pharmaceutical can be subsidised with taxpayer dollars. Hence, investment is needed, not only in actual evaluations of health systems and policy interventions, but also in the development of appropriate methods of evaluation.18

The regional and remote excess of cancer deaths has been recognised as a problem for at least two decades.19 Yet we have made little progress. Research to guide service planning and budget decisions is not as prestigious as laboratory and clinical research to identify and test innovative diagnostic tests and treatments for cancer. However, such research is needed if all of the Australian community are to benefit from laboratory and clinical advances.

2 Excess deaths in regional and remote areas, and cancer deaths averted in Australia overall, from 2001 to 2010 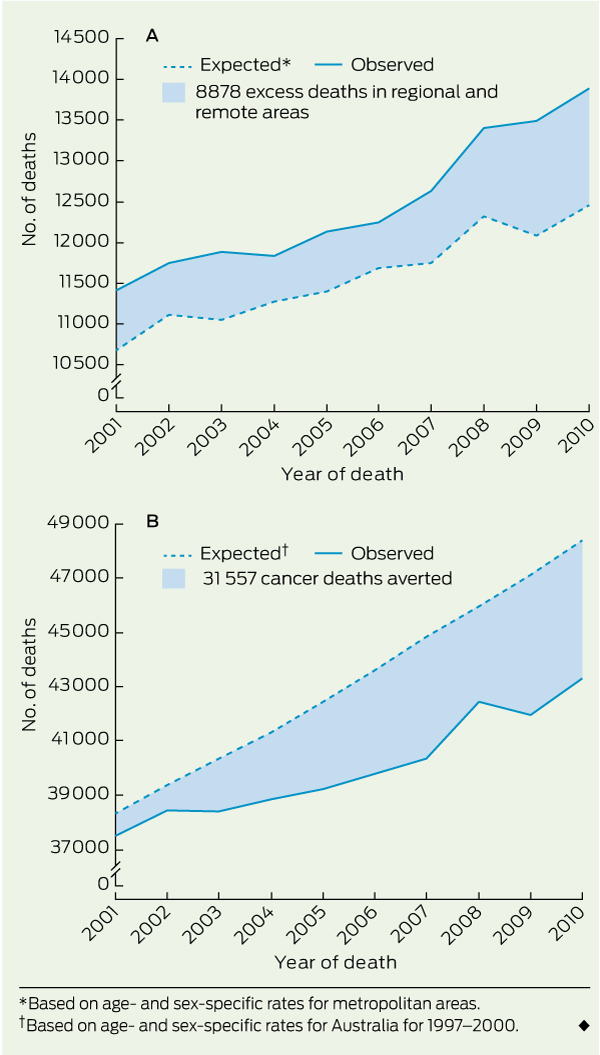