Dorothy (Billie) Greening was born on 13 April 1917 in Sydney. Her father was a confectioner, and she had one brother and three sisters. The family moved to Glen Innes, where she gained her leaving certificate and topped the class. Billie trained as a nurse at Prince Henry Hospital in Sydney and studied midwifery at Crown Street Women’s Hospital. In 1943, she joined the Australian Army Nursing Service, serving in Tripoli, Crete, Borneo and Singapore.

After the war, Billie studied medicine at the University of Sydney. On graduating in 1956, she became a resident medical officer at Sydney Hospital and joined the Army Reserve. She then trained in obstetrics and gynaecology at Crown Street Women’s Hospital, where she worked as a midwifery sister to fund her studies. Her fellow trainees were surprised to see her take a place at the senior sister’s table during tea break.

In 1961, she moved to England, where she furthered her specialisation in obstetrics and gynaecology, worked as a registrar in Sutton-in-Ashfield and Grimsby, and served in the London General Hospital Territorial Army.

In 1964, Billie returned to Australia to set up a specialist practice at Wingham in New South Wales, which she continued until she retired in 1986.

In retirement, Billie lived at Hallidays Point and travelled extensively. She was a philanthropist, establishing the Dorothy Greening Scholarship for the Faculty of Medicine at the University of Sydney, and scholarships at Taree and Wingham high schools for students to attend university. She swam regularly at the Black Head ocean pool and was the oldest lap swimmer at the age of 88 years — when the pool was threatened with closure, she donated money to keep it open.

Billie fell and broke her hip while walking her dog. After a period of care in a nursing home at Tuncurry, she died on 10 June 2012. 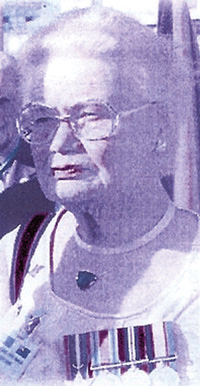