Objective: To describe the prevalence and distribution of alcohol consumption during pregnancy in an Australian population over a 5-year period.

Design, setting and participants: Cross-sectional repeated sample, trend analysis of aggregated and stratified alcohol consumption patterns during pregnancy. Pregnant women were enrolled from 2007 to 2011 in the Griffith Study of Population Health: Environments for Healthy Living, a birth cohort study being conducted in south-east Queensland and north-east New South Wales.

Conclusions: This study showed a steady and statistically significant decline in the proportion of women who reported drinking alcohol during pregnancy from 2007 to 2011. To further reduce these levels, we need broad public health messages for the general population and localised strategies for high-risk subpopulations.

Alcohol consumption during pregnancy may contribute to birth defects, growth and developmental abnormalities, and fetal mortality.1-3 In 2009, the National Health and Medical Research Council (NHMRC) revised its guidelines, recommending that the safest option for pregnant women, and women planning a pregnancy, was to not consume alcohol at all.2

Although Australia conducts routine National Drug Strategy Household Surveys, changes made in 2010 to the survey questions about alcohol use during pregnancy — to incorporate drinking before and after knowledge of pregnancy — preclude direct comparisons over time.4 Thus, we aimed to describe the prevalence and distribution of alcohol use during pregnancy in an Australian population over the 5-year period 2007 to 2011.

Participants completed a baseline, self-administered questionnaire, which included items from the 2004 National Drug Strategy Household Survey6 relating to alcohol consumption, modified for pregnancy. Images and information about different alcohol types and what constitutes a standard drink were provided.6 Participants were asked about alcohol consumption (any level) and high-risk alcohol consumption (five or more standard drinks on any one occasion) at early, mid and late pregnancy (0–13, 14–26 and 27–42 weeks, respectively). They were also asked about low-level alcohol use, which was defined as consuming between half a standard drink and two standard drinks on any occasion. Data on maternal age, education, marital status, income, smoking and recreational drug use were also collected.5

From 2007 to 2011, 2743 pregnant women were enrolled in the EFHL study (age range, 16–52 years). Alcohol consumption data were available for 2731 of them, and 1206 (44.2%) reported drinking alcohol at some time during pregnancy. In total, 917 women (33.7%) reported consuming alcohol after the first trimester of pregnancy, when they would have been aware of their pregnancy, and 68 women (2.5%) reported drinking at high-risk levels after the first trimester (Box 1).

Sociodemographic patterns of alcohol use

The proportion of women consuming low levels of alcohol after the first trimester significantly increased with increasing age (P < 0.001), increasing levels of education (P = 0.01) and increasing household income (P < 0.001). Women who smoked cigarettes and used recreational drugs during pregnancy were more likely to consume alcohol (P < 0.001 for both) (Box 1).

Temporal patterns of alcohol use

Despite the overall decrease in alcohol consumption after the first trimester of pregnancy from 2007 to 2011, no significant decrease was found for women older than 35 years (P = 0.11), single parents (P = 0.07), those in the lowest household income quintile (P = 0.54), those with a trade or apprenticeship education (P = 0.28) or those who used recreational drugs (P = 0.13). Also, there was no significant change in high-risk drinking patterns after the first trimester for any sociodemographic group over the 5 years.

This study shows a steady and statistically significant decline in the proportion of women who reported drinking alcohol during pregnancy from 2007 to 2011. The proportion of women who continued to drink alcohol after their first trimester of pregnancy also declined. It is possible that increased media emphasis on the negative effects of alcohol during pregnancy7,8 may have increased underreporting of alcohol consumption during the study period, thus resulting in this overall decline. Although alcohol consumption in the general population also declined during the study period,9 this study showed no change in alcohol consumption after the first trimester for older women, single parents, low-income women, women with a trade or apprenticeship education, or women who used recreational drugs. Further, the proportion of women who reported high-risk drinking (five standard drinks or more on any one occasion) did not change over the 5-year period. This finding may have been related to the small sample size, but it is also possible that public health programs and national policies are not reaching women who are most at risk of having babies with alcohol-related birth defects.

Given that the sociodemographic composition of the cohorts did not change across the 5 years of recruitment,15 the findings are not likely to be a result of random variation in participant sampling or demographic shifts in the study region. Nevertheless, it is possible that the study was biased slightly towards women with lower levels of alcohol consumption, because inclusion in the study was dependent on reaching the third trimester of pregnancy.2 Women who had experienced early fetal loss, which may have been associated with high levels of alcohol consumption, were not included.

The most recent Australian guidelines advocate abstinence from alcohol during pregnancy. Although our results suggest that national alcohol and pregnancy policies and public health programs may have had some effect in reducing population-level alcohol use by pregnant women, these may not affect the behaviour of specific at-risk groups. Thus, it is necessary to provide broad public health messages for the general population and more localised strategies for high-risk subpopulations.

2 Proportion of women who consumed alcohol during pregnancy, by level of consumption and stage of pregnancy, 2007–2011 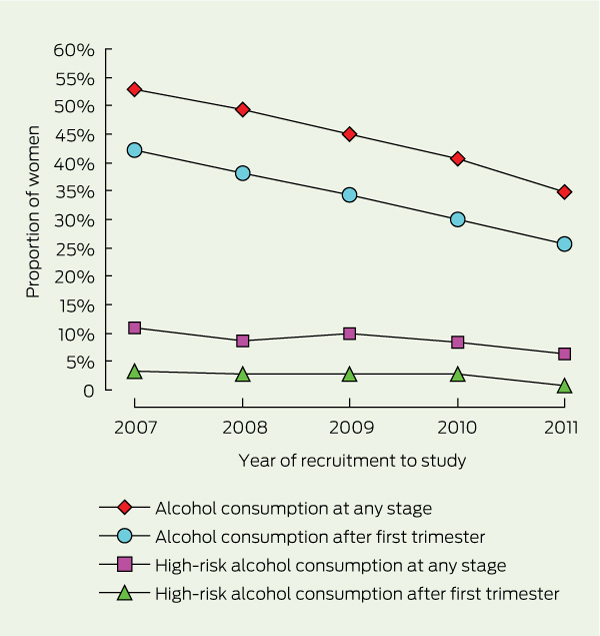 This research is part of the EFHL study, which receives core funding from Griffith University and is also funded by an Australian Research Council Discovery Project grant (DP110105423). The EFHL study was conceived by Roderick McClure, Cate Cameron, Judy Searle and Ronan Lyons. We gratefully acknowledge the chief investigators, project, administrative and research staff, and hospital antenatal and birth suite midwives of the participating hospitals for helping to conduct the study. Cate Cameron was supported by a Public Health Fellowship (ID 428254) from the NHMRC.