Graeme Lim was born on 29 December 1946 in Bandung, Indonesia. His arrival in Queensland at the age of 16 was an immense culture shock. He had no parents here and the White Australia Policy was in force.

Graeme attended St Paul’s School in the Brisbane suburb of Bald Hills, mastered English, entered the medical course at the University of Queensland, studied hard and drove a taxi at night. He began his life of following Jesus Christ through the Overseas Christian Fellowship and taught himself music to play the organ for worship.

After graduating in 1971, he was a registered medical officer at Ipswich Hospital and Princess Alexandra Hospital, Brisbane, and a registrar at Greenslopes Private Hospital and Royal Brisbane Hospital. In 1980, he achieved Fellowship of the Royal Australasian College of Surgeons and began serving the people of Ipswich as their full-time resident ear, nose and throat surgeon. He was on call 24/7 for public as well as private patients. Graeme gave his time generously to his patients, but also gave his family maximum quality time, which they remember with deep joy. All through his life, professional and private, he demonstrated two qualities many times over — graciousness and patience. It was a privilege to witness both these “gifts of the spirit” in his life; an example to all who came in touch with him.

In 1975, Graeme married Coby van Wijk, a registered nurse. Their beautiful loyalty to each other was seen in their raising of five children and in the whole family’s dedication to Graeme’s care when he suffered a devastating stroke in 2004. Medical complications of systemic lupus erythematosus led to years of home and hospital haemodialysis. Graeme’s characteristic uncomplaining cheerfulness and patience marked his faith. Even when severe chronic disease stripped most things out of his life, he remained joyful and gave glory to God. Though his heart and flesh failed him, he rejoiced with the psalmist, “My flesh and my heart may fail, but God is the strength of my heart and my portion forever” (73:26).

Graeme died on 2 October 2012 and is survived by Coby and their children Esther, Andrew, Stephen, Rachel and Aleisha. 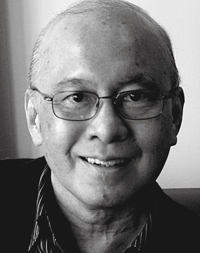