Objective: To describe human hydatid disease in Tasmania since 1996, the year that the state was declared provisionally hydatid-free.

Design, setting and participants: Individuals with a new diagnosis or history of hydatid disease between January 1996 and July 2012 were identified through a number of sources including public health notifications, discharge coding from Tasmanian public hospitals, and the Royal Hobart Hospital pathology laboratory information system. Individuals were included if they fulfilled the case definition. Details regarding their diagnosis, management and risk factors were obtained by interview, review of medical notes, or both. The information was collected and analysed over a 3-month period from 30 July 2012 to 30 October 2012.

Results: Fifty-one patients were identified, of whom 41 met the case definition. Twenty-five represented new diagnoses between 1996 and 2012. Median age was 71 years (range, 44–99 years). There were 21 women and 20 men. Thirty-eight patients had hepatic disease, five of whom had at least one other site involved. Four had extra-abdominal disease. Twenty-nine patients could be assessed for possible time and place of hydatid acquisition and all had significant risk factors for hydatid acquisition before 1980. Ten of the 25 patients diagnosed between 1996 and 2012 had been notified to the Tasmanian Department of Health and Human Services.

Human hydatid disease, or echinococcosis, is a helminthic infection that leads to the formation of fluid-filled cysts in the liver, lungs and other organs. Echinococcus granulosus, which causes cystic echinococcosis, or unilocular cyst disease of viscera,1 is the only member of the genus Echinococcus to be found in Australia. It was introduced into Australia during the early period of European settlement and had been described in domestic animals before 1840.2

E. granulosus is a cyclozoonosis, requiring at least two species of vertebrates as definitive and intermediate hosts (Box 1). Dogs and other canids such as dingos and foxes are definitive hosts and infection occurs following ingestion of metacestodes (cysts) in mammalian organs, leading to the shedding of infective eggs containing larval oncospheres in the faeces. The intermediate host is infected following ingestion of infective eggs. The intermediate host range is broad and regionally specific.3 It includes domestic and feral ungulates such as sheep, goats, pigs, camels and buffaloes, and marsupials such as kangaroos and wallabies.4 This broad host range has resulted in the establishment of domestic and sylvatic cycles, which in some regions may intersect.

Humans are infected as intermediate hosts. Following egg ingestion, the oncosphere is absorbed through the intestinal wall and deposited via the circulatory system to various organs, with subsequent cyst formation. The most common sites of human disease are the liver (> 65%) and lungs (20%).3,5 Other less commonly affected areas include other intra-abdominal sites such as kidney, spleen, peritoneal cavity and, more rarely, spine, brain, heart and bone.3 Infection in some sites, particularly the liver, may remain asymptomatic for many years and is usually diagnosed well into adulthood, often incidentally. Conversely, disease in the central nervous system becomes symptomatic and presents much sooner after initial infection.

During the past century, Tasmania experienced one of the highest rates of human hydatid disease in the world,6,7 perpetuated by a hydatid life cycle involving dogs and sheep. Between 1957 and 1967, 28 fatal human cases were recorded.7 Estimates of human disease based on surgical cases in the 1950s and early 1960s ranged from 92.5 to 151 cases per 100 000 population per decade.8,9 At this time, the Australian annual rate was 1.6 per 100 000 human population nationally and 7.8 per 100 000 in rural areas.10 Surveys of slaughtered sheep in different Tasmanian regions in 1963 revealed a hydatid prevalence of 35%–73%,8 and surveys of rural dogs reported a prevalence of 12.7%.6

Increasing concern regarding the human health impact of hydatid disease led to the formation of the Tasmanian Hydatids Eradication Council in 1962.6 A systematic campaign commenced in 1965. This encompassed regular testing of dog faeces, anthelmintic treatment of dogs, examination of abattoir-slaughtered sheep, community education regarding safe slaughtering practices and farm hygiene, and the prohibition of feeding offal to dogs.6

The eradication campaign resulted in a rapid and significant reduction in the prevalence of hydatid infection among dogs and sheep,11 and the surgical incidence of hydatid disease among humans.12

Tasmania was declared provisionally hydatid-free in 1996. Since then, abattoir surveillance has continued but there has been no systematic review of human hydatid cases in the state. As new cases continue to be detected, we undertook a retrospective case review to determine the features of human hydatid disease in Tasmania after the provisional declaration of eradication and, in particular, to determine if there is evidence of acquisition of disease after the early 1970s.

From 30 July to 30 October 2012, systematic data collection was undertaken to identify cases of hydatid disease in patients who presented to medical practitioners in Tasmania from January 1996 to July 2012. Approval for the study was obtained from the Human Research Ethics Committee (Tasmania). Patients undergoing serological testing for hydatids were identified from the Royal Hobart Hospital Department of Pathology laboratory information system. Hospital admissions were identified from discharge coding data from all major Tasmanian public hospitals (Royal Hobart, Launceston General, Mersey Community and North West Regional) and the Royal Hobart Hospital Microbiology and Infectious Diseases Unit consultation database. Permission was obtained from the Director of Public Health to access the Department of Health and Human Services notifications for hydatid disease for the years 1996–2012.

Identified patients were contacted by telephone by the study coordinator to obtain consent to participate in the study. If verbal consent was given, participants were mailed a consent form to complete and return. After written consent was received, the participants were interviewed by telephone using a standardised question-naire, and hospital records were used to obtain additional information. Information for patients who had died or could not be contacted was obtained from the medical record.

Data variables collected included current age, sex, year of and age at initial diagnosis, symptoms at dianosis, site of disease, results of diagnostic imaging and serology (if performed), and date and type of surgical management. Participants were asked to estimate the likely region and time of acquisition.

Fifty-one patients with possible cases of hydatid infection were identified, of whom 41 fulfilled the case definition. Median age for patients was 71 years (range, 44–99 years). There were 21 women and 20 men. Patient demographics and clinical features are summarised in Box 2. Two patients were born after 1965: one in 1967 and one in 1968.

Assessment for attributable exposure was possible in 29 of the 41 patients who fulfilled the case definition and in 20 of the 25 patients diagnosed from 1996 to 2012. All 29 patients could identify a period during which they had regular close contact with sheep-farming areas or offal-fed dogs and subsequent high-risk exposure for hydatid acquisition. Of these, 26 patients could identify such high-risk exposure before 1965. Of the remaining three patients, two described significant exposure to sheep farms in the late 1960s to early 1970s. The remaining patient could only recall significant exposure from the late 1970s.

Our study demonstrates that hydatid disease persists in Tasmania, albeit at a low rate. Currently, just over one new case is diagnosed per year. It is expected that this rate will remain stable for the next two to three decades, as patients present with symptoms related to their cysts, or as cysts are found incidentally during investigations for unrelated disorders.

Our study has found no evidence of hydatid transmission in Tasmania between 1996, the year that the state was provisionally declared hydatid-free, and 2012. A preponderance of hepatic disease and paucity of childhood and extrahepatic disease, as found in this study, is observed in regions where local transmission has ceased.6,13

It has previously been estimated that human hydatid transmission had ceased in Tasmania by 1974, possibly by as early as 1970.6,14 This conclusion was based on data that demonstrated the absence of hydatid disease in children born shortly after the program was introduced. The trend of increased median age at diagnosis since 1965 among study subjects (Box 2) and the fact that no subject was born after 1968 support the suggestion that human hydatid acquisition ceased well before 1996. All but one of the 29 patients assessed for time of hydatid acquisition described risk factors before the mid 1970s. The remaining patient moved to a sheep-farming region in the late 1970s, at which time the prevalence across the state in rural dogs was estimated at 0.2%.11

Management of hydatid disease remains primarily surgical, with adjuvant anthelmintic therapy. Surgical rates were slightly higher in patients diagnosed between 1996 and 2012; however, this may be due to incomplete data collection rather than a true change in practice. Puncture, aspiration, injection and reaspiration therapy was only employed for two patients. This may reflect a lack of expertise with this technique within Tasmania or that patients are presenting with complex disease in which the therapy would not be appropriate.

E. granulosus infection continues to occur widely in mainland Australia, predominantly in cooler regions with high rainfall, and it is estimated that 80–100 patients are diagnosed with hydatid infection per year in Australia.15 A survey of New South Wales and the Australian Capital Territory from 1987 to 1992 found the highest prevalence in the shire population of north-east and south-east NSW, with a mean annual prevalence of up to 23.5 cases per 100 000 population,15 a rate comparable to that of rural Tasmania before eradication. The sylvatic life cycle established in many mainland regions will be a significant obstacle to eradication from mainland Australia.2,15-18

Estimating the true prevalence of human hydatid disease in Australia is hampered by the poor quality of notification data, which has been repeatedly demonstrated to underestimate the true incidence of the disease.15 Our study found a notification rate of just 40%. Reasons for such poor notification rates are likely to be multifactorial. However, a lack of awareness of the requirement to notify cases and the perception that human hydatid disease is no longer a disease of public health importance in Tasmania are likely to be contributing factors.

The threat of recurrence in Tasmania remains. A new focus of infection was identified in 1988 on King Island, north of Tasmania, where hydatids had not been detected since 1971.19 The source of the outbreak was never identified, and typing of the isolates found them to be genetically distinct from Tasmanian and mainland Australian strains. In 1997, a single sheep and cow were found to have hydatid cysts.9 The source was traced back to a dog that had been introduced from mainland Australia. Since then it has been mandatory to dose any dog being brought to Tasmania with praziquantel before arrival. It remains illegal to feed offal to dogs.

Our retrospective study has limitations due to incomplete patient information and the use of public hospital-based case ascertainment. As a result, we will have failed to capture patients managed in private hospitals or conservatively by general practitioners and surgeons. Nonetheless, the study confirms that human hydatid disease continues to be frequently seen in Tasmania in patients exposed before and after eradication. Most significantly, it demonstrates the likely success of the Tasmanian Hydatids Eradication Council in eliminating transmission of hydatid disease within Tasmania. 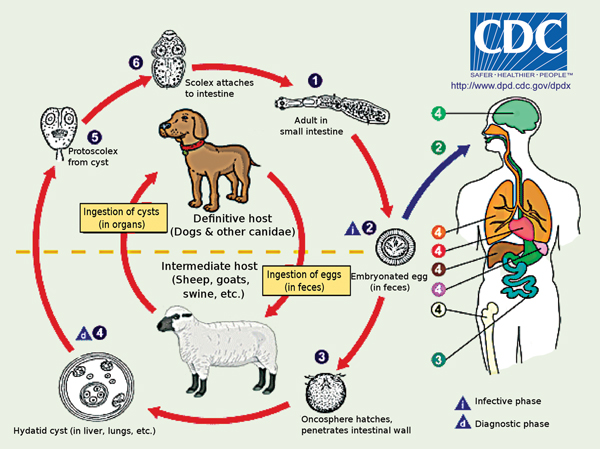 Source: DPDx Laboratory Identification of Parasites of Public Health Concern. Echinococcosis [internet image library]. Atlanta: Division of Parasitic Diseases and Malaria, Centers for Disease Control and Prevention. http://dpd.cdc.gov/dpdx/HTML/ImageLibrary/Echinococcosis_il.htm (accessed Feb 2013). The adult worm resides in the small intestine of the definitive host (1). It releases eggs into the environment (2), which are then ingested by an intermediate host. In the small intestine of the intermediate host, the oncosphere hatches, penetrates the intestinal wall (3) to enter the bloodstream, whereby it migrates and is deposited in other organs (4) and forms a cyst. The cyst produces protoscoleces (5). The cycle is complete when the intermediate host is eaten by a definitive host and ingests the protoscoleces, which go on to develop into the adult worm.

3 Number of new echinococcosis diagnoses per year in Tasmania, 1967–2012 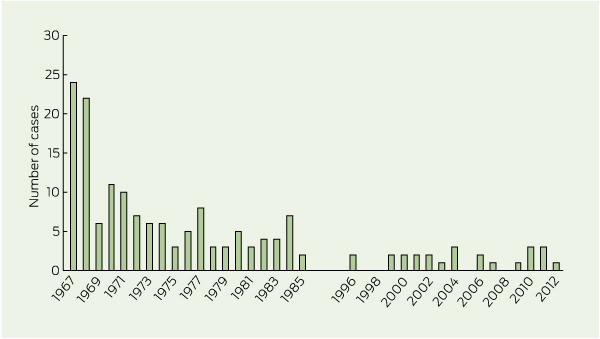