We report the first and only known case of envenoming by the Lake Cronin snake (Paroplocephalus atriceps), which is closely related to Hoplocephalus spp. A 24-year-old man was bitten while photographing the holotype of the species. He developed venom-induced consumption coagulopathy but no neurotoxicity or myotoxicity, similar to the clinical features of Hoplocephalus envenoming. He was treated with polyvalent antivenom and made a full recovery.

In October 1979, a venomous snake was collected at Lake Cronin, a freshwater lake in the semi-arid southern interior of Western Australia. It was the first available live specimen of a hitherto undescribed species. One of us (S K W), then a 24-year-old man with no significant past medical history, was bitten on the fingers of his right hand while photographing the specimen. He initially ignored the bite and continued taking photographs but started feeling unwell within 15 to 30 minutes, with a severe headache, generalised diaphoresis and vomiting. He washed the wound and applied a tourniquet to his right arm. He did not have dizziness or syncope but had some pain at the bite site.

This report describes the first and only known case of envenoming by the Lake Cronin snake (Paroplocephalus atriceps; Box 2). At the time, the snake was an undescribed species but it has subsequently become the holotype. The holotype is the original name-bearing snake specimen, which is used to formally describe the species and against which all future identifications are made.

The Lake Cronin snake is the sole member of its genus and is closely related to the clinically important broad-headed snakes (Hoplocephalus spp) of eastern Australia. It is known only from woodlands and granite outcrops around Lake Cronin (between Perth and Norseman) and Peak Eleanora in WA.1 Very few specimens have been collected since its first description and they remain poorly studied. Like Hoplocephalus spp, they are known to be kept in captivity because they are uncommon and unique snakes.2,3

After the snake’s original description in 1980 as Brachyaspis atriceps,4 it has been subject to somewhat confusing taxonomic rearrangements, including its placement in four separate genera. It was finally reclassified in 2000 and is now treated as a monotypic genus, Paroplocephalus,5 a sister genus to the eastern Australian Hoplocephalus.

The major clinical feature of envenoming by P. atriceps in this patient was venom-induced consumption coagulopathy (VICC), characterised by prolonged PT and aPTT, a low fibrinogen level and high levels of fibrinogen degradation products. This clinical presentation, with VICC and systemic symptoms, was similar to that seen in bites by Hoplocephalus spp, and there was no evidence of neurotoxicity or myotoxicity.

The patient was treated with one vial of polyvalent antivenom with no untoward effects. However, polyvalent antivenom does not currently cover Hoplocephalus spp, as the horses used to create the antivenom are not immunised to this species, and it is unlikely to ever cover such a rare snake as P. atriceps. Fortunately, Australian elapid venoms contain similar groups of toxins and there is likely to be cross-neutralisation of these. This has previously been shown for brown snake, taipan and death adder venoms.6 Binding studies show that although tiger snake antivenom does bind Hoplocephalus venom, the binding is much less than for tiger snake venom.3 Given that P. atriceps is very closely related to Hoplocephalus snakes, and that monovalent antivenoms available in Australia (CSL Ltd) are in fact polyvalent,7 it would seem reasonable to administer one vial of tiger snake or brown snake antivenom in cases of P. atriceps envenoming.3 The use of polyvalent antivenom or multiple doses of monovalent antivenom is likely to increase the risk of systemic hypersensitivity reactions,2 and there is no evidence to suggest it would be more effective. In addition, the major manifestation of P. atriceps envenoming in this case was VICC, and a previous study has suggested that antivenom may not speed the recovery of VICC in envenoming by Australasian snakes, including brown snakes, tiger snakes and taipans.8

Despite the long period between the case and this report, it is important to document the clinical and laboratory effects of another highly venomous snake that was previously unknown to the medical community in Australia, even if the probability of bites occurring in the wild is very low. These snakes may be kept by collectors and it has previously been shown that snake handlers are more likely to be bitten by uncommon types of snakes, including Hoplocephalus spp.2 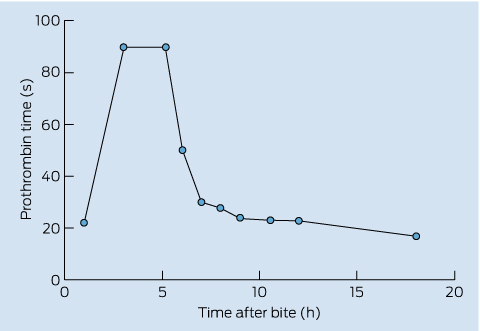 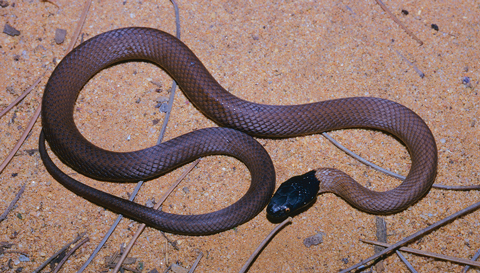